94 Take the Cake is capturing the attention of customers with its unique storybook appearance created at the hands of owner Sherry Lindenback and several Elma Street artists.
0
Jan 23, 2020 12:00 PM By: Tammy Rollie 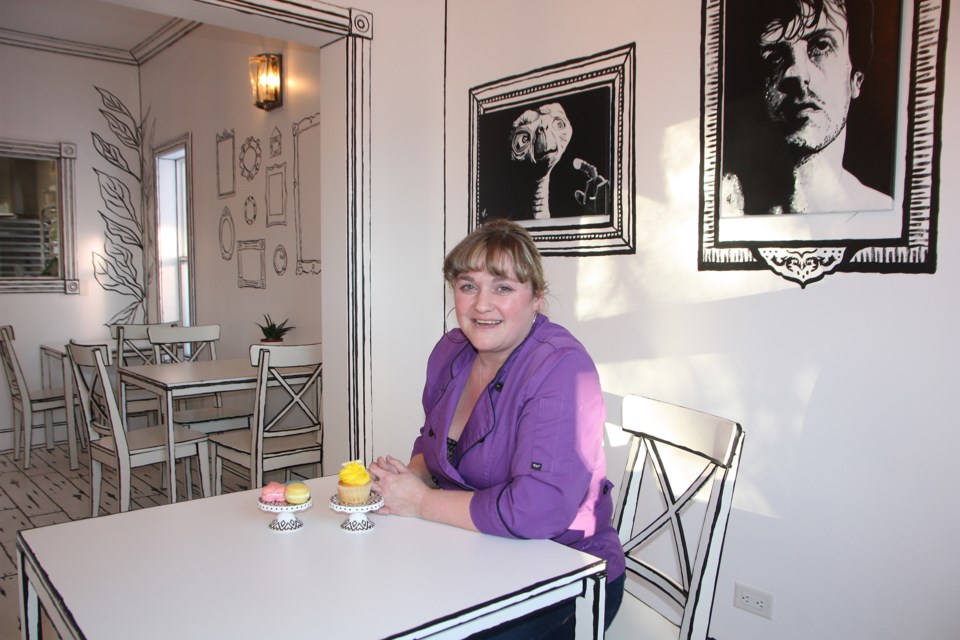 94 Take the Cake owner Sherry Lindenback sits with colourful sweets in her newly-designed bakery, which has become all the rage across social media. (Tammy Rollie/Western Wheel)

A popular Elma Street bakery known for its savoury sweets has gone two-dimensional with the help of neighbouring artists.

Sherry Lindenback, owner of 94 Take the Cake Bakery, collaborated with six artists to transform her café’s grey walls into something of a two-dimensional colouring book.

“The idea was to collaborate, have local artists come in and be part of the project,” she said. “Once they knew what the concept was everybody was excited to be involved.”

Lindenback, who has a background in interior design, came up with the vision after seeing similar décor online in cafes in Korea and Japan. She got to work right after Christmas putting the concept into reality.

“I had a few employees grab a paintbrush here and there,” she said. “I got about 80 per cent done when I called in some of my artist friends to do some collaboration.”

After reaching out to Lineham House Galleries co-owner Cheryl Taylor for assistance, Lindenback soon had the help of Janifer Calvez, Alyssa Koski, Russell Thomas, Jennifer Stables and Robin Thibodeau, as well as Taylor, who spent two days adding their own personal touches.

“The vision behind it is, when people come in, the focus becomes not the surroundings anymore it’s the people and the food,” said Lindenback. “Those things really pop and really stand out. It really takes it back to community and what’s important.”

The new look is all the rage on social media, and Lindenback hopes it inspires Instagramers to make her bakery a must-visit destination.

“The response has been unbelievable,” she said. “People love that it’s different and it really brings back the focus to the people and the food. I’ve had many people reach out to me about photo shoots and photo sessions. It’s definitely stimulated some great action on Elma Street.”

Stables, a children’s book illustrator under the name Jenny Dale Designs and an art instructor, said when she learned of Lindenback’s call for help she immediately jumped on board.

“I put on my painting clothes and knocked on Sherry’s door,” she said. “I thought it was really unique, really bold. It just shows that Sherry has so much vision.”

Stables’ contributions included two-dimensional shelves with a vintage radio and fan, a collection of gallery-style frames, eight mice throughout the café and numerous “94s” hidden throughout.

Each time Stables enters the bakery, she said it’s like walking into a storybook.

“You really do get that sense that you just stepped into a drawing,” she said. “I’m just absolutely in love with it.”

“A lot of people that are in 94 Take the Cake are of that ilk and can connect to it immediately,” he said of his character choices. “It helps introduce the young people to some of the things we grew up with. Without even thinking about it you connect the memory from childhood as you walk into this two-dimensional cartoon colouring book world.”

Thomas, who owns Birdsong Studio and Healing Centre on Elma Street, admits the idea didn’t come to him immediately when Lindenback shared her vision.

“I had a number of pieces on display (at 94 Take the Cake) that were exactly the opposite of the direction she was headed in,” he said. “I was creatively stumped by it. I’m generally a colour person.”