An iconic symbol of the prairies fills a picturesque art centre in a plethora of mediums. The Leighton Art Centre opened its new exhibit, Bison, Bison, Bison, featuring the works of 17 artists from across the region on June 16 in the main gallery.
Jun 20, 2018 7:57 AM By: Tammy Rollie 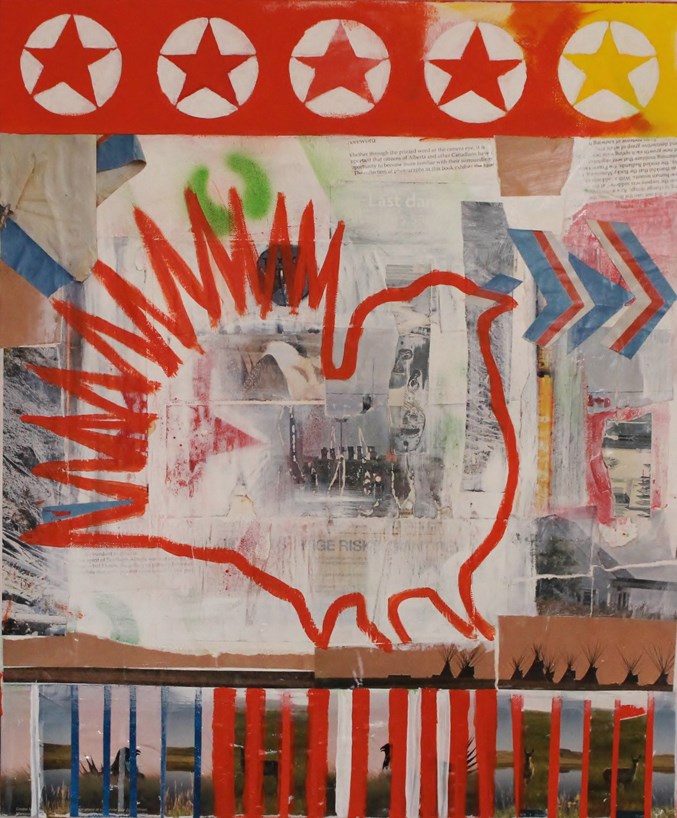 The works of Foothills artist Bruno Canadien are among those on display in the Leighton Art Centre’s exhibit Bison, Bison, Bison.

An iconic symbol of the prairies fills a picturesque art centre in a plethora of mediums. The Leighton Art Centre opened its new exhibit, Bison, Bison, Bison, featuring the works of 17 artists from across the region on June 16 in the main gallery. It will run until Sept. 23. Curator Stephanie Doll said the art show celebrates the continued existence of the plains bison in Alberta. “The bison have been reintroduced into Banff National Park and a lot of reserves in the area have worked on the Buffalo Treaty and are also committed to bringing bison back to the land,” she said. “Although there’s a lot of people farming them there’s a commitment to get them back into the ecosystem in a natural way.” When putting the word out to local artists about the upcoming exhibition, Doll said she had no problem getting submissions for the curated show. “We didn’t just want people painting bison on a whim, we wanted to get artists whose work had elements of bison in it already,” she said, adding the pieces range from paintings and sculptures to an installation of puppets. “It’s the first time we’ve done a thematic show like this where we’ve chosen one subject matter. I was really interested to see all the ways they could interpret the buffalo.” The pieces selected for the show reveal the abundance of talent in the region, said Doll. ”The quality of work is outstanding,” she said. “They’re all professional artists.” Doll said they didn’t limit the exhibit to just bison, but allowed artists to capture that era with pieces representing other animals connected to the bison like ground squirrels, pronghorn antelope and wolves. Black Diamond painter Bruno Canadien is representing the theme with two small acrylic collages from his Petrolgraph series. “My work specifically doesn’t feature bison but they do speak about ecology and prairie environment,” he said. Canadien, a graduate of the Alberta College of Art and Design, said he was asked by Doll to submit work for the show and felt the pieces really spoke to the ecology that existed when bison roamed the earth. “They were a key species,” he said. “They maintained that prairie ecology for all the other species, particularly the sage grouse which actually are featured prominently in these paintings.” Chain Lakes artist Donna Wilson is exhibiting a small, bronzed buffalo she made and applied patina (a coating consisting of various chemical compounds) white in honour of the white bison, Titon, that lived on John Scott’s ranch near Longview until it passed away last year. “It’s such an iconic animal,” she said. “They’re such a symbol of the past and this area. I think people never get tired of looking at them.” Wilson, who recently opened a private studio gallery on her ranch, said this is her first time exhibiting at the art centre. “I’m thrilled to be a part of it,” she said. “It’s a wonderful place.” Wilson’s friend and former business partner Debra Garside is exhibiting two large photographs of Titon, as well as a picture of a buffalo herd on the skyline with the mountains in the background. The subject will also be represented in the form of five-inch-tall glass figurines created by Black Diamond glassblower Tyler Rock. Although they’re not accurate portrayals, Rock said they represent the physique and movement of bison and will be displayed as if they’re falling off a cliff. Rock, a graduate of ACAD, created the buffalo more than five years ago when commissioned by oil sands company Syncrude to create pieces for a permanent collection and gifts for employees. “The bigger overarching reason I made them is my father has been a bison rancher in northern Saskatchewan for many years now,” he said. “There’s this feeling of bison completing the landscape. Sometimes when we go into the field we can’t find them anywhere and all of a sudden they’re there.” Exhibiting his glasswork at the Leighton Art Centre is not new to Rock. “We’ve had a few shows there over the years,” he said. “We like showing there because of the incredible views and it really feels like a comfortable place to spend time. It’s a great venue.” The Leighton Art Centre is open Tuesdays to Sundays from 10 a.m. to 4 p.m. Admission is by donation.