Work to expand and improve Turner Valley’s water treatment plant is expected to begin this summer and once complete the facility will be capable of providing water for four municipalities.
Jul 9, 2014 12:00 AM By: Tammy Rollie 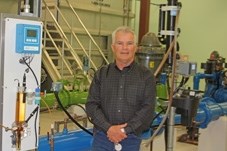 Barry Williamson, Quad Regional Water Partnership chairman, stands inside the water treatment plant in Turner Valley on Monday. work to expand and improve the plant is expected to begin this summer.

Work to expand and improve Turner Valley’s water treatment plant is expected to begin this summer and once complete the facility will be capable of providing water for four municipalities.

Black Diamond, Turner Valley, the MD of Foothills and Longview entered into an agreement called the Quad Regional Water Partnership (QRWP) in 2012 to share water services, with Longview joining in future years, but the project wasn’t expected to start for years.

The need changed after Black Diamond’s water treatment plant was destroyed in the 2013 flood, prompting the provincial government to cover the estimated $7 million price tag to get the expansion project started as soon as possible. The expansion and improvements should be complete by the end of 2015.

“It has allowed us to go forward,” said QRWP Chairman Barry Williamson. “It’s better off to expand and upgrade than replace it (Black Diamond’s water treatment plant). It’s saving millions of dollars.”

With that project complete and plans now secure for the expansion and upgrade of Turner Valley’s plant, Williamson said a tender was awarded and construction should begin in weeks.

Among the additions to the plant will be a granular activated carbon filter system to remove odours and colours from the water and an additional water tank used to treat water supplied by the raw water reservoir.

In addition, existing pressurized chlorine gas tanks will be replaced with a liquid form, providing a safer environment for employees, said Williamson.

He said the gas is 100 per cent chlorine and would be deadly to anyone in the immediate area if released into the environment, whereas the liquid form consists of 12 per cent chlorine, which would be much safer in the event of exposure. He said water treatment is the same in both forms.

Once the expansion and improvements are complete, the facility will operate as a corporation under the title Sheep River Regional Utility Corporation.

The corporation will be owned by the Towns of Black Diamond and Turner Valley at 45 per cent each, and 10 per cent by the MD of Foothills, he said.

The operation will likely be set up as a wholesale business, selling treated water to the municipalities with the assets divided between the three municipalities, Williamson said.

“We’re looking to set it up as a wholesale business at the time and reviewing how to get to a retail model,” he said. “We have to be clear on what the model is going to look like.”

In the meantime, the water situation will remain the same for Black Diamond and Turner Valley residents.

Williamson said Turner Valley currently accesses about 1,000 cubic metres of water a day, of which it is gaining about half in the raw water reservoir. The Town of Turner Valley is awaiting approval on two more water sources, which would add another 1,500 cubic metres daily.

Williamson said water consumption is increasing with the warmer temperatures and the two new water sources, if approved by Alberta Environment, will help fill the reservoir, but not result in lifting or lowering the water restriction level from its current level three to level two.

“I’m not sure what the demand is going to look like when you go from one level to the next,” he said. “We hope to get the reserve filled between now and the end of October.”