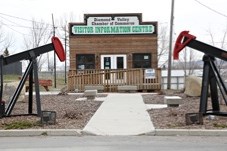 Diamond Valley&#8217; s Visitor Information Centre will be moving to Black Diamond by the end of June.

The 1800s style wooden shack containing information about activities in the area will be transported on a flatbed trailer from Turner Valley four-kilometres east to a lot south of the four-way stop in Black Diamond the end of June.

Plans for the move began months ago when Mike Kingston, owner of The Stop Coffee House & Gathering Place, offered a portion of land south of his restaurant to house the chamber’s visitor information centre.

Sandra Wiebe, past-president with the Diamond Valley Chamber of Commerce, expects the new location will increase visitors and the centre’s visibility. The Turner Valley location is set back from the highway.

“They get a lot of traffic that heads that direction every day in the summer time,” Wiebe said of the new location. “It’s in the heart of all that activity between those little shops.”

An agreement was signed between Kingston and the chamber outlining an annual price for use of the land, maintenance requirements and allowing centre visitors use of The Stop’s washroom facilities and wireless free Internet in exchange for the purchase of some washroom supplies. The visitor building does not have a washroom.

Kingston said the centre will be a great addition to nearby businesses.

“It will be interesting to see what kind of extra traffic it brings everybody,” he said. “I know other merchants are excited to have it. I think the VIC will benefit significantly from just the traffic that our business has in the summer time.”

If the location doesn’t work, Kingston said the chamber is welcome to relocate.

With his land not in use, he figured he would just put the offer out there.

“It’s just the right thing to do,” he said. “In the 11 years that I’ve been in business here you just become part of the community, the space is sitting there empty so let’s use it for something productive.”

Wiebe said the location provides a great alternative until a permanent location can be found.

“It’s buying us time,” she said. “When you are small like this, there is just not a lot of money to be able to buy a building and buy a spot and have a washroom and have a great big facility unless it’s funded somehow. Maybe one day we can buy a building with washrooms or build something more permanent.”

Monique Leblanc, Turner Valley chief administrative officer assistant, said the loss of the centre in Turner Valley will be supplemented with a satellite location at the Sheep River Library.

“It’s always disappointing to have a building that is being removed from the downtown core, however, understanding that this was a chamber decision we certainly respect that,” she said. “It does provide additional space to take the town square development into that area, which was the plan all along.”

Leblanc said the Town’s downtown revitalization project, which will include a market, town square and various businesses beside the library, would have involved relocating the centre to another area on site, but it wouldn’t have been able to remain in its current location once construction begins.

“In the interim going forward we really want to work with the chamber and businesses in general to find out how best to deliver information services for tourists that are coming through town,” she said.

Wiebe said at some point the chamber would have to find a new location for the centre.

“We are not by any means ignoring Turner Valley,” she said. “It almost makes it easier to say you are here (in Black Diamond) and you’ve done all these things, now you can go west and explore what the outdoors has to offer there.”

Chamber president Bev Geier said chamber members are discussing ways to make the centre self-sustaining, but nothing has been decided.

“I’d like to see it making some money,” she said. “We’re tossing a lot of things around.”

The centre is open Friday evenings, Saturdays, Sundays and holiday Mondays for the remainder of the season. Yet, Geier hopes next year it will make enough to allow for a more full-time staff member and get more information to tourists about what the area has to offer.

“I think this town could become a little more touristy,” she said. “You can get Europeans coming in the winter to go skiing and to see these kinds of things if the place was open a little more often than it already is.”

The Diamond Valley Chamber of Commerce recently created a pamphlet highlighting its members, which will be on display at the visitor information centre.