Dean Compton reflects on how the military has enriched his life
Nov 7, 2020 10:30 AM By: Brent Calver 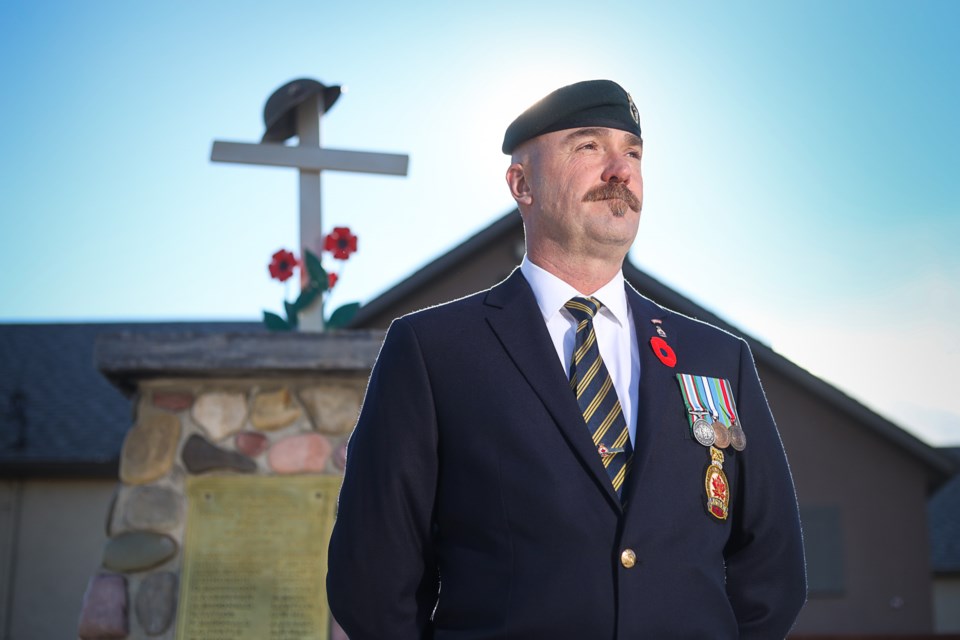 Canadian Army veteran Dean Compton poses for a portrait at the Turner Valley Legion on Oct. 30. Compton was a corporal in the Princess Patricia's Canadian Light Infantry and served for nine years, including UN missions in Cyprus and Croatia, as well as NATO missions to Norway. (Brent Calver/Western Wheel)

Brotherhood and camaraderie, and the odd game of football.

Recalling his eight and a half years of service and the good memories that come with it leaves Canadian Army veteran Dean Compton with a smile.

Compton, a former corporal in the Princess Patricia's Canadian Light Infantry 1st Battalion, has seen his share of the world serving in the forces.

He did a United Nations tour in Cyprus, as well as Croatia – the former Yugoslavia. Additionally, he served on two NATO tours in Norway and the Partnership for Peace NATO exercise in the southern United States.

His military career started long before he enlisted in 1988 though. Compton had nine years as an Army cadet under his belt before joining the regular force.

"I come from a long line of military people. It’s always been part of our life,” said Compton.

“My older brother, he just retired from artillery, and my niece is in the military now,” he said

Compton looks back fondly on his time in the army.

“The men, the comradeship. I spent six years in the reconnaissance platoon – it was probably my best six years,” said Compton.

One shining memory during his time was an event colloquially called the French Grey Cup – an annual football game between companies.

“That was probably the funnest time of the year,” he said.

The job came with its setbacks, not the least of which being post-traumatic stress disorder.

This was the sole reason he left the Army in 1996.

It’s an issue he sees a lot of his fellow veterans suffering, and one of the reasons he values his work through the Royal Canadian Legion.

Now president of the Turner Valley Legion, Compton continues his service by helping fellow veterans, as well as the community.

“Our mandate is to support veterans, seniors – regardless of whether they were in the military or not – the general public, and our communities,” said Compton. “There’s always a lot of people out there who call down the Legion for allowing civilians to be a part of it, but it’s the only way it can stay alive.”

Professionally, Compton has kept himself busy since his departure from the Army, working in the oil patch as a safety co-ordinator, 15 years as a volunteer and part-time firefighter with the Foothills Fire Department, and 15 years managing a mobile pressure washing company and is now a wastewater operator.

Compton says that if given the choice, he would do it all over again. His time in the army shaped who he is.

“Everything I learned there," he said. "From leadership to being a good person.”