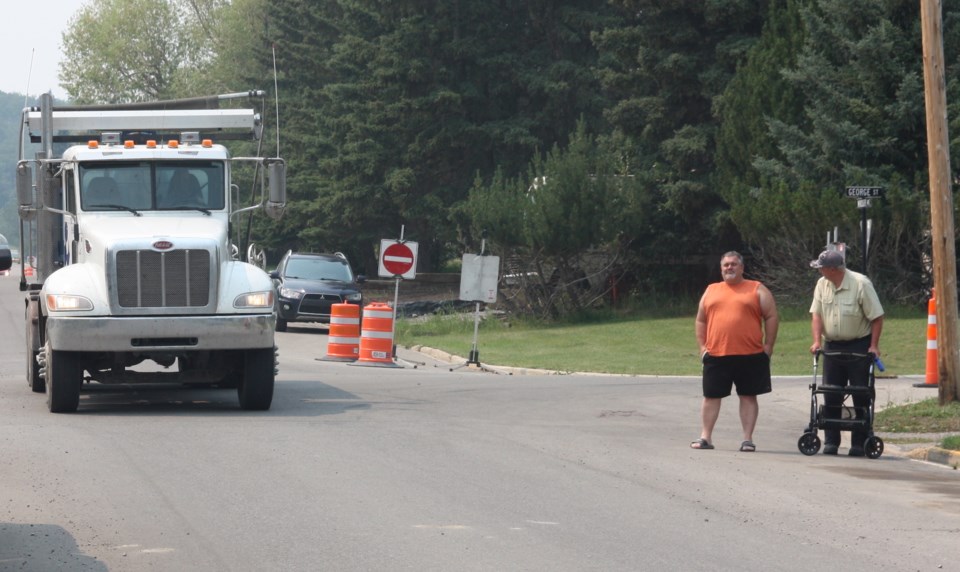 Dan Graham, left, and Rob Strom are concerned construction traffic being detoured down Windsor Avenue in Turner Valley is damaging the road in front of their homes. (Bruce Campbell, Western Wheel)

A Turner Valley resident said he is upset the road in front of his home is being damaged because upgrades to a major thoroughfare in town are taking place one block to the south.

“If you can see the pavement, it is rolling here from the weight — these roads weren’t designed for the big trucks,” said Dan Graham in front of his home on Windsor Avenue. “This street isn’t designed for heavy trucks.”

He said often fully-loaded tandem super-b transports are heading down Windsor Avenue as the road is being used as a detour for construction for Sunset Boulevard.

At present, Graham and other Windsor Avenue residents are paying $25 a month for 25 years for a debenture to pay for road improvements on the road made approximately two years ago. That’s an extra $7,500 over a quarter-century.

“They ripped it up, replaced a sewer and put pavement on it,” Graham said. “I was happy with that... Now they are destroying what I am paying for for the next 25 years.”

He said if the road is damaged, Windsor Avenue residents should not have to pay the levy.

Turner Valley Mayor Barry Crane said the Town will investigate to see if there is damage on Windsor.

“We will have to have an assessment done on that end to make sure the vehicles that are using that road as a detour aren’t overloaded,” Crane said. “The roads are built to a standard that should allow for that traffic to not destroy the road.

“We will definitely look into it... I would be mad too. If it was my road and it started buckling, I would be getting mad.”

Crane drove down Windsor on July 15 and in a text stated: “I drove the road just now and all seems to be in good condition. But we will monitor vehicles as needed and keep our eyes open for any violations.”

He said if portions of the road are getting beaten up, the damage should be fixed.

“The Town of Turner Valley’s existing roadways are laid out in such a way that all traffic detoured from Sunset Boulevard must use Edgar Avenue and Windsor Avenue to get around the construction zone; this includes all public and construction traffic,” she said in an email. “Well before the project began, transportation engineers determined that Edgar Avenue should be used for westbound traffic, and Windsor Avenue should be used for eastbound traffic; this was done to accommodate any large loads like logging trucks.

“All commercial vehicles are licensed through Alberta registries to haul a certain amount of weight, depending on their axle configurations.

“All loads that have been hauled in or out of the site have been legal loads.

“The Town’s consulting engineer is monitoring the road weekly, and if damage to any road does occur, there are items in the contract to repair those spots once construction is finished.”

Mayor Crane said the $7,500 being paid by residents is part of a local improvement levy which allows the Town to impose a tax of 10 per cent of the overall cost debentured over 25 years on residents who are benefiting from a specific project.

The improvements on Windsor were requested by the Town, not by the residents.

“Councils are tasked with keeping the infrastructure and the community in operating shape,” Crane said. “In Turner Valley we have always had a water-main and water-line replacement system in place where we try to complete old sections, at least one a term.

“That keeps us well ahead of our infrastructure deficit... Windsor and Sunset Boulevard are great examples of staying ahead of the game when it comes to aging infrastructure.”

Graham said he also wondered why Sunset residents and businesses aren’t being forced to pay a levy.

Crane said that was in part because the Sunset Boulevard construction came in at approximately $700,000 under budget.

Also complicating the situation is that communities to the south and parts of old town Turner Valley all roll in to Sunset.

“The debate was do we put in a local improvement levy on all of the residents to the south, because without it they wouldn’t be able to have it roll,” Crane said.

“If there are cost over-runs, an improvement levy could be put in place at a later date.”

Crane said a positive note on the construction is the business section of Sunset, which includes the Chuckwagon Café, Eau Claire Distillery and others, should be open by July 21.

“We’re very happy to see that the businesses will get more foot traffic in there,” Crane said.

The Windsor detour will be in place until the project is completed, which will be in mid-September.

Crane said any residents with concerns can email him at mayor@turnervalley.ca