Friends of the Pool Society donates remaining funds before disbanding
Jan 11, 2021 10:45 AM By: Brent Calver/Western Wheel 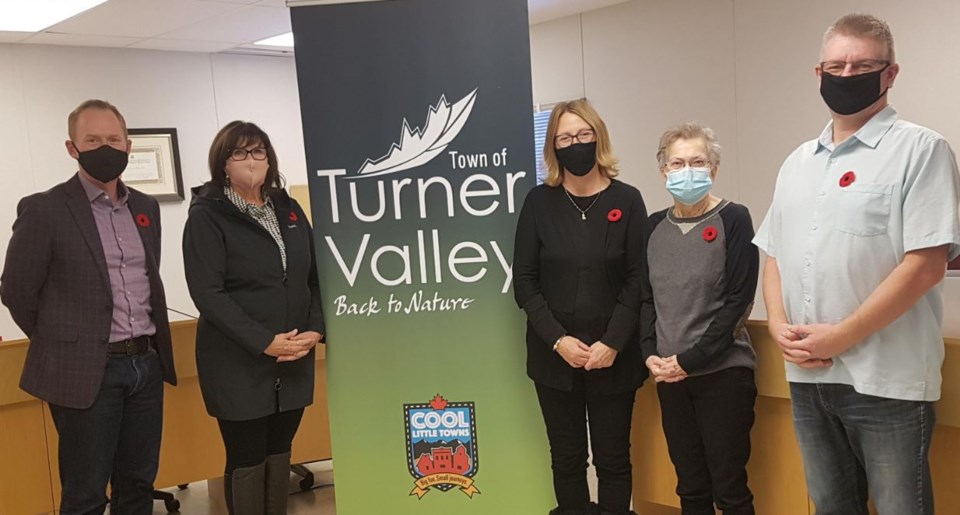 (From left) Todd Sharpe, chief administrative officer of Turner Valley; Friends of the Pool Society members Brenda Thompson, Tracie David, and Barb Savage (missing from photo, Hazel Martin); and Craig Beaton, municipal operations and facilities manager pose for a photo after announcing a donation of $29,000 from the society to the Dr. Lander Memorial Pool.Photo courtesy Town of Turner Valley

The Friends of the Pool Society, a volunteer group with over 20 years of history serving the Dr. Lander Memorial Pool, was thanked during the Turner Valley council meeting on Jan. 4 for its contributions to the community.

Over the two decades, the group fundraised and financed several upgrades and initiatives for the pool and the group has announced it will be disbanding.

Friends of the Pool Society members Brenda Thompson credits the pool with “countless hours of family fun and memory making."

“It has been a part of our community since 1963 and I hope it remains for many years to come," she said. "Our children grew up in Turner Valley, the pool was one of the main attractions to the town.”

She said her children all learned to swim at the pool, with her youngest daughter also training and becoming a junior lifeguard, teaching lessons as a summer job at the Turner Valley landmark.

“My hope is that the outdoor pool and spray park always remains available for children and families in our community,” Thompson said. “It’s an attraction to this area and provides opportunity for fitness, fun, relaxation, and employment for everyone in the community.”

Thompson cited dwindling membership and volunteers for the disbanding of the group, with four members remaining, three of which served on the committee for over 15 years.

She said it is time for others to volunteer and lead, and that the Town’s parks and recreation department is in the process of launching a new group to search out funding for community projects.

Turner Valley CAO Todd Sharpe said in an interview that he considers the pool to be a major draw for the town and that he was grateful to the society for its contribution to it.

“The Dr. Lander Pool is really valuable to the residents, but really, it’s a collector item,” Sharpe said.

“We get people from Black Diamond, from the County, we even have people coming from the south end of Calgary to enjoy the facility. We’re really proud of that — we run a first rate facility.”

He said the group was key to the pool’s growth over the years.

“They just wanted to be involved, predominantly, through fundraising — and that was everything from government grants to bake sales and everything in between,” Sharpe said. “They raised over $60,000, and we put that money to good use."

He said the remaining amount will be used for enhanced amenities around the pool that wouldn’t typically be feasible for the municipal budget, as well as additions that will enhance the experience of the pool.

He said when the Town received the letter informing them of the society disbanding, he invited members to the council meeting, saying while he hadn’t had much involvement with the group in its history, he wanted to recognize the organization for its contribution.

“I wanted to get to know them and just understand the history of it all,” Sharpe said. “I'll tell you, what a group.

Sharpe said he sees facility and people’s involvement in it to be an essential part of binding the community together in trying times.

“Community has never been more important than it is today,” Sharpe said. “As we move forward through this pandemic, recreation is going to be a critical part of the recovery process.

“That sense of community and having a facility to rally around and enjoy together is really important and this group has just made it that much better.”

About the Author: Brent Calver/Western Wheel