Fees and penalties are among ideas suggested by council to address motorists refusing to remove their vehicles from residential areas to allow snow-removal equipment access to roads.
0
Feb 8, 2020 7:00 AM By: Tammy Rollie 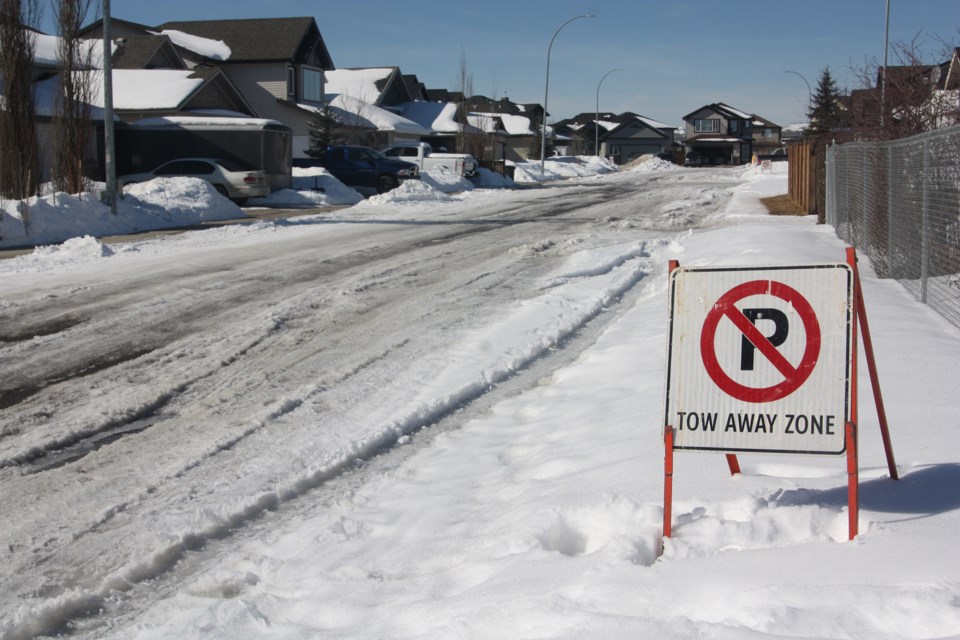 TURNER VALLEY - Turner Valley councillors have tasked administrators to come up with potential solutions to keep parked vehicles off the street during snow removal.

At its Feb. 3 meeting, council directed administration to come up with a solution after expressing concerns that the Town isn’t authorized to tow vehicles or fine motorists failing to remove their vehicles from the street when snow removal equipment is at work.

“Under the current bylaw the Town has no authority or power to tow vehicles or fine people that don’t move during a snow removal event, even though they’ve had a warning,” said Coun. John Waring. “Removing snow, as we know, is a reasonably expensive business.”

Waring said many municipalities have bylaws or policies in place, adding that it assists in getting motorists to comply with requests.

During a discussion about snow removal last month, Mayor Barry Crane said he would like to see the Town have the ability to enforce the removal of abandoned vehicles, or those parked in the same place for several months at a time.

“I know of at least six that sit in the exact same location and haven’t moved in over eight months,” he said. “During snow events they remain there and now they’re encased in ice. Conversations need to be had with the owners.”

Craig Beaton, the Town’s operations and facilities manager, said when motorists don’t move their vehicles it prevents larger equipment from accessing the area, particularly when vehicles are parked on both sides.

“The primary reason for snow removal is so traffic can move, unhindered, safely,” he said. “If we miss a few spots it’s not the end of the world, but the challenge is getting those vehicles out of the way so that we aren’t slowed down and we can just keep on moving without mobilizing the equipment to another street.”

Beaton said it’s difficult to estimate how much parked vehicles cost the town in delays, but he said crews see a dozen or more on streets despite adequate signage prohibiting parking.

“The second side to this is, because residents refuse to move their vehicles or are unable for whatever reason, we will not come back to clean that spot,” he said. “It’s time consuming and it’s expensive.”

As well as tackling parked vehicles during snow removal, Beaton said the departments will also address street cleaning, although it’s not as much of an issue.

“With street cleaning, our main priority is gutter control,” he said. “We’re trying to sweep all the gravel out of the gutters. When there’s vehicles parked there we can’t clean those portions.”

Beaton said some municipalities require that vehicles be off streets for 72 hours in residential areas after a major snow event.

“Vehicles are not allowed to park in certain snow routes or snow zones so equipment can come through unhindered,” he said. “If we had a policy that stated all residential vehicles must be off the streets for 72 hours after a major snow event that gives us access.”

Beaton said it could be a challenge as not all Turner Valley homes have driveways or parking at the back of their lots.

“There’s no one solution that’s going to resolve all of the issues,” he said. “It would be beneficial for us to collectively put our heads together and do our best to figure out what would be the best solution and make our process more efficient and better for residents.”

“This, to me, makes sense for use of people’s time and our Town resources,” he said. “At the end of the day, I want to see this happen if we’re going to be moving snow. Let’s make this as efficient as we can.”