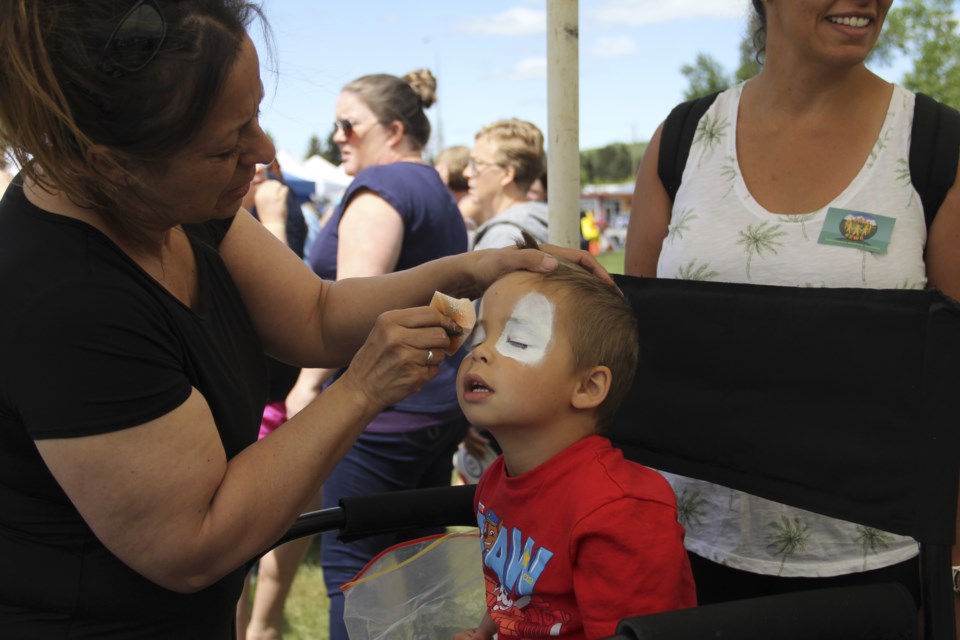 Hunter Fitzgerald, 3, gets transformed into Spiderman by face-painter Darlene Decoste at Turner Valley Discovery Day in 2018. The event is on hold for 2021. (Wheel file photo)

“We are hopeful that our events can take place sometime over the summer months, but the reality is at the moment those things are being delayed,” said Monique LeBlanc, Manager of Community Services and Economic Development, at Turner Valley council’s April 19 meeting. “So, we really don’t have the Province’s permission as a result of the COVID-19 health orders to host those.”

As a result, Turner Valley’s Discovery Day, scheduled for early June, has been put on hold.

“I am very reluctant to say it is cancelled,” LeBlanc said. “This year, I am feeling by mid-June, even earlier we should have some clear indication… at that point I think we get some public input to see what we can do… I am very optimistic that something can be held (at a later date)."

LeBlanc told council the event typically takes about six weeks of planning. As well, the Town has not pursued sponsorships for Discovery Day - between $5,000 to $10,000 typically needs to be generated for the event.

“We also recruit between 40 and 50 volunteers that are required,” LeBlanc said. “If this has to be thrown together in short order, that is something that I am working on.

Deputy Mayor Jamie Wilkie urged that events like Discovery Day continue as much as possible, and he is looking forward to working with the public for a solution.

“I would love if we could explore some options that can be done on a hair-trigger basis – on fairly short-notice,” Wilkie said. “One of the things we noticed last year is cases dropped off in the summer and there was some kind of opening near the end of it.

“I would like to hope that we would see something similar this year and vaccines hopefully give us some more cause for hope.”

“I wonder if we should not look at setting an alternate date for Discovery Day in July, August, September instead,” Holladay said.

LeBlanc agreed with the suggestion.

“If we could set a date for July or August, at least it would be a date we could work back from,” she said.

She said if an event does proceed, she would like to invite Black Diamond to participate to make it a multiple community event. LeBlanc will present tentative dates at a future meeting.

The revived Diamond Valley Triathlon, tentatively scheduled for Canada Day, has stumbled out of the starting gate due in part to not providing enough notice to a major oil and gas company which owns the land Millennium Park sits on.

Coun. Lana Hamilton urged that a letter be sent to ConocoPhillips asking for an amendment to the four-month prior notice needed to hold an event at the park, adding the oil and gas company has been good corporate citizens in the past.

“It seems very stringent that something like Diamond Valley Triathlon would require four months' notice to be able (to hold)  a community gathering,” she said. “Millennium Park is really the heart of Turner Valley and Conoco has always allowed its use for community events.”

She said the four-month notice is a deterrent for organizing events and as a result will impact tourism and businesses.

LeBlanc said the original contract with ConocoPhillips stated the only events for the park would be Discovery Day and New Year’s Eve.

The Millennium Park lease agreement between the Town of Turner Valley and ConocoPhillips, owner of the property, requires written consent prior to any event held, including Discovery Day and New Year’s Eve.

Each request must be submitted at least 90 days prior to the proposed event, how- ever, an additional 30 days is required by the Town to process the application. At this time, third party event applications are not being considered due to public health restrictions.

“We are trying our best to improve the business climate and make our town open for business and here we are having to wait four or five months just to hear if we can have a little event on Millenniam Park,” he said. “That’s not good for business.”

A motion to send a letter to ConocoPhillips concerning the issue was passed by council.