Backcountry trail rides may be a popular southern Alberta attraction, but a national historic site south of Longview does things a little differently when getting its visitors into the saddle.
0
Jul 30, 2014 12:00 AM By: Tammy Rollie 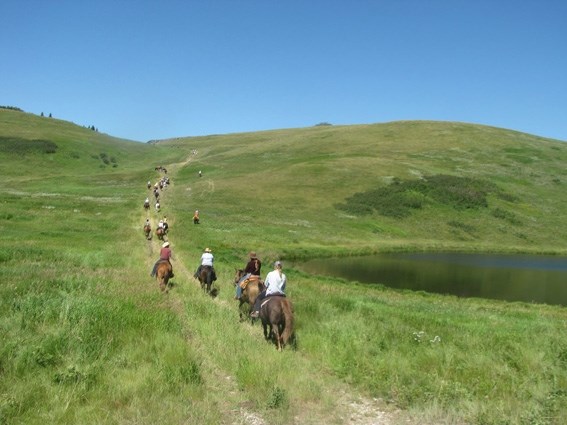 The Bar U Ranch Trail Ride, as seen here in 2012, is a great opportunity learn about the history of grazing lands, the types of grasses in the area south of Longview, and wildlife that inhabit the region.

Backcountry trail rides may be a popular southern Alberta attraction, but a national historic site south of Longview does things a little differently when getting its visitors into the saddle.

Rather than following a well-worn path traveled by thousands before them, participants in the Friends of the Bar U Ranch Association’s annual day ride head out into original Bar U Ranch grazing lands and learn about the history of the land.

On Aug. 2 participants will ride out to the Spruce Ranch southwest of the Bar U Ranch and back.

“It’s a chance for people to access lands, in many cases formerly Bar U grazing lands, that they wouldn’t be able to access otherwise,” said Mike McLean, Bar U Ranch acting site manager. “It’s a chance for people to get out and see some of these wonderful grazing lands that have been such a boon to our cattle industry. That’s something people don’t get a chance to do much of anymore.”

The Bar U trail ride gets people young and old riding horses in the wide-open spaces of the foothills, said McLean.

“It’s a mix – ones that trail ride and some ranchers like to come out to this as well,” he said. “They come from all around the region here.”

Longview rancher Brian Garstin has been the director of the trail ride the last four years and joins the event with his family every year as one of the outside wranglers.

“I wrangle up some neighbours around here that are experienced to help us out if we have any problems,” he said. “I ranch myself so I’m used to the country. It’s somewhat of a day off.”

In addition to participants riding their own horses, the Bar U Ranch supplies its horse-drawn wagon that transports visitors daily up and down the hill at the historic ranch site south of Longview. Those commonly riding in the wagon are the elderly, young children or anyone who is unable to ride or supply their own horses.

Garstin said there are usually more than a dozen people who ride in the wagon during the approximately two-hour trail ride and another 50 to 60 on horses.

“We get inexperienced riders sometimes, like youngsters, who want to experience it too,” he said. “It’s in an area that it’s not too rough of terrain. That country is untouched back there and it’s nice to see it that way.”

The trail ride gives participants a great view of the rolling green hills and many times wildlife, said Garstin.

“Depending on the terrain you are going to see quite a few deer or the odd moose if you’re around wetlands or water,” he said. “We usually have a few cowboys along that know the history of the area and tell tales.”

Garstin said they’ve even had cowboy poets join them in past years and share some poetry and history of ranching life.

In some cases, ranchers will stop and talk to riders about the landscape or the different type of grasses that grow in the region, he said.

“I think they appreciate seeing where the cattle are raised and the scenic aspect of it – the happy hour of the cows out there in the hills,” he said. “It’s a day out. It’s a different outing for people.”

The trail taken varies each year, Garstin said. Two years ago riders headed north of the Bar U Ranch, while this year’s ride is taking them south. Last year’s event was cancelled due to wet weather, he said.

“We can’t go too far because we like to have it on the original Bar U land when it was a big ranch,” he said. “You’ve got to get permission from land owners and most people are pretty good. It’s really nice to have the ranching neighbours be cooperative. They usually come along and tell some stories if they own the land themselves.”

The Bar U Ranch provides participants with sandwiches and refreshments during the trail ride.