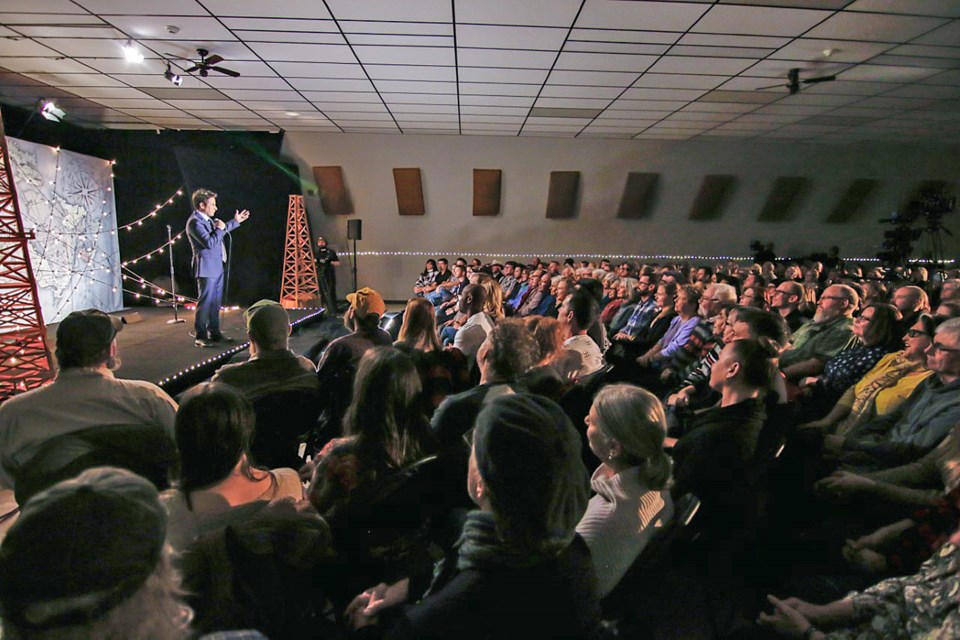 Jonny Harris and his production team with CBC Gem spent Nov. 18 to 23 talking with local residents and business owners, learning about the history and capturing the picturesque town on film as they prepare a 45-minute episode for the television series Still Standing, which will air in about a year. The show takes viewers to small Canadian towns that have overcome adversity.

Logan Tymstra, a third generation Turner Valley resident, was hired by the crew to show them around.

“They wanted to know the best spots to film the mountains, where things are in the town like where’s a good spot to go for coffee...” he said. “I was with them every day from Monday to Saturday. I was just part of the crew.”

This was Tymstra’s first experience with television.

“It was cool to see how it all worked and how much camera gear it takes to put on a TV show like that,” he said. “They had a U-Haul truck full of it.”

On one occasion, Tymstra assisted with filming.

“The first day I had to help one of the camera guys cover up their cameras because it was snowing really hard,” he said. “Everybody that worked there was really nice and made me feel like a part of the team right away.”

Executive producer Anne Francis said the crew interviewed six people for the episode, including a Turner Valley Gas Plant tour guide who spoke about growing up in Turner Valley and the closure of the gas plant, and various entrepreneurs like Eau Claire Distillery owner David Farran, who spoke about the challenges of building a business in an industrial town that’s being reclaimed decades later.

“We loved Turner Valley, it’s beautiful and the people were lovely and warm and welcoming,” she said. “Turner Valley showed us a really good time. It’s going to be an awesome episode.”

With natural resources having been an initial economic driver in many Canadian communities, Francis said the show features those that no longer rely on those resources, like logging or mining, yet still stand despite those losses.

“Every place has a story and we haven’t done a lot on oil and gas,” she said. “The overall theme for Turner Valley is reinvention, staying power, redefining who you are and how to keep your community together. We tell the story of the people.”

While the stories are different in each community, Francis said the welcome is always warm.

“As the show goes on in seasons - we’re wrapping up our sixth season - the warmth that we receive when we come into towns is really moving,” she said. “It really leaves a lasting impression on Jonny and also the crew. When we go to towns like Turner Valley it really reinforces why we do what we do.”

While the crew had a tight schedule, they had a chance to relax during a jam night at the Woodstock Hotel on Nov. 21.

In attendance was Mayor Barry Crane, who showed them around Turner Valley previous to filming.

“I went to the Woodstock event and I did a quick handshake with Jonny and maybe 30 minutes of visiting,” he said. “Having CBC and the Still Standing crew here was just great for the town. We had beautiful weather and the cinematography was fantastic.”

The highlight was Harris’ free first-come first-seated comedy act Nov. 23 at 7 p.m. in the Flare ‘n’ Derrick Community Hall, with people lining up as early at 3 p.m. for a seat, said Crane.

Harris wrote the set based on the previous five days spent in Turner Valley.

The show was at full capacity with 300 people, plus an overflow of another 150 at the Sheep River Library where the show was televised, Crane said.

“It was absolutely hilarious from start to finish,” he said of Harris and the other two warm-up comedians. “They did a fantastic job of recognizing the past as well as the present. Their ability to hone in on the local flavour of our community through the eyes of our entrepreneurs was excellent.
“It was a weaving of comedy through history and events.”

Crane said Still Standing has been the talk of the town, and he was happy to see so many people show up for the comedy act and recognize what a great contribution Still Standing is for Turner Valley’s tourism and entrepreneurs.

Having a filming crew in Turner Valley, featuring the town’s unique history, is something Tymstra will never forget.

“It was cool because they were doing research on my town and I was learning new things about my own town - lots of history about oil and gas mainly,” he said. “They did lots of in-depth research on the history of it. I think it will likely help lots of our local businesses just because they interviewed a ton of them and we have lots of good entrepreneurs here.”

Harris and the production team are currently filming in Lillooet, British Columbia.