Turner Valley has been getting a lot of attention as more people made the community their home this year.
0
Oct 29, 2014 12:00 AM By: Tammy Rollie 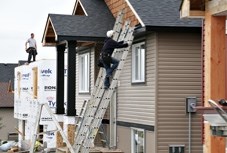 An increase in the number of homes built in Turner Valley has Town staff expecting the trend to continue in 2015.

Turner Valley has been getting a lot of attention as more people made the community their home this year.

Recent statistics collected by the Town of Turner Valley reveal 41 new homes were constructed in existing subdivisions in the community of about 2,200 this year, almost doubling last year’s 21 new homes, two months before the end of 2014.

“It looks as though we’re heading into a banner year,” said Barry Williamson, the Town’s chief administrative officer. “We are pretty excited with this sort of increase.”

Williamson said the number of new homes in 2012 totaled 19, also up from eight in 2011. He attributes this year’s increase to the area’s booming housing economy.

“Just look at what’s going on with our neighbours in Calgary and the spillover to Okotoks,” he said. “There is a demand increase in this region. Articles about Canmore and Airdrie say they’re hitting record numbers.”

Williamson suspects homeowners are attracted to Turner Valley’s more affordable housing, compared to its much larger neighbour to the north.

“A $100,000 savings on a house amounts to a lot,” he said. “For younger families to come there’s got to be affordability. There’s got to be mixed housing to allow for some of that. I think all communities are going to be facing that as to how do you retain the younger people so they are going to stay here.”

If the trend continues, William expects the current available housing will be taken up by the end of next year.

“It looks like there is at least another 50 or more lots available on existing developments so if we end the year at close to 50, then we’ve got a similar availability next year,” he said. “It’s going to thin out what’s left unless we have more developers coming in next year.”

Williamson said the increase in population in Turner Valley will likely prompt more development in the coming months.

“That’s a positive for developers looking for areas surrounding Calgary or Okotoks,” he said.

To get a better idea of the demographics that make up Turner Valley, Williamson said a census will be taken in 2015.

Turner Valley Mayor Kelly Tuck finds the interest in the community is simply the friendly people and beautiful landscape, and is excited to see more individuals and families choose Turner Valley as their home.

“It’s impressive for a community of our size,” she said. “The last time the town of Turner Valley had seen this was in 2007. There is definitely a switch. I see a huge shift.”

She added a lot of people also moved from Calgary, including several families with young children.

“I’ve seen an influx of younger families coming to this community, which I think is just great for the area,” she said.

Holladay said the elementary school of just under 200 students experienced an enrollment increase of 26 students this year over last, resulted in the school adding two more staff members this year.