Diamond Valley-area homeowners wanting continued access to an organic waste site close to home might have to dig into their pockets to keep it operating. Black Diamond town council agreed at its regular meeting on Feb.
0
Feb 11, 2015 12:00 AM By: Tammy Rollie 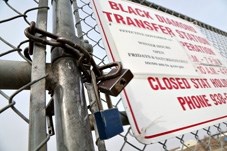 Keeping the Black Diamond Transfer Station open may require users to pay a fee, according to a discussion among the Town&#8217; s council last week.

Diamond Valley-area homeowners wanting continued access to an organic waste site close to home might have to dig into their pockets to keep it operating.

Black Diamond town council agreed at its regular meeting on Feb. 4 to contribute no more than $20,000 from reserve funds toward much-needed repairs to the transfer station near Black Diamond and to look into having a user-pay system. The station provides an accessible place for area residents to drop off organic yard waste and additional bagged garbage.

“I’m in favour of user-pay,” said Mayor Sharlene Brown at the meeting. “I think the user-pay would be minimal.”

Council’s decision follows the MD of Foothills’ request that the Towns of Black Diamond and Turner Valley help foot the $50,000 bill to provide an office for the station worker, concrete pads to prevent trucks from sinking in the ground and repairs to collapsing sidewalls.

It cost the MD, which owns the station, more than $13,000 to operate the site last year.

An online survey was posted on the Black Diamond and Turner Valley’s websites for about two weeks last month to determine who is using the facility and for what purposes.

Most who commented saw the site as a much-needed asset in the community while some didn’t know it existed, some felt its hours of operation are too limiting and others felt taxpayers’ money could be better spent. Of the 107 people who responded to the survey, 78 reside in Black Diamond, 25 in Turner Valley and four are from the MD.

A regular user of the site, Coun. Jackie Stickel said it’s a great service for the community and the Town should commit some money, but that she wants assurance from the MD that it’s going to remain a service for a minimum of five years.

“It’s got to stay there for a period of time,” she said.

Coun. Judy Thomson said while she agrees with the user-pay option, she’s worried how residents will respond.

“They are going to see a hike in their water and sewer rates, they don’t know the taxes yet and then this,” she said. “I don’t know what else we can do.”

Coun. Ruth Goodwin agrees with the pay-as-you -go idea, adding the service is important to a small group of people, according to the survey, and the Town should continue to offer it.

Coun. Michel Jackson said he’s concerned if the MD closes the transfer site the materials could end up in the landfill, while Brown said she’s concerned they could be dumped on the side of the road.

While it is going to cost the town initially, Coun. Jim Deacon said it would be smart to enter into an agreement with the MD to keep it open.

“The MD is looking for a partnership… and I think we would be foolish if we didn’t look at it,” he said.

The 20-year-old transfer station collects about 100 tons of leaves, branches and grass clippings a year, and about 30 tons of garbage that is transported to the Foothills Regional Landfill.

If the MD decides to keep the transfer station open, the Town of Black Diamond’s contribution will come from the parks and recreation capital reserve and solid waste capital reserve funds, Brown said.