A Turner Valley man no longer sees retirement in his near future as he rebuilds what he lost in last year’s flood.
Jun 18, 2014 12:00 AM By: Tammy Rollie 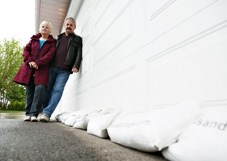 Black Diamond residents Ruth and Gary Reid expect to pay more than $70,000 for repairs to their home, which was damaged in the 2013 flood.

A Turner Valley man no longer sees retirement in his near future as he rebuilds what he lost in last year’s flood.

Gary Reid and wife Ruth spent the last 12 months renovating three levels of their four-level-split home on First Avenue due to severe damage caused after the Sheep River flowed through their neighbourhood on June 20, 2013, leaving them with a bill exceeding $70,000. Their home was among dozens damaged in their community following the flood that hit southern Alberta.

“I was going to retire in a couple of years, but now it’s going to be longer,” said Reid. “We had to do a lot more than we expected.”

Although his family received assistance from the Province and their insurance company, Reid said he’s been paying tens of thousands of dollars out of his pocket.

“I called the government almost every day,” said Reid. “I’m like a dog with a bone. I won’t give up.”

Reid renovated his home according to the flood protection standards set by the Province for homeowners residing in flood fringe areas. Repairs included replacing studs with metal studs coated with a waterproof substance, insulation with a high-density spray foam and drywall with waterproof boards.

The Reids also built a three-foot tall cinderblock base in their yard as a protection barrier.

“You have to have it back right in order to have help,” he said. “We’ve gone beyond that. If something happens again I know we have that help to draw on.”

Although the family worked hard to rebuild their home, Reid said so much was lost that they will never get back.

“It’s the stuff that we lost that we can’t replace,” he said. “That’s what’s frustrating and hurtful.”

Her business was not damaged, but Leong said she lost customers who will likely never return.

When the Decalta Bridge in Turner Valley and Highway 22 west of Black Diamond were washed out, transportation was cut off between the two towns for three weeks, resulting in a huge loss of business for Black Diamond merchants.

Leong said many of her Turner Valley customers didn’t return.

“We had a tremendous number of Turner Valley residents who are dedicated customers,” she said. “We will probably never get a lot of those customers back.

Black Diamond Mayor Sharlene Brown estimates up to 65 per cent of business was lost six months following the flood. With the Black Diamond Lions Club Campground closed last summer due to severe damage from the flood, the community did not experience the level of tourism typical in a season, she said.

A year later, Brown said things are starting to bounce back. During the Black Diamond Parade this month Brown saw the largest crowd in years.

“It’s been a very long time since I’ve seen that amount of people shopping in the community,” she said. “It’s great to see this tourist season is starting off with a boom.”

She said new businesses opened, the Town developed a tourism website and the Province is providing funding to enhance the Cool Little Towns initiative to attract tourists.

“Our economic development coordinator is working tirelessly to be able to promote and sustain what we’ve got for existing businesses,” she said.

Residents continue to remain on water restrictions since the Black Diamond’s water treatment plant was washed away in the flood, causing the town to rely on Turner Valley for its water source.

With most of Turner Valley’s water wells wiped out in the flood, work is underway to find adequate sources to supply both communities with water.

Some river mitigation work has been completed and more is underway.

Brown said the strengthening of the Highway 22 bridge abutments and construction of a dyke parallel to the campground are complete and work will soon begin on a dyke at the north end of the town. A temporary barrier is being built on the riverbank at that location.

Flood protection work does not end there. Brown said mitigation work will need to be done up and downstream of Black Diamond, and the town will be in communication with the MD of Foothills and Alberta Transportation regarding the potential need to lengthen the Highway 22 bridge to accommodate the widening of the river caused by last year’s flood.