The Town of Turner Valley may be spending thousands of dollars in renewable energy initiatives this year to save taxpayers more money in the long run.
0
Jul 16, 2014 12:00 AM By: Tammy Rollie 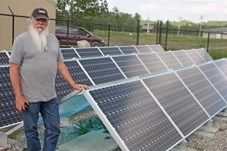 Dusty Williams, Town of Turner Valley environmental services and recycle supervisor, stands beside the solar array system near the Town&#8217; s water treatment plant last week. Williams is awaiting budget approval for the installation of a communication system for the solar array.

The Town of Turner Valley may be spending thousands of dollars in renewable energy initiatives this year to save taxpayers more money in the long run.

Dusty Williams, the Town’s environmental services and recycle supervisor, said a number of projects are in the works in an effort to cut energy costs produced by the town’s facilities and eventually make them self-sufficient.

“Black Diamond and Turner Valley are ahead of the game on some of this stuff,” said Williams. “The goal is to have a community that is completely as self-sufficient as possible, otherwise we’re going to run into problems with massive power grids and pricing.”

Awaiting budget approval is the installation of a $1,000 communication system for the water treatment plant’s 27 solar panels installed south of the plant two years ago.

Williams said the communication system will allow staff to not only monitor production remotely via the Internet, but also identify any problems in production. He said the system will give warnings in the event of voltage drops, allowing staff to address the problems immediately, potentially saving money in the event a problem is caught early and fixed before major damage occurs.

The solar panels at the water treatment plant produced 11.68 megawatts of power in two years, enough to power 533 homes for a day and eliminate 8.3 metric tons of greenhouse gases, Williams said.

Already approved is the $40,000 installation of six solar panels on the town shop awning, which, together with the existing system consisting of six panels, should generate enough energy to offset power costs in the building, said Williams.

Previous energy-reduction efforts in the building include the installation of T5 Florescent LED lights and in-floor heating. The facility is used to maintain town vehicles.

“The key there is from the day you turn the switch on it starts saving you money,” he said. “The savings are in the energy you are not using because it’s being augmented. If we are running this facility at net zero we will be saving that energy full cost power production for the year.”

Williams is also awaiting Town approval to install an Energy Management Information System at the Sheep River Library and town shop to provide online communication for all energy functions in the two buildings.

The system, at a price tag of almost $5,000, will have the capability to encompass more facilities in the future up to a 22 kilometre range, Williams said. That means any problems that arise with any systems in those buildings can be dealt with remotely, he said.

“If we monitor this stuff the savings can be exponential,” he said. “We can narrow down problems to each device or light bulb fixture.

The payback is usually a year or two years.”

The installation of the system at the library would assist in bringing the facility to a gold level in the Leadership in Energy and Environmental Design certification, Williams said. It is currently at silver certification.

Williams is also waiting for verification for a $25,000 grant from the Municipal Climate Change Action Centre, with the plan to have the Town contribute the same amount to install energy-efficient LED indoor and outdoor lighting at the water treatment plant, pay for an energy audit to determine where energy is being used and outline improvement areas and install variable frequency drives to save energy production on the three remaining water pump motors in the plant. Williams said the latter will result in a 30 to 40 per cent energy savings.

When the Water Treatment Plant is handed over for operation by the Sheep River Regional Utility Corporation as a shared water source between Black Diamond, Turner Valley, MD of Foothills and eventually Longview, Williams said it will receive a facility that is fully updated and energy-efficient.