Eva Levesque is opening her Longview home to the public with two hour-long matinees Sept. 19 and 20 at 2 p.m., marking the first time the band has performed for a live audience since last fall’s Okotoks Food Bank Christmas Concert.
Sep 9, 2020 5:30 PM By: Tammy Rollie 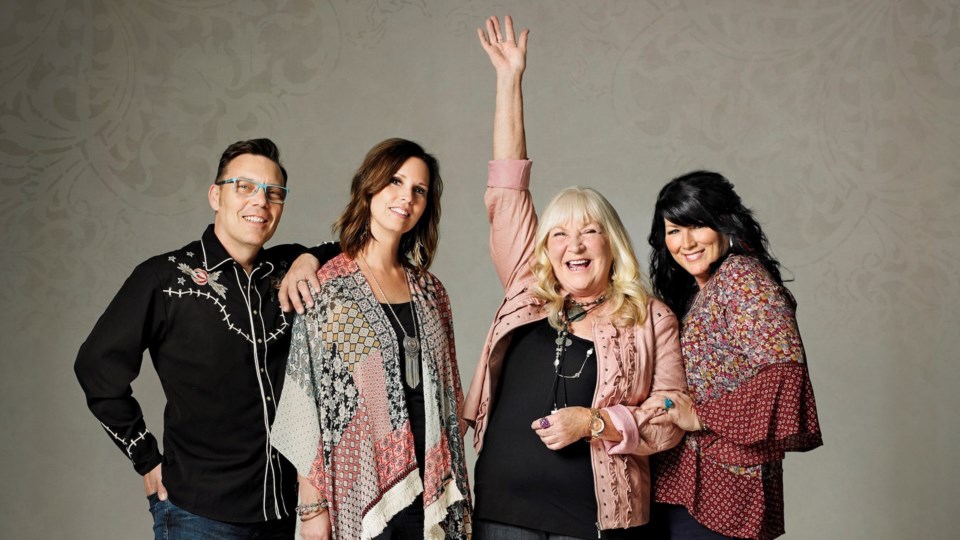 A Longview singer/songwriter is inviting fans to her backyard this month as her award-winning folk/country band prepares to perform its first concert in nine months.

The Travelling Mabels’ matriarch Eva Levesque is opening her Longview home to the public with two hour-long matinees Sept. 19 and 20 at 2 p.m., marking the first time the band has performed for a live audience since last fall’s Okotoks Food Bank Christmas Concert.

“We haven’t sang in front of an audience for a long time,” said Levesque. “We had a bunch of shows ready to go in March and April and they all got cancelled. The last show was at Christmastime.”

The COVID-19 pandemic caused the cancellation of thousands of concerts across Alberta, resulting in many bands performing online and using the spare time to create new material.

While in limbo, the Mabels performed for Canadian actor and singer Tom Jackson’s Almighty Voices, a weekly digital variety series that ran from April to June featuring numerous Canadian artists to raise money for the Unison Benevolent Fund, a non-profit charity providing counselling and emergency relief services to the Canadian music community.

Levesque said while the Mabels maintained some online presence the past six months, the band is chomping at the bit to get on stage full time.

“When you’ve lost all your gigs your income is gone,” she said. “We did a couple of videos on our own just to keep our name out there, but we need to do this full time. This is our job.”

Since deciding to host a backyard concert for fans, word has been getting out on social media, Levesque said.

“The phone has been ringing off the hook and I haven’t even hung any posters yet,” she said. “People are really interested in hearing live music again.”

Levesque said the feeling is mutual. The Travelling Mabels are as eager to perform as their fans are to see them on stage.

“This concert is for the people and for us, too, because we sure miss our audience, we sure miss playing in front of people,” she said. “All of the shows we had, even into the fall, have been cancelled. Even our Christmas show that was booked in early December got cancelled.”

Levesque is opening her yard to up to spectators with adequate space to physically distance and is asking attendees to bring their own chairs and beverages. Portable toilets will be on site.

“I’ve got a big tent and we’ve got a stage – it’s going to be fun,” she said. “We can put 60 people out in our yard very easily and keep them socially distanced.”

The Mabels will perform a range of songs from their three albums, as well as a variety of cover tunes. Levesque’s husband, country musician Cody Follis, will open the show.

“We are going to bring in some old stuff that we haven’t done in a long time like Time Drags On, which Lana Floen wrote,” she said. “We haven’t done that for I don’t know how many shows and I love that song.”

Although the Mabels have been busy writing new material for their next album, Levesque said the songs are still in the beginning stages and not quite audience ready.

“We are far from having it ready yet,” she said. “We haven’t been able to perfect them well enough to play them but we’ve got some good material coming up.”

The album will be heavily influenced by the band’s newest member Therry Lawson, of Sundre, Levesque said.

“She’s got a whole different feel – she’s kind of bluesy and the music has a good groove to it,” she said. “Therry is a good harmonizer and bass player and she’s a damn good mix with us. She’s had a lot of stage experience.”

Levesque said the COVID-19 pandemic has been a challenging time for the band, and she's eager to get back on the road when it's all over.

“We’re not rehearsing as much as we should because we don’t have any shows,” she said. “We’ve done a lot of touring into an awful lot of little halls and communities the last 12 years. Hopefully we’ll get back there someday.”

Tickets to see The Travelling Mabels’ backyard concert cost $25 and can be purchased by calling Eva Levesque at 403-558-3967.