The possibility of a major food chain moving into Black Diamond isn’t a big concern to Black Diamond merchants, many of whom are independent business owners, according to a Town survey.
0
Jul 9, 2014 12:00 AM By: Tammy Rollie 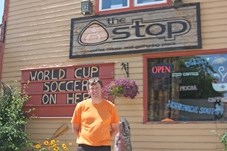 Mike Kingston, owner of The Stop Coffee House &#038; Gathering Place, is not worried about the possibility of a Tim Horton&#8217; s opening in Black Diamond, but would like to see the town first develop an economic plan.

The possibility of a major food chain moving into Black Diamond isn’t a big concern to Black Diamond merchants, many of whom are independent business owners, according to a Town survey.

A survey distributed to merchants by the Town of Black Diamond’s Economic Development Committee reveals 59 per cent of business owners aren’t concerned about chain retailers coming to town, while 61 per cent aren’t concerned with allowing drive-thrus in the community (nine per cent were undecided for both). The survey was distributed to 160 businesses last spring with 54 participating.

“I just thought they would be more concerned about a potential competitor, but they weren’t,” said Petrovich, the Town’s Economic Development and Events Coordinator.

The survey follows Town council’s decision on Feb. 5 to change land use rules to allow retail service, but not a drive thru, on a site at the intersection of Highway 7 and 3 St. NE where a developer stated interested in building a Tim Horton’s restaurant.

At a public hearing the same day, several people expressed concerns about the potential for increased emissions from idling vehicles and the impact a chain restaurant could have on the town’s independent businesses.

Petrovich said council’s decision prompted concerns that the Town is restricting certain businesses. As a result, the survey was developed to get feedback from Black Diamond merchants on the issue.

Among those surveyed was Mike Kingston, owner of The Stop Coffee House & Gathering Place, who said it’s not so much a matter of whether or not the town should allow a Tim Horton’s, but that the town should update its economic plan.

“We have a plan for the downtown core with the Main Street Program and that worked out,” he said. “The success of Black Diamond right now is because that was done, but we are at that crossroads now where it’s the next level.”

With chain restaurants showing an interest in the community, Kingston said it’s important a plan be developed before these types of decisions are made.

“If those businesses fit into the economic vision and plan of Black Diamond and that’s presented to the different businesses and residents of the community then so be it,” he said. “We have to be careful about picking and choosing (which businesses come).”

Black Diamond Bakery and Coffee Shop owner George Nielsen, who also took the survey, said the addition of a Tim Horton’s in Black Diamond would be detrimental to his bakery.

“I can’t compete,” he said. “I would definitely have to lay people off.”

“Bringing in these big development stores is going to ruin the whole town,” he said.

“The few people they are going to hire up there it’s not going to make up what’s going to be lost in downtown.”

Among the references made during council’s discussion on Feb. 5 regarding idling vehicles was a health and wellness concept created by the Economic Development Committee for the Town’s strategic plan.

“It was not meant to prevent something like this drive-thru coming into town,” said Petrovich, the Economic Development Committee advisor. “When we started the concept we were only throwing it out there to see what kind of feedback we get before establishing the strategic plan.”

In addition to 11 doctors in Black Diamond, the town has health professionals in dentistry, chiropractic, Chinese Medicine and massage therapy, as well as a regional hospital, he said.

The health and wellness concept was also addressed in last spring’s survey.

The survey results were presented to council as information at its June 18 meeting.

“It’s really important that we get a feel for the business community, where they see themselves as far as the upcoming development of the town,” she said. “It’s not always just looking at new businesses coming in, which is important and we need to do because we are a growing community, the other piece is how do we maintain the businesses we already have.”

Brown said the survey is an opportunity to get feedback from all local businesses, rather than just those able to attend the public hearing on Feb. 5.

“Council wanted to see what the comfort level of our current businesses are,” she said. “As a town are we doing the right things to be able to enhance and ensure that our downtown business core is successful and are we providing those opportunities as a town. Everything has the opportunity to come back and be looked at.”