Lagging membership and unsuccessful fundraising is giving a foothills SPCA a run for its money this year.
0
Aug 27, 2014 12:00 AM By: Tammy Rollie 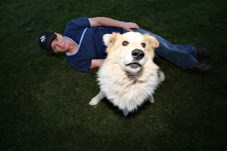 Lagging membership and unsuccessful fundraising is giving a foothills SPCA a run for its money this year.

With only five active members keeping the High Country SPCA alive and its most recent fundraiser poorly attended, Susi John, the organization’s first vice-president, is worried about the future of the non-profit organization.

John was surprised at the low attendance of Dog Days in June and said the cost for insurance, advertising and facility rental resulted in a break-even, compared to raising about $3,000 last year. She said there was no grant money available for the event for the first time.

“The turnout wasn’t as good as we thought,” she said. “I’m not sure if we are going to continue with the Dog Days in the future if it ends up costing us money.”

To add to their problems, the members learned two acres of land near the Sheep River in Black Diamond donated by Longview resident Campbell Wilkinson as a site for a shelter for rescued animals is in the river’s flood plane and can’t be built on.

“The land is in the flood planes,” said John. “We didn’t know that when the land was donated a year and a half ago.”

In the current situation, John questions if the organization could even afford to operate a facility.

“We don’t have the manpower to run a facility,” she said. “We are good where we are right now. We have good kennel space.”

“As far as having a building any time soon, I don’t think that’s even possible,” she said. “We don’t even have a building in Okotoks. It’s too much money. Turner Valley is way too small right now to expect that kind of thing from the people out there.”

Blais, who lives in Okotoks, said it’s been a challenge working in an organization with only five active volunteers. The organization doesn’t even have the manpower to keep its website active.

“It’s been between four and six of us that have done all this,” she said. “It’s not really happening for us.”

Despite the lack of help, Blais refuses to give up.

“I’m going to keep doing as much as I can to help,” she said. “I’m happy to help. Animals are my passion.”

In the meantime, the High Country SPCA continues to operate out of the Diamond Valley Veterinary Clinic, which provides kennels to hold strays until a foster or permanent home is found, as well as veterinary services, at very little cost.

The group is also working with other rescue groups including DINO (Dogs in Need Organization) Rescue in Calgary and Heaven Can Wait.

John said they still have an emergency fund in place to help offset costs for pet owners who can’t afford veterinary care and to provide care for homeless animals including surgeries, vaccinations and spaying and neutering.

“Sometimes we get three or four in a week, sometimes we don’t get any,” she said. “It depends.”

John said they have about one case a month where a foothills resident can’t afford care for their animals, but their most common demand is providing care and finding a home for stray animals.

“The need is increasing,” she said. “It’s getting bigger since last year by about 20 per cent.”

John said 20 active volunteers would be ideal to meet the needs of the SPCA. She said volunteers and members are needed to provide foster homes, transfer animals and to assist with fundraisers.

She said the veterinary needs are being taken care of through fundraising and the help of the clinic’s veterinarian Wayne Steiger, who supplements veterinary care costs for strays and owners who can’t otherwise afford it.

“There will always be a certain percentage of the population that has animals they can’t afford,” he said. “Traditionally people grow up thinking it’s a God-given right to have an animal and don’t realize animals are expensive. They get used to medical bills being covered by government insurance and you get an animal and it’s not.”

Steiger said while many residents can cover routine costs like vaccinations, it’s the emergencies that put them in a bind.

The High Country SPCA can be found on Facebook. To become a volunteer call the Diamond Valley Veterinary Clinic at 403-933-4397.