A Black Diamond woman was the talk of the town when word got around that she reached a milestone few can boast about.
Jul 23, 2014 12:00 AM By: Tammy Rollie 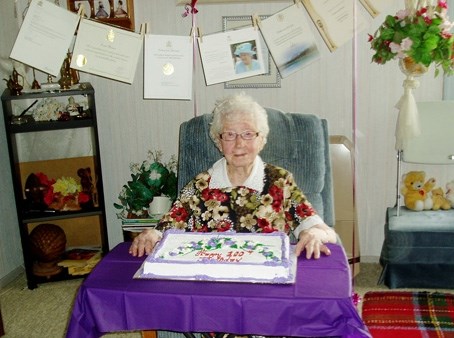 Long-time Black Diamond resident Erma Brown celebrated her 100th birthday with friends, family and other community members at her home on July 17.

A Black Diamond woman was the talk of the town when word got around that she reached a milestone few can boast about.

Erma Brown’s downtown bungalow was filled with friends, family and town officials on July 17 wishing her a happy 100th birthday while many wondered her secret to a long and happy life.

Brown has a few things she attributes to living long - she never smoked a day in her life, her faith in God and a strong family unit that includes two brothers, two children, five grandchildren, nine great grandchildren and a one-year-old great, great grandson.

“Our family is very close,” she said. “If I didn’t have my family I wouldn’t have anything to live for, would I? I keep in touch with all my family and friends on the computer. That email is a treasure to me because I can get in touch with my people because my hearing has been very bad for quite some time and talking on the telephone is not a solution.”

Brown also attributes her long life to keeping her mind and body healthy.

“I eat properly – I don’t nibble on junk food and that sort of thing,” she said, adding she also doesn’t take pills. “You keep your mind working. Your mind governs an awful lot of what your body does.”

Brown keeps her mind active by keeping up on current events around the world, playing games on the computer and doing crossword puzzles.

Living on her own is another contributor to Brown’s longevity.

“I have a whole house here to keep busy with,” she said. “At the moment I’ve got six bouquets of flowers I’ve got to make sure they are all watered, I have outside flowers I have to water. I do all my meals. I putter around and clean this, clean that, do the dusting.”

Brown’s daughter Mary Andrews, who lives in Longview, is not surprised her mom made it this far.

“She’s so healthy and she’s so smart about how she lives and how she eats,” she said.

Andrews said her mom has some help with home care and a housekeeper, but for the most part she takes care of herself.

“She wouldn’t live anywhere else,” she said. “She’s very independent.”

Having lived in Black Diamond for 85 years, Brown has her share of visitors, whether it’s family or friends.

Andrews said her mother, who has arthritis in her spine and joints, uses a walker to get around and was driving until she was 90-years-old.

“There’s six of us girls who started school together in Black Diamond and there are three of us that still have their mothers,” she said. “Everybody that you talk to thinks it’s just amazing.”

Andrews may not have been surprised about her mother’s longevity, but making the 100 year mark was a surprise for Brown.

Brown said she was 15 years old when her family moved to Black Diamond. She said they moved around a lot before then, including to Calgary and Lethbridge, but it was Black Diamond where her family finally settled.

“It was a real boomtown,” she said. “We lived in a tent the first winter.”

Brown said her dad built a house about a block from where she lives today and she remembers a childhood spent skating on the river, playing ball and tennis, curling and going to dances.

She worked as an administrator for the Town of Black Diamond for 20 years and served on numerous committees and assisted with various projects including the seniors’ lodge and library.

Having reached the centennial milestone brought congratulations and birthday wishes from dozens of friends, family and acquaintances via Facebook, email and regular mail – including a letter signed by Her Majesty Queen Elizabeth II herself.

“I especially liked the one from the Queen because her picture was on it,” Brown said. “The picture made it more personal.”