Winter sporting organizations in the Diamond Valley area look forward to getting ice time in Black Diamond this winter.
0
Jul 9, 2014 12:00 AM By: Tammy Rollie 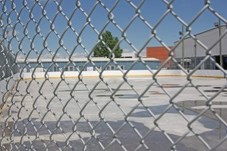 Construction of a roof on the Scott Seaman Outdoor Rink will take place throughout the summer and is expected to be complete for the fall season. The roof will not only allow sporting organizations more ice time, but is expected to reduce overall operating costs.

Winter sporting organizations in the Diamond Valley area look forward to getting ice time in Black Diamond this winter.

The Town of Black Diamond is allocating $450,000 from its capital reserve funds and an anonymous donation of $100,000 to construct a roof to cover the Scott Seaman Outdoor Rink that will include a sun/wind screen on the west and south sides of the facility, as well as changing the lighting over the surface to LED. Construction of the roof was awarded to CDC ChangePoint of Calgary and will take place over the summer months for completion by the 2014 fall season.

Depending on the total cost of the roof, the Town’s funds may also allow for the purchase of penalty boxes, players’ boxes, timekeepers box and to replace the chain link fence on the boards with tempered glass.

Heather Glazier, president of the Foothills Figure Skating Club, said with the club’s membership almost tripling last year over the previous year and having a roof over the outdoor rink will make a big difference in terms of ice time for the club.

She said it would also allow the club to finally host Skate Canada competitions with two ice surfaces available, bringing clubs from other communities into Black Diamond.

“We are fighting for ice time because nobody has enough,” she said. “Having that extra ice time is beneficial to everybody.”

Although the town currently has two outdoor skating surfaces, Glazier said the Foothills Figure Skating Club is restricted to using indoor rinks as uneven or choppy ice caused by the elements, including snow and sun exposure, wreaks havoc on the club member’s skates.

Black Diamond mayor Sharlene Brown said construction of the roof will extend the operation of the Scott Seaman Outdoor Rink, reduce the load on the refrigeration system and allow increased use of the ice by various groups.

“Because the ice will always be frozen and because it’s covered, even in inclement weather, people are able to use it,” she said. “The operations and maintenance of it will decrease. The refrigeration doesn’t have to work as hard. There is all those little things that people don’t think of that affect the usage. Now we can turn that into a full time facility.”

The refrigeration system used to keep the ice surface cold will operate less as the roof will protect the ice from melting from sun exposure, reducing power costs. Lines and logos can also be added to the ice surface this season to allow for regulation hockey games.

“When the sun is shining on the ice it melts the ice and creates more of an operational cost,” said Brown of the rink in its current state. “When we put a roof on it it’s going to save costs and maintenance.”

Information presented at Town council last month shows the Oilfields Regional Arena was booked an average of 241 days and was used 1,565 hours per year the last five years, bringing in an annual revenue of $20,000. Installation of the roof could result in an increase in revenue of more than $60,000 annually, it stated.

The Town of Black Diamond has been in discussion with the Scott Seaman Foundation about its plans for a roof and has been putting funds into a reserve account for the project since it was built in Black Diamond in 2008, said Brown. Until this year, construction costs exceeded the amount in the reserve funds, she said.

“It’s been a project that’s been on the books for a long, long time,” she said. “I’m very much looking forward to having it covered.”

Brown said a big portion of the money was collected through the Fortis Franchise Agreement. Rather than charge an administrative fee on residents’ gas and electricity bills like some municipalities do, the Town charged a minimal fee the last five years to go into general revenue for the project, she said. The rest of the $450,000 collected was money the Town had put in reserves.

With plans to eventually make the arena an indoor facility, the roof design will allow for the addition of walls in future years when finances allow it.

Grazier said the Foothills Figure Skating Club and Foothills Minor Hockey Association are in discussions about hosting fundraising events in the community to raise money to get the arena converted to an indoor facility sooner.