A foothills man who spent close to 25 years working on ranches is showing people how it’s done this weekend.
Jul 30, 2014 12:00 AM By: Tammy Rollie 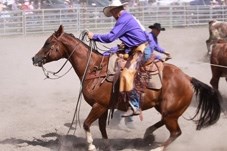 A foothills man who spent close to 25 years working on ranches is showing people how it’s done this weekend.

“We sort cattle and we brand cattle and we doctor cattle,” he said. “I think for the most part the majority of people are out of touch with what goes on in rural and ranching type situations. It’s good that people still realize these things go on. Some of it is a part of everyday life for some of us.”

Esser’s team is made up of neighbours, co-workers and friends who help each other out from time to time. Esser has been competing in the Bar U Ranch’s Old Time Ranch Rodeo for about a decade.

“It’s a way to get together with a bunch of friends and people who do the same kind of work that we do and have some laughs and see how we stack up against each other,” he said. “We’ve occasionally won individual events, but I don’t think we’ve ever won the Bar U. We try as hard as we can, but no one is going to lose any sleep over it. Our goal is to make it out with a whole hide each time and have some laughs more than anything.”

“It’s really nice to see the workmanship of the cowboys involved in these events,” he said.

McLean said his favourite event to watch is the broke horse race.

“These are ranch horses stripped of all their tack, let loose in the arena, roped, he has to put a saddle and tack back on and mount up and ride back,” he said. “Most of the horses take offence to how quickly that’s done. There’s lots of bucking.”

Participants are timed and scored at each event and the team with the best score is presented a silver Bar U belt buckle, bragging rights and a spot in Edmonton’s Heritage Ranch Rodeo this fall, said McLean.

“This is probably our premier event of the year for attendance,” he said. “I think the ranch rodeo seems to catch everybody’s imagination - just the fact that you’re close to the rodeo action and it’s real cowboys doing real jobs.”

Event organizer Charlotte Esser, Esser’s wife, said many teams in the event are competing in a circuit of ranch rodeos across the region including Nanton and Pincher Creek.

“Competition is usually fairly steep at these things,” she said. “This is what they do for a living and they are professional at it.”

Charlotte said she got involved with organizing the Old Time Ranch Rodeo to bring recognition and appreciation to the rich ranching history in the area.

“It’s a part of who we are and it’s something that I find that we need to keep involved with,” she said. “It’s not as though you would see this at any rodeo. We just came out of the Calgary Stampede, which is a lot faster paced than the ranch rodeo, but it gives you something that’s a little bit closer in reality to what we do on a ranch.”

A display is also set up at the Bar U Ranch visitors centre featuring memorabilia from the First World War as a tribute to the horses that served in wartime.

For more information about the Old Time Ranch Rodeo go to www.pc.gc.ca/eng/lhn-nhs/ab/baru/index.aspx