Return of summer camps a relief in Black Diamond and area

The BGC Foothills Clubs is operating its summer camps this year, which is a relief to families who couldn't access the service last year due to the COVID-19 pandemic.
Jun 30, 2021 10:00 AM By: Tammy Rollie 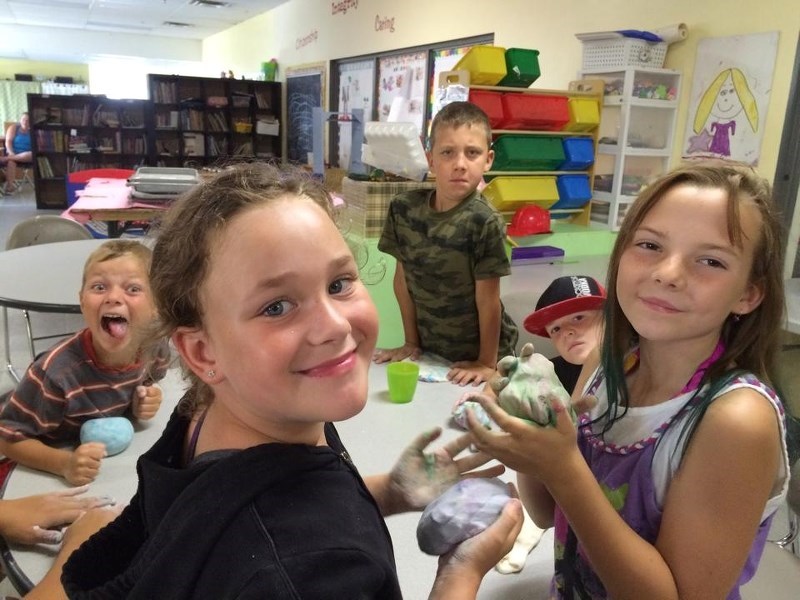 Abby McCasey, left, and Breeze Pelrine play with clay in a BGC Foothills Clubs program before the COVID-19 pandemic. The club is bringing back its summer camps in July following the Province's announcement that it will lift most COVID-19 public health restrictions effective July 1. (Western Wheel File Photo)

Single mom Jamie Hourihan is breathing a sigh of relief knowing she won't have to rely on her mother again this summer to watch her young boys.

For four consecutive summers, Hourihan has enrolled her sons in BGC Foothills Clubs’ summer camps and daycare, yet she was on her own during the COVID-19 lockdown a year ago.

After spending months worried she’d face the same fate this year, Hourihan is ecstatic that the club, formerly called the Boys and Girls Clubs of the Foothills, is going ahead with its summer camps this year.

“As a single mom I rely on those facilities hugely,” said Hourihan. “With them shutting down last year there was nowhere else to go.”

While daycare could have been an option for last summer, a change in the start hours due to the pandemic didn’t fit Hourihan’s work schedule.

“It was a lot of searching and trying to find something affordable,” she said. “If I brought them into the city (where I work) it would have been double the rate. I just couldn’t afford it. It would make no sense to go to work.”

The Province’s announcement that almost all COVID-19 public health restrictions will be lifted on Canada Day as the province prepares to enter the final stage of its COVID-19 reopening plan is a long time coming for the charitable organization, which operates day camps, daycares, before--and-after school programs and teen programs in Black Diamond, Crowsnest Pass, Eden Valley, High River and Nanton.

“Last year we didn’t run the camps so we are really excited to be running the camps this summer,” said CAO Shirley Puttock. “We are still at the regulated cohort size, but I suspect that is going to change soon so we can take some kids off the waiting list and bring them in the summer camps.”

The Black Diamond club will begin the summer at capacity with 27 children per camp and three trained staff. Puttock said the club previously had up to 50 youngsters in its camps, which run weekly from July 5 to Aug. 20 from 7 a.m. to 6 p.m.

“It certainly has an impact on our revenue, but we will soon be back to normal here, which will be wonderful for our kids,” she said. “The kids are very much in need of some fun.”

This year’s camps will provide 12 summer jobs in the five communities, Puttock said, but they will have their work cut out for them during the pandemic.

“It’s really impacted the staff,” she said. “They’ve had a lot of additional work to do with the cleaning requirements.”

When the Province all but shut down in March 2020, BGC Foothills Clubs laid off its staff for three months and cut the number of children in its programs.

The daycares reopened in June and the before-and-after school programs in September, but not without some hiccups.

Puttock said the clubs was forced to shut down its before-and-after school program in Black Diamond and its Black Diamond daycare once each due to someone having come in close contact with COVID-19, before reopening 14 days later.

“That’s been hard on everybody,” she said. “There’s a lot more work for staff and it’s a hardship for families. All of a sudden there was no childcare for two weeks.”

While the daycare was able to operate at full capacity, Puttock said that wasn’t the case for Black Diamond’s before-and-after school program.

“We are licensed for 70 in the Black Diamond club and we could only take 27 with our three staff members,” she said. “I’m hoping it changes. We’re hoping to be at full capacity again in September.”

During the past year, the before-and-after school program had to restrict activities like archery and hiking that participants enjoyed in previous years to prevent the potential spread of COVID-19, Puttock said.

“We haven’t been able to do much of anything,” she said. “It’s been difficult times for sure, but we’ve survived it.”

When the club announced it was going ahead with its summer camps last spring, Puttock said registration filled up instantly.

Summer activities will include soccer, baseball, swimming and field trips. Indoor activities will operate out of the Flare ‘n’ Derrick Community Centre in Turner Valley, leaving the upper level of the Oilfields Regional Arena available for free teen drop-in.

“We just figured the older kids need a place to hang out with their friends to play some foosball and have something to eat,” she said. “We felt there was a real need for it the way kids have been locked down.”

To help offset this year’s lost revenue, Puttock said the Town of Black Diamond cut the club’s arena lease fees in half while the Town of Turner Valley provided the club with a grant to pay for the Flare ‘n’ Derrick summer rental fee.

“We’re happy things are going to be returning to normal and we’re really happy to be able to accommodate our families and our kids this summer.”

For more details about BDC Foothills Clubs and the services it offers visit bgcfoothills.com