Homeowners in a Turner Valley neighbourhood hope their collective voices will convince town councillors to reconsider closing a road that gives them direct access to Black Diamond.
0
Feb 11, 2015 12:00 AM By: Tammy Rollie 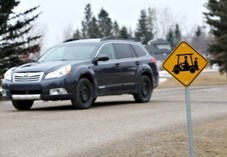 Royalite Way residents are hoping Turner Valley council will reconsider a bylaw that includes the closure of Imperial Drive through the golf course east of their subdivision.

Homeowners in a Turner Valley neighbourhood hope their collective voices will convince town councillors to reconsider closing a road that gives them direct access to Black Diamond.

Dozens of Royalite Way residents attended an open house at the Sheep River Library on Feb. 4 to express their opposition to a bylaw passed in 2007 to construct a new access road from Royalite Way south to 16 Avenue and close Imperial Drive from the villas east to the Turner Valley Golf Course.

Royalite Way resident Ron Thomson said while he understands the closure of the road to the west of his home is crucial due to erosion concerns, he feels it should remain open to the east.

“You talk to people here, it’s clear they’re not happy about it,” he said. “A community is directly involved and to assume that planners have a greater degree of intellect and planning capacity over and above the people that are going to be directly affected is just utterly arrogant.”

Although the bylaw was approved years ago, Barry Williamson, the Town’s chief administrative officer, said the developer who agreed to build the new road walked away from the project and the Town couldn’t foot the bill. Therefore the roads remained unchanged for years, he said.

During the 2013 flood, a large portion of the Sheep River bank eroded, bringing the bank closer to a section of Imperial Drive. The Town applied for and received money from the Flood Recovery Erosion Control program to construct a new road to the south so it could close that road. Construction of the new road began the end of 2014.

Thomson said residents should be invited to meet with the Town, landowner and Turner Valley Golf Club to come up with the best solution.

“Had they done that earlier we probably wouldn’t be facing the dilemma that we are,” he said. “There is a real attitude among the residents to be a consolatory and as openly planned as possible. This is not designed to be them and us. It should be us all the way.”

During last week’s open house, Thomson said residents received a commitment from a number of councillors to reopen the bylaw.

“That’s the only way to correct a flawed undertaking,” he said. “There was no direct consultation. Open houses tell you what they’ve decided for you, direct participation allows you to sit at the table and find a common solution.”

Williamson said public hearings and open houses, both of which were held prior to the bylaw being passed, are intended to gather public input.

“The consideration of input doesn’t drive the decision, it’s a consideration to the decision,” he said. “The open house was meant to share information with what currently is going on because of the his flood related project. It will be up to council whether they want to do anything further with that.”

Williamson said the decision to close a portion of Imperial Drive came from residents’ concerns about traffic accessing the golf course through their subdivision.

At last week’s meeting, he told attendees if they want the bylaw changed they will have to convince council.

“Say you want to revisit it and state a reason,” he said. “If they feel it’s reasonable they can make the decision.”

Williamson said comments made before, during and after the open house will be collected in a report and presented to council for review.

Coun. John Waring, a Royalite Way resident, said he has no issues with closing Imperial Drive between his subdivision and the golf course.

“Any impact on the community where we live is very minor, in my opinion,” he said. “The only real inconvenience is the extra drive to the golf course. We live close enough to the golf course to walk or bicycle.”

Waring said council will revisit the bylaw based on the reaction of residents.

“The final decision on what happens to the east side of Imperial Drive is still subject to decision,” he said. “There are some people that would like to keep it open. At the end of the day you have to look at what’s good for all of Turner Valley as well.”