Two Turner Valley women concerned about the quality of water residents may soon be drinking will appear before the Environmental Appeals Board, likely in September.
0
May 14, 2014 12:00 AM By: Tammy Rollie 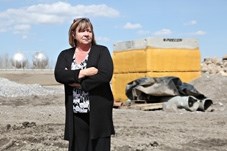 Turner Valley Mayor Kelly Tuck says the appropriate process was followed to ensure water at an infiltration gallery in the Sheep River, expected to add to the town&#8217; s water supply in a few weeks, is safe. The Town is fighting an appeal made by two citizens concerned about the water&#8217; s proximity to oil and gas infrastructure.

Two Turner Valley women concerned about the quality of water residents may soon be drinking will appear before the Environmental Appeals Board, likely in September.

The appeal concerns the water intake gallery’s proximity to oil and gas infrastructure, an industrial landfill site they say was used from the 1940s to 1970s by the Turner Valley Gas Plant and 18 active septic tanks in Calkins Place.

In 2008, Walsh successfully appealed the construction of a raw water reservoir in Turner Valley, resulting in an increase in testing requirements for the water.

“I don’t think there has been enough investigation by Alberta Environment or the Town to know what condition these pipes are in,” she said of underground infrastructure near the infiltration gallery. “Nobody documented where things were. It’s a 100-year history, so there are a lot of unknowns. I just think it’s too high a risk of an area.”

Walsh said she read reports provided to the Town of Turner Valley by Calgary’s Stantec Consulting Ltd. in 2011 earlier this year that states an industrial landfill was used by the gas plant across the river from the gallery and there are 32 oil and gas pipelines within 200 metres of the infiltration gallery site.

“My concern with the landfill being across the river is that I wondered if the parameters for testing are adequate,” said Walsh. “Are we testing for all possible contaminates?”

Construction on the infiltration gallery is now complete and undergoing testing over the next few weeks before it will be added to the drinking water, said Turner Valley Mayor Tuck.

Tuck said the appropriate process was followed for construction of the gallery and she is confident the water is safe to drink.

“I believe through this whole process every department, including the Town of Turner Valley, has been very diligent ensuring we have not missed one step,” she said. “I know and I trust that all of the steps have been taken to ensure that the water is safe. We still plan to deliver water to the reservoir sometime this summer.”

Residents in Black Diamond and Turner Valley have been under a water restriction since Black Diamond lost its water treatment plant in the 2013 flood.

Turner Valley has been supplying water to residents in the neighbouring community since June 21, 2013.

With the need for water suddenly doubled, the Town of Turner Valley has been securing additional water sources to meet that need, and Tuck said the process has not been rushed.

“We have gone step by-step-to ensure we ticked every box along the way and every little thing that comes up we are making sure that we are ticking the box and so is the province,” she said.

Walsh requested a stay to put a stop to construction of the infiltration gallery earlier this year, but it was denied.

Gilbert Van Nes, Environmental Appeal Board lawyer and spokesperson, said for a stay to be accepted the applicant has to prove irreparable damage is occurring to the environment and public health.

Because the water source was not being used at the time of Walsh’s request, there was no imminent harm, he said.

Walsh said she is disappointed her request was denied.

“They can continue and it will all be hooked up by the time we get to the hearing,” she said. “That’s a concern to me as well.”

Walsh said what she would like to see is more testing put in place to identify and rid the water of any oil and gas related contaminates and pharmaceuticals and household chemicals that could be in the ground because of 18 septic fields in Calkins Place.

Tuck said the closest septic tank is approximately 85 metres from the infiltration gallery and the second closest is 90 metres. The rest are located more than 100 metres from the site.

The septic tanks will be decommissioned this summer once sewer pipelines are in place for the residents to join in the town’s sewage system.

He said once Walsh and Walker, Alberta Environment and the Town of Turner Valley submit their issues this week the board will take up to five weeks to review that and make a decision.

Walsh applied for records from the Town and Alberta Environment, which will involve another round of submissions if the request is deemed relevant and necessary to the hearing, putting the hearing to September, he said.

Van Nes said the hearing will be advertised once a date is set and members of the public with pertinent information are allowed to present that information. The Environmental Appeals Board will then make a recommendation to the Minister of Environment, who will make the final decision.