Resident ready to make an impact

A Turner Valley man known for getting involved in his community is taking it to the next level as his Town’s newest councillor. John Waring was acclaimed to Turner Valley’s Town council when no one else stepped forward to run for the vacant seat.
0
Sep 10, 2014 12:00 AM By: Tammy Rollie 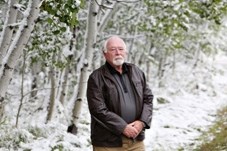 Turner Valley resident John Waring will be sworn in as the Town&#8217; s newest councillor on Sept. 15. Waring was acclaimed last week when no one else ran for the position.

A Turner Valley man known for getting involved in his community is taking it to the next level as his Town’s newest councillor.

John Waring was acclaimed to Turner Valley’s Town council when no one else stepped forward to run for the vacant seat.

“I wanted to become a member of the council to join a team that would work together to help the residents of Turner Valley,” said Waring.

Waring, who was gearing up for an election, was caught by surprise when he learned no one else ran for the council position.

“There were rumours that there were two or three other people (running),” he said.

Waring even began preparing for his campaign by creating signs, brochures and a campaign team.

“There wasn’t the opportunity to knock on doors and talk to people,” he said. “When you win an election you feel you have the public behind you.”

Waring said he still feels people were behind him, even if he wasn’t elected.

“I do feel I have a lot of support in Turner Valley,” he said. “I talked to people and people were wishing me well on Facebook.”

Turner Valley Mayor Kelly Tuck was surprised other residents didn’t run in the byelection. She, too, heard rumours that more people would run.

“It’s definitely more fun when there is (more applicants),” she said. “It gets people engaged, it gets them talking. It brings out people that normally don’t come out.”

Tuck attributed the lack of applicants to residents’ satisfaction with council’s direction.

“I think it says that people are happy,” she said. “There are no major controversies going on right now either.”

Tuck said not having an election will save the Town about $5,000 in staffing, ballots, printing and advertising costs, and will put Waring at the council table two weeks sooner.

The election was scheduled for Sept. 30.

“It gets him that much closer to getting the information to be on board where we are at,” she said. “There is definitely the learning curve of where every single project is at.”

Waring and his wife Irene moved to Turner Valley nine years ago.

Over the years, Waring served as director of the Turner Valley Golf Club, chairman of the pedestrian safety task force, member of the Municipal Planning Commission, volunteer at the Sheep River Library and volunteer at the Boys and Girls Club of Diamond Valley. His wife also served numerous volunteer roles.

“I’ve worked with several (councillors) on different committees,” he said. “The committees I’m on at the moment we work very well together.”

Waring said he supports the Town’s partnerships with other municipalities such as the Friendship Agreement with Black Diamond and the shared water initiative Quad Water Regional Partnership with Black Diamond, the MD of Foothills and eventually Longview.

“I’m interested in the partnerships that’s been promoted within the foothills,” he said. “If it progresses in the right way I’m hoping for operational benefits and efficiencies and cost sharing with our neighbours.”

Waring said he looks forward to contributing to the development of Turner Valley as a whole in the foothills.

“I am going to work as hard as I can to do the best I can for the people,” he said. “Until you actually sit at the table with the other members and get into the nitty gritty details of every day life I’m sure some of my ideas may change and some of my interests may change.”

Before moving to Turner Valley, Waring and his family lived in various locations around the world including England, the Middle East, Africa, Australia, New Guinea and Malaysia. The couple moved to Turner Valley for the small town atmosphere and its foothills location.

“It’s nice in a smaller area that you can get so involved in things,” he said.

Waring retired from his career as a consultant in the marine business in June.

Tuck said she is happy to have Waring as part of the team.

Waring will be sworn in at Turner Valley Town council’s regular meeting on Sept. 15.