A Turner Valley woman is launching a second appeal this year to gain access to environmental records due to her concerns about the quality of water coming from a new source close to pipelines and a former landfill.
0
Aug 20, 2014 12:00 AM By: Tammy Rollie 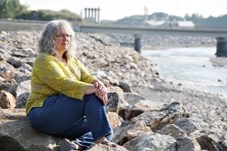 Turner Valley resident Roxanne Walsh sits beside the Sheep River in Turner Valley. She launched an appeal of the town&#8217; s water treatment plant to get documentation relating to proposed changes to the plant.

A Turner Valley woman is launching a second appeal this year to gain access to environmental records due to her concerns about the quality of water coming from a new source close to pipelines and a former landfill.

Roxanne Walsh is appealing the proposed amendments to the Turner Valley water plant through the Environmental Appeal Board because it’s part of the system providing residents with drinking water from an infiltration gallery.

Walsh submitted an appeal for the infiltration gallery last spring, concerned it has not been adequately reviewed or tested before it began operation earlier this month.

She said a report conducted by Stantec Consulting in 2011 states surface water in the area is at high risk of contamination and pollutants due to its close proximity to the former Turner Valley Gas Plant landfill, which ceased operation in the 1970s.

“It’s all a part of the water system,” said Walsh. “It’s the big picture.”

She said Alberta Environment granted the Town permission to use the water without reviewing data related to the landfill despite the consultant’s report.

“How do we know what level of clean up there was if there is no data in the file?” she said. “There is no data to show testing of anything in the leach fields. As far as I know they have not been requested or viewed.”

Walsh added the landfill was not identified on maps presented to the public at an open house that showed the project earlier this year.

“This is Turner Valley,” she said. “We have 100 years of history and this is a complex location where they are putting the water. If the residents of Turner Valley and Black Diamond think a thorough review of this landfill site or the 32 oil and gas pipelines within 200 metres is not necessary they should write letters of support for the town and ESRD (Environment and Sustainable Resource Development) to the Environmental Appeals Board. If there is enough support for the town and ESRD I would consider withdrawing my appeals.”

Walsh said she is concerned about its proximity to oil and gas infrastructure, the industrial landfill site used by the Turner Valley Gas Plant for decades and 18 septic fields in Calkins Place.

He said he has no reason to believe the drinking water is unsafe.

“We were free to proceed and that’s what we’ve done,” he said. “The Town is liable for the safety of the water. We have to absolutely make sure it’s safe before we turn it on. We wouldn’t have turned it on if we didn’t (feel it’s safe).”

Williamson said the addition of the infiltration gallery allowed the Town to reduce its water restrictions from Level 3, which prevented residents from using town water for outdoor recreation, watering or washing, to Level 2.

The appeal for the water infiltration gallery, which began operation in early August, is being postponed to January so both issues can be dealt with at the same time.

“We will rule everything into one hearing,” said Gilbert Van Nes, Environmental Appeal Board lawyer and spokesperson on Monday. “We’re now looking at the last three weeks of January.”

Van Nes said documentation for the latter appeal will not be ready for the original September hearing date.

He said lawyers are awaiting records showing amendments for the Water Treatment Plant expansion plans and documentation from the Town of Turner Valley and Alberta Environment.

“By the time we finish that and get it from Alberta Environment and review it to set the records for the water treatment plant amendment that will probably take well into November,” he said. “And we don’t like to have hearings in December.”

In 2008, Walsh successfully appealed the construction of a raw water reservoir in Turner Valley, resulting in an increase in testing requirements for the water.

The latest hearing will be advertised once a date is set and members of the public with pertinent information are allowed to present it.

The Environmental Appeals Board will then make a recommendation to the Minister of Environment, who will make the final decision.