Duke Hartell is establishing a conservation easement with Foothills Land Trust in the sale of his ranch near Longview.
Nov 21, 2020 8:00 AM By: Bruce Campbell 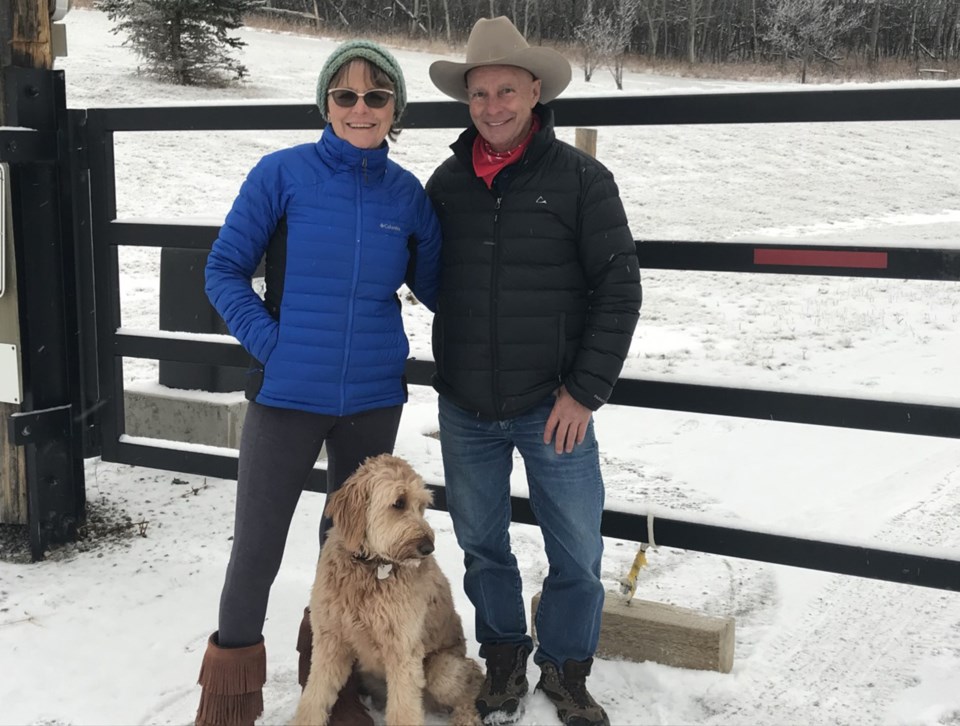 Leslie Dewald and Duke Hartell at their ranch north of Longview. The Hartells are selling their ranch pending conditions of a conservation easement to maintain the environmental integrity of the land. (Photo submitted)

A ranching family that has been a good steward of its property north of Longview for more than 100 years is making sure the property is cared for for another 100 years and beyond.

“My grandfather passed on to my dad (Alex Hartell) that we are just stewards of the land and while we have it, we are to be good stewards of the land  — leave it as we found it or maybe a little better,” said the 70-year-old Duke Hartell. “Dad passed that idea on to me and I totally agree with it.”

Duke is selling the 1,738-acre ranch —  however, he is working to have the sale under the condition of placing a conservation easement with the Foothills Land Trust.

The easement would mean the land would stay as it is — no acreages or development on the Hartell property.

“Twelve hundred acres of this land is still native pasture, it has never been plowed,” Hartell said. “I’m hoping to find someone (to buy) who has the same mind thought of me – interested in keeping it as a ranch as it is.”

Sandy Bruce, president of the Foothills Land Trust, said the values the Hartells have are typical of those landowners who establish a conservation easement.

“They have been brought up with a certain kind of ethical view of the land. It is very common of the people we deal with,” Bruce said. “They want to leave a legacy.”

The Hartells have already established that legacy in the area.

The small community of Hartell was established in 1930 and it remains a hamlet in Foothills County.

Duke’s grandfather, Francis John, settled on the property north of Longview, (near the Highway 22 and Tongue Creek Road intersection) in 1918. He raised and sold Suffolk Punch heavy horses until the end of the Second Word War.

When ranchers and farmers turned to tractors instead of horses after the war, Francis switched to ranching – It’s been that way ever since.

Duke said the ranch was an idyllic place to grow up.

“Life was pretty simple then —up until I was about 12 years old when I started to work,” said Duke, a graduate of Oilfields High School. “I fished, played, tramped around the bushes, had tree-houses and all sorts of good things.”

Tongue Creek meanders through the property. The ranch also offers spectacular views,  and bears, cougars, moose, deer and other wildlife have been seen by the Hartells, said Leslie DeWald, Duke’s wife.

Those good things will continue thanks to the conservation easement.

Larry Simpson, of Nature Conservancy Canada, said while there is a generous federal tax break for those purchasing land with a conservation easement, that is not why people buy the land.

“For the right person, acquiring this and protecting this magnificent view for them and their family is significant emotional return and there is great value in that.”

Sarah Michel of Century 21 Foothills, who is listing the Hartell property, said while the easement may close some doors in regards to potential buyers, it opens doors to others.

"There are so many misconceptions and negative feeling towards easements,” Michel said. “The easements have come a long way where a buyer can come on board and say I want to do this, and I want to do that and Duke can say: ‘Great let's makes that possible for you while still conserving the land.”

“They need that flexibility to run a successful ranch.”

Michel said there has been interest from potential buyers.

“We don’t have anything on the table it is still for sale,” Michel said. “They love the ranch, they know where it is and they value what it is. “That’s an encouraging thing for all of us.”

To see an aerial view of the Hartell ranch go to click here.