An open house on Aug. 29 is one of three ways the Turner Valley Parks, Paths & Recreation Advisory Committee is seeking public feedback on its next steps regarding recreation.
0
Aug 31, 2019 11:00 AM By: Tammy Rollie 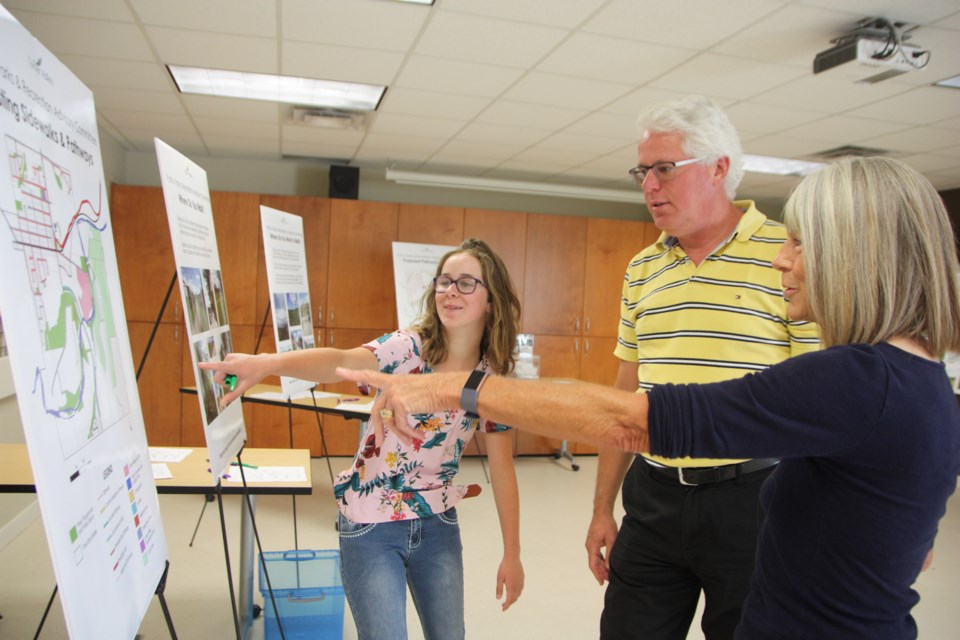 More pathways and a multi-use day area were among ideas presented to Turner Valley residents last week in a committee’s initiative to improve recreation in town.
The Turner Valley Parks, Paths & Recreation Committee invited residents to the Sheep River Library Aug. 29 to share which pathways they’re using, where they want to see more and offer input and feedback on the committee’s ideas to improve recreation in the community.
Public input will also be collected in a survey at turnervalley.ca that closes Sept. 20 and during an open house Sept. 10 from 6 p.m. to 8 p.m. during community registration night in the Flare ‘n’ Derrick Community Hall.
“These are simply ideas,” said Joel Den Haan, committee secretary, at the open house. “We have made no decisions yet. We’re at the advisory level.”
Among the ideas are more trails to connect existing pathways, often in areas already being used by the public.
Another suggestion was a multi-use area on a seven-acre parcel of town-owned land west of Decalta Road on the south side of the Sheep River.
This area, dubbed Arrowhead Park due to its arrow shape pointing west, proposes a park, public river access, pump park, pathways, washrooms, parking, observation deck, fitness park, dog agility park and off leash park.
“There’s a fair amount of recreational activity already happening there,” said Den Haan. “It’s been owned by the town for quite some time. There’s significant potential for a fair number of uses on that parcel.”
An old pipeline access road runs through the property that people are already frequenting, said Den Haan, adding any pipelines on the property have been decommissioned.
Pat Livicker, who lives on Decalta Road, said she likes the idea of the multi-use area as a place to walk her two dogs.
“It would make it easier for people to walk their dogs,” she said. “Right now I have to go somewhere else with an off-leash park. If I’m going for a walk I would prefer something where I go out the door and walk.”
Expanding the town’s existing pathway system also appeals to Livicker, who filled in maps provided at the open house showing where she currently walks and where she would like to see pathways put in place.
“I’m a walker,” she said. “I would like to see the extension of the walking areas.”
Also attending the open house was Joanne McLean and her two sons. McLean said she attended hoping to find some recreational ideas for teenagers. She suggested a zipline.
“I’m concerned that there isn’t a lot for teenagers to do,” she said.
McLean said while Arrowhead park is a great way to attract visitors, she would like to see more done to keep teens active in the community.
“If you have teens in the community, when they are designing it they should do something really for teens,” she said.
Her 14-year-old son David has been skateboarding for six years, and often goes to skate parks in Calgary to challenge his skills. He said he would like to see a skate park in Turner Valley.
“I’m bored 90 per cent of the time,” he said.
Brother Charles, 12, said he’s ecstatic about the idea for Arrowhead Park.
“Just last year I got into 4-H (dog agility),” he said. “It would be a nice place to train my dog. It’s right across from our house so we don’t have to go far.”
Charles said with the town having no off-leash park, it’s been tough to train his dog to socialize.
“It’s nice to have dogs get adjusted to each other and know each other so they’re not pulling on the leash when meeting other dogs,” he said.
The committee last held an open house and survey seeking feedback on recreation four years ago to help determine priorities for Turner Valley’s recreation amenities.
From those suggestions, it since made improvements to area pathways, upgraded Perdue Park, Bailey Ridge Playground and Edgar Avenue Park, and enhanced trail connections through the Decalta pathway and Jack Bowman Trail.
Den Haan said what the committee proposes to council following this summer’s open houses and survey will depend on available funding.
“We’re exploring grants and we’re open to partnerships and sponsorships so we don’t have to use tax dollars,” he said. “We do not have our own budget. We need to have council’s okay for everything we do.”