Foothills residents can pay tribute to the men and women who served their country in war by donating spare change to support their veterans and pinning the symbolic red poppy to their lapels in just a few days.
0
Oct 29, 2014 12:00 AM By: Tammy Rollie 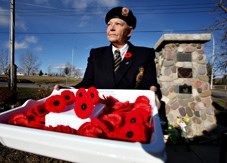 Linda Macaulay, poppy chairman and first vice-president of the Royal Canadian Legion Turner Valley Branch, holds a box of poppies. The legion kicks off its poppy fundraising campaign with a ceremony at the cenotaph on Oct. 30 at 1 p.m.

Foothills residents can pay tribute to the men and women who served their country in war by donating spare change to support their veterans and pinning the symbolic red poppy to their lapels in just a few days.

The 11-day national poppy campaign begins on Oct. 31 and runs through to Remembrance Day. The campaign reminds Canadians of those who fought for their country and provides support to area veterans and their families who are in need.

“They might be destitute when they come back and can’t get a job or they may be disabled and in the interim they can’t get the help they need fast enough,” said Linda Macaulay, poppy chairman and the first vice-president of branch #78. “We are a very temporary help.”

“We were so surprised because it was right after the flood,” she said. “I was stunned. It just kept coming in. All these people affected by the flood, you would think their dollars would be tied up elsewhere and still they gave.”

The Turner Valley branch is lending a hand to the High River legion this year by inviting their volunteers to run their poppy campaign in some Okotoks businesses in November as several High River businesses closed after last year’s flood, said Macaulay.

Malcolm Hughes, deputy commander of District 5, said money collected at poppy campaigns is held in trust for foothills veterans and their dependents.

Donations can be used for anything from making a veteran’s home more wheel chair accessible to purchasing extra equipment for those living in institutions, he said.

“It’s an official kick-off,” he said. “It recognizes municipal leaders and the relationship between the legions and the communities. It’s kind of symbolic.”

Hughes is currently working to start a legion branch in Okotoks. He has been involved with the legion provincially and nationally for years.

“We are more than just a place that veterans go, we do a lot of things in the community with youth and seniors and veterans,” he said.

The poppy campaign kicked off earlier this week with an official ceremony in Ottawa to pin the poppy on the Governor General.

Following the poppy ceremony in Edmonton with the Lieutenant Governor of Alberta on Oct. 30 at 11 a.m., local government officials will receive their poppies at ceremonies at the Okotoks cenotaph at noon and Royal Canadian Legion, Turner Valley Branch #78 cenotaph at 1 p.m.

Poppies will be available in Okotoks at Sobeys, Walmart, Home Depot and Costco. Boxes will also be located in various stores across the foothills.