The descendents of foothills homesteaders shared stories of survival and bravery in High River last weekend.
0
Feb 4, 2015 12:00 AM By: Tammy Rollie 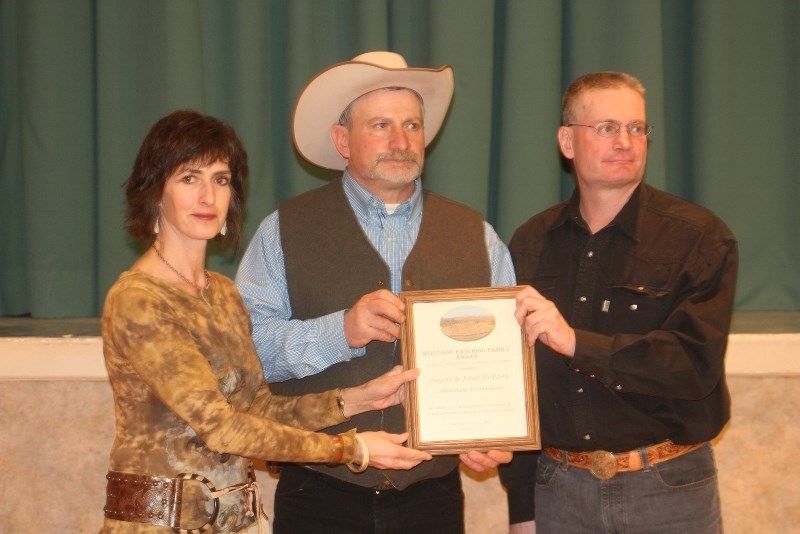 Avril Chattaway, president of Friends of the Bar U Historic Ranch Association, presents brothers Lorne and Angelo DePaoli with a plaque to honour their grandparents Angelo and Ester DePaoli at the Stockmen&#8217; s Dinner Jan. 31.

The descendents of foothills homesteaders shared stories of survival and bravery in High River last weekend.

The grandchildren of Wilfrid Middleton, Angelo DePaoli and Ed McKethen talked about the pioneers breaking ground in the region more than a century ago at the Friends of the Bar U Historic Ranch Association’s annual Stockmen’s Dinner last weekend.

The honorary ceremony took place at the Highwood Memorial Centre on Jan. 31, beginning with Middleton’s grandson Wilf telling the story of his grandfather boarding a steam ship from England to Canada in 1906.

Wilf said his grandfather, the seventh of 11 boys, settled about six miles west of Turner Valley and worked at logging mills and milked cows in the creamery in Okotoks where the Bull Pen Pub is now located before his ranch became a full operation.

He talked about the dangers of being in the middle of nowhere, telling the story of his grandfather’s homesteading partner falling off the roof while repairing the barn and breaking his leg.

“I could only imagine the big job it was getting him to a doctor,” he said. “Working alone with basic health care hours or sometimes days away way only one small obstacle that everyone dealt with.”

Wilf also talked about how his grandfather volunteered to serve in WWI, but was sent home.

“Five of his brothers had already signed up and the officials felt the family had sacrificed enough,” he said. “Granddad was told he could contribute more to his country and the war effort by producing beef.”

Despite the tough times, Wilf said it’s hard to believe his grandfather lived until just shy of his 98th birthday. His grandmother also passed away in her 90s.

“That’s quite amazing, considering the tough life they lived,” he said.

Avril Chattaway, president of the friends association, said honouring pioneer families in the region is an annual tradition.

“We go as far back as we can,” she said. “We scour the history books.”

Chattaway said it’s important for younger generations to know their heritage and history.

“I’m a pretty modern girl, I like my microwave and washer and dryer and I couldn’t image what it would be like back in those days,” she said. “I’m starting to read about it more and more. It’s just something everyone should know about.”

Keith Hitchner told the story of his grandparents Ed and Lena McKethen, who were born in Missouri and moved to Montana where Ed had relatives.

Hitchner said it was there that his grandfather lost his left arm when it got caught in the drive belt of a sawmill and was pulled completely off his shoulder.

Shortly after, Ed’s cousins, who bought land in the Fosk area near what is now Longview, convinced Ed to settle with them.

When heading to Alberta with a team and wagon in 1905, one of Ed’s horses was struck by lightening and killed at Coutts.

His grandfather borrowed a horse from his cousins and returned for the wagon.

The next summer, Ed, Lena and their son Elmer moved to Fosk and began their new life.

“Granddad Ed was a very resourceful man,” Hitchner said. “He would do most things with one arm by wearing a strap with a hook on it over his shoulder.”

The family lived on the homestead until 1918 when they traded it for the quarter section across from Horizon Farms at Pekisko Creek bridge.

In 1936 they sold it and bought three quarters on what is now 112 St. West, bordering the Highwood River.

The final story told was that of Angelo DePaoli, by his grandson of the same name.

DePaoli said his grandfather immigrated to Canada from Italy with his brother in 1912 at age 18 and settled at Meadowbank.

“The two brothers worked hard in the railroads and in coal mines and acquired enough money with the help of a third brother in Italy to purchase the initial farm where Delbert and Barbara DePaoli now reside,” he said.

Angelo and Ester eventually moved to the MacMillian Creek farm, he said.

“I remember my grandfather allowing me to drive his truck while I sat on his lap when I was young and when I visited them at their High River home they would argue in Italian,” he said.

In addition to honouring families, the Stockmen’s Dinner raises money for the Bar U Ranch through a silent auction and 50/50 tickets. Money from past events helped to purchase a wrought iron sign at the entrance of the historic site and sand for the arena, said Chattaway.

“We have other special events like the trail ride in the summer,” she said. “It brings in some money, pretty good money, but the Stockmen’s Dinner is the big one where we would have the most people and raise the most money.”