Irresponsible pet owners in Diamond Valley could face penalties up to 10 times higher than before if they don’t change their ways.
0
May 28, 2014 12:00 AM By: Tammy Rollie 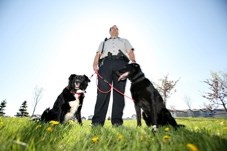 Turner Valley Peace Officer Shawn Lapointe, with his two dogs, is implementing changes to the community&#8217; s animal control bylaw, along with other peace officers. The bylaw was revised in Black Diamond and Turner Valley for the first time in more than 10 years. Among the proposed changes is in an increase in penalties.

Irresponsible pet owners in Diamond Valley could face penalties up to 10 times higher than before if they don’t change their ways.

Black Diamond and Turner Valley Town councils approved revisions to their animal control bylaws earlier this month to further address such issues as livestock, service dogs, licensing for owning more than two pets, temporary licences for looking after someone’s pet, and to bring fees and penalties in line with other communities of similar size, according to Verna Staples, Black Diamond legislative services manager.

“We haven’t written our bylaw since 2002 and haven’t raised our fees in more than 10 years,” she said.

The bylaws state a person who allows his or her dog to run at large, one of the most common dog-related offences, could face a maximum fine of $300, compared to $50 in the previous bylaws.

Other penalties include $1,000 for not providing adequate care for an animal and $500 for a dog biting a person. The amount doubles for second offences within 12 months and triples for third offences, Staples said.

“Our goal is to not to have to give them,” said Staples of the penalties. “The goal is public education and good pet ownership. When you have that you don’t have fines.”

The increase in penalties is already in effect, while the dog licence fees won’t increase until 2015, Staples said. Licence fees will increase by $5, with the amounts varying on such factors as the number of animals in the household and whether or not the animal is spayed/neutered.

Administration and peace officers in both towns collaborated throughout the process to make the bylaw as similar in both communities as possible.

Black Diamond Mayor Sharlene Brown said the increases act as a deterrent and provide a support for staff.

“For the amount of work it’s been taking for our peace officers and for cost of running the animal control bylaw has increased substantially,” she said. “We have to keep the fines in accordance with that.”

Brown said she is glad to see the addition of a special dog licence that allows pet owners to own up to four dogs. The limit in both communities was initially two.

“Lots of people have more than two dogs and we had to recognize that fact,” she said. “We’ve had occasions where people phoned in and wanted to move into the community have asked what the dog limit is. Because they’ve had three or four dogs we had so say, sorry, they are not allowed.”

Turner Valley peace officer Trever Bowman said for a resident to qualify for the special licence he or she must gain permission from neighbours and the property must be inspected to ensure the environment suits the needs of that many animals.

“We want to make sure they are kept in a safe environment,” he said. “If you want to be holding more than two we want to know you are going to be responsible for the animals and adhere to the bylaws. Irresponsible animal owners won’t be tolerated.”

Bowman said the Town’s previous bylaw dated back to 2008 and the fees and penalties were well under other similar-sized communities in the area.

“The fines previously set didn’t really warrant much of a deterrent,” he said.

Black Diamond peace officer Vicky Bolton hopes the new penalties will help put a stop to irresponsible actions by pet owners. She said many times the officers issue warnings and educate the public about the bylaws before penalties are exercised.

“Because the fines are higher people are going to listen more,” she said. “Hopefully people will start being more responsible with their pets.”