A group of high school drama students are venturing under the sea to bring to life a love story that captured hearts 25 years ago.
0
Jun 4, 2014 12:00 AM By: Tammy Rollie 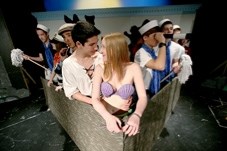 A group of high school drama students are venturing under the sea to bring to life a love story that captured hearts 25 years ago.

Grades 10 to 12 drama students at Oilfields High School are portraying Ariel, Sebastian, Eric and the nasty sea witch Ursula that had thousands of youngsters in front of television sets for months after the movie The Little Mermaid was released in 1989.

The drama students are bringing the cartoon to life with their spring musical theatre production Disney’s The Little Mermaid, JR from June 4-7.

“She’s a really big fan of The Little Mermaid,” he said. “I’m really excited to show my family and show people what we’ve done with this play. We’ve added some lines and there are some new songs that aren’t in the movie.”

McDowell is one of 30 students who will perform in the spring musical and one of the few who actually sang in a musical previously.

He performed in a musical at another school he attended and sang in front of an audience during drama camp at Theatre Alberta’s Artstrek in Red Deer last summer, but he can’t help but feel a little nervous about this week’s performance.

“When I have to sing there are some parts I have to sing alone,” he said. “Just hitting some of the notes are pretty hard and having to maneuver around and trying to keep the same tone the entire song.”

Drama teacher Sherry Schalm said most of her young actors are really putting themselves out there by singing for the first time publicly. She said there are 22 musical numbers throughout the hour-long musical.

“For a lot of them this is their first sort of musical endeavor,” she said. “I’m impressed by a lot of the students who signed up for Drama 10, not expecting to be in a musical theatre and finding themselves singing. They’ve done very well.”

“We tried to spread it around, especially with a large cast,” she said, adding students who play larger roles for the matinee play lesser roles for the evening and vice versa.

Another challenge for the students is the set. With the musical being a one-act play, Schalm said the props have to be moved for 20 different scenes, requiring the characters to arrange them as they enter and exit the stage between scenes.

“It’s a simple story because we seem to know it very well, but the staging is difficult,” she said. “We don’t change sets.”

McDowell said he’s a little nervous about the scene changes and hopes it goes smoothly for the cast this week.

“We have quite a few props,” he said. “Some of them are pretty large. It could be a bit of a struggle.”

Despite the behind-the-scenes challenges, Schalm expects Disney’s The Little Mermaid JR to delight youngsters and adults like, with staff and students from C. Ian McLaren School in Black Diamond, Turner Valley School and Longview School attending the matinees, she said.

“It’s got that youthful quality,” she said. “It’s a little more lighthearted.”

Schalm said she tries to mix up the drama productions so the students experience both serious and lighthearted sides of theatre throughout the year.

“The plays tend to be a little more serious and have a bit more adult-like focus, but the musicals we try to keep a little light-hearted,” she said. “It’s nice to strike a balance.”

The students seem to be enjoying it. Schalm said they are having a lot of fun and laughing a lot.

“I know pretty much all of my lines now,” he said.