Oilfields High School teacher goes above and beyond with indigenous students

“I keep doing it because it’s needed and because I see short and long term dividends in the kids, not just in their education but how they interact with other students and staff and the positive things that they’re doing on their own reserve.”
Jun 10, 2021 10:00 AM By: Tammy Rollie 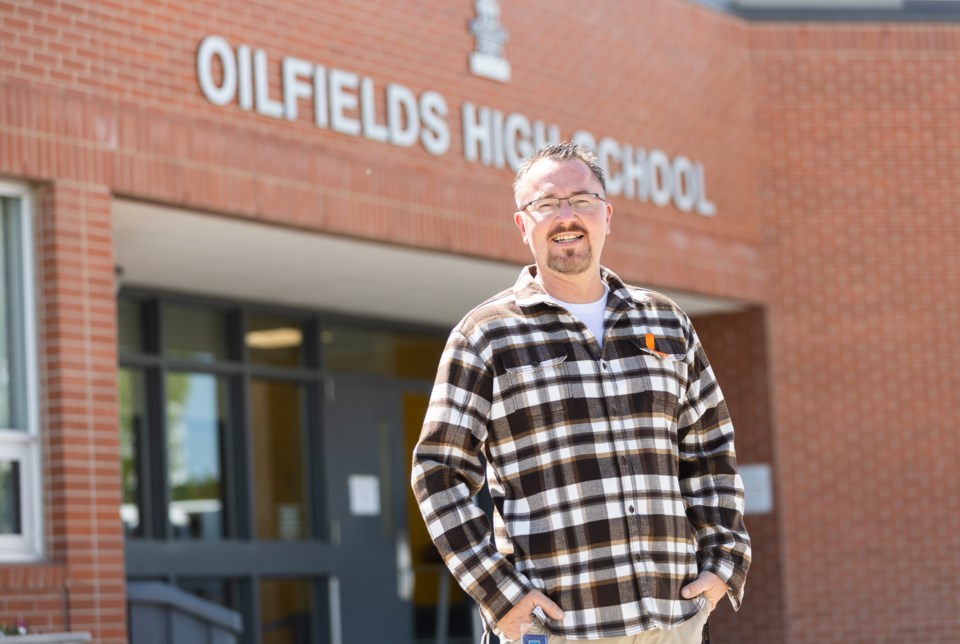 Indigenous studies teacher Darald LaVallie has been part of the Oilfields High School indigenous program since its inception. Brent Calver/OkotoksTODAY

A biology teacher who’s been a part of Oilfields High School’s indigenous programs since day one sets his sights higher than just academic success.

As the school’s Indigenous Studies teacher, Darald LaVallie focuses on supporting students in not only achieving academic success but feeling a sense of belonging while bringing their culture into the school.

“I keep doing it because it’s needed and because I see short and long term dividends in the kids, not just in their education but how they interact with other students and staff and the positive things that they’re doing on their own reserve,” he said. “I fear what wouldn’t happen if we didn’t have this program because they may not attend our school, period.”

LaVallie, who is Métis, began teaching at Oilfields in 2006 after being hired as an industrial arts teacher. A year and a half later, he moved to the sciences department with previous experience teaching science in Taber and on the Blood Reserve.

“I became involved with indigenous programs from the start,” he said. “Our geographical proximity to Eden Valley means there’s a higher-than-average population of indigenous people than in other schools in the Foothills School Division.”

Shortly after starting at Oilfields, LaVallie and the vice-principal implemented an indigenous studies option class that had students building sweat lodges, embarking on field trips and listening to indigenous guest speakers.

As the school’s First Nations Métis Inuit lead teacher, LaVallie supported students with their studies and even transporting them to and from Eden Valley.

“I would just do little things to help them get through because they needed special support due to their circumstances,” he said. “I consider myself an ally more than a very public leader.”

Six years ago, LaVallie helped to implement the Circle of Courage option class, which is based on the fundamental philosophy of the medicine wheel that includes the spirit of belonging, spirit of independence, spirit of generosity and spirit of mastery.

“Within that class we use the high school aboriginal program of studies that’s been around for probably 20 years as the curriculum, but we use the Circle of Courage as a way to deliver it,” he said. “Instead of just presenting things lesson by lesson as a history class, we focus first on the belonging part of it. We make them feel safe. When they feel safe they will learn how to be vulnerable. When they’re vulnerable they know how to trust you.”

Independence and mastery is where the curriculum part comes in.

“They learn to work alone and how to master whatever they’re doing,” he said. “It could be something school related or personal like a hobby.”

LaVallie said the school-related curriculum is the most challenging for Eden Valley students for a number of reasons. For instance, Eden Valley is 40km southwest of the school, making attending school difficult in snowstorms and if the student’s family is not supportive of the education system.

Another barrier is the sense of belonging.

“It’s about breaking down barriers,” he said. “As a teacher, it’s your connection with a child that will determine what they will do with it and for you, and vice versa. It takes some kids two to four years to be comfortable enough with me that they will let me help them in the way they need.”

Through the class, students attend conferences and workshops, including the Indigenous Youth Rising Conference at MacEwan University in Edmonton, which provides an opportunity for youth to gather and explore educational and career opportunities, celebrate culture and develop new friendship through a series of guest speakers and workshops.

“It’s about spending the time with the kids and showing them that we give up our time to help them in their lives and that’s when we find we really have those conversations,” LaVallie said. “By the end of the trip the belonging part is much better.”

The generosity portion of the class shows students generosity and gives them opportunities to be generous, whether it be organizing fundraising bake sales or making ribbons for Orange Shirt Day.

“We’re trying to raise awareness by bringing the culture into the school,” he said. “This isn’t just for the indigenous kids, it’s for the rest of us.”

LaVallie can’t help but notice some success from these initiatives.

“We see those social bonds being formed with not just people in their community, but with staff and other kids that are not indigenous,” he said. “That’s what it’s about.”

The payoff is evident in the school’s graduation and post-secondary attendance rate amongst indigenous students, LaVallie said.

“We have the only two Grade 12 girls from Eden Valley graduating and going to Mount Royal University and five students who identify as Métis going to post-secondary this year,” he said. “We are very proud of that result.”