While firefighters won’t be going door to door collecting food this month in the Oilfields Food Bank’s biggest fundraiser, people in need will be well taken care of for the next several weeks.
Nov 5, 2020 2:00 PM By: Tammy Rollie 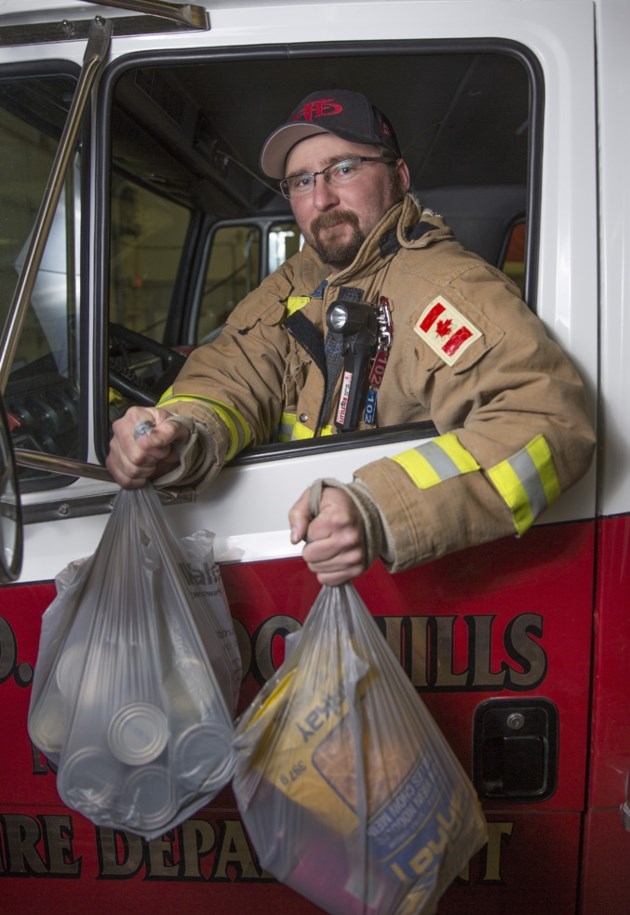 Longview volunteer firefighter Aaron Lyons with food donations from a previous year's food drive. This year's event has been postponed to 2021 in light of the COVID-19 pandemic. (Wheel File Photo)

While firefighters won’t be going door to door collecting food this month in the Oilfields Food Bank’s biggest fundraiser, people in need will be well taken care of for the next several weeks.

That’s the outlook of Karen Milne, Oilfields Food Bank director of communications, who said the non-profit association has secured enough in grant money to tide them over into 2021.

The extra financial support solidified the decision to postpone the annual Firefighters Food Drive to 2021 for the safety of residents, firefighters and volunteers, said Milne.

“When the pandemic broke out we sat down as a board and looked at what the landscape would look like if we didn’t do the firefighter food drive,” she said. “At that point we knew we had money coming from Food Banks Canada and Food Banks Alberta and the Province’s social service department and that we would probably be fine in terms of the food we could provide.”

Earlier this year, the Turner Valley & District Food Bank Association applied for and received $30,000 from the Social Services Support Grant through Family and Community Support Services, said Milne. This compares to last year’s food drive collecting 5,974 kilograms of food at a value of $32,857.

“The food bank is well funded and at this point we are well stocked,” she said. “With the Okotoks Food Bank becoming a distribution hub, surrounding food banks can access it without paying for the food. We pick up supplies that are needed and that has been a huge help to probably most of the food banks in the area.”

Milne said she saw no reason to put anyone at risk by moving forward with the annual fall food drive.

“For purposes of the physical space that we’re in and the number of volunteers we need to handle during the two-night drive, we can’t possibly physically distance to make it safe for everybody who is involved in it,” she said. “We will reschedule it when the pandemic eases or the firefighters deem it safe. Otherwise, we’re putting the entire community needlessly at risk.”

Milne said the Oilfields Food Bank saw little change in need throughout the pandemic, until October. While the numbers have not yet been tallied, she said the need spiked and that she expects to see the trend continue with mortgage, tax and loan deferrals coming due, layoffs and children returning to school.

“We’re starting to see an uptick for sure,” she said. “The one thing we are noticing an increase in is the number of first-time people and families with kids. I believe it will continue.”

Deanna Hintze, Turner Valley’s deputy fire chief, agrees that postponing the event is best for everyone, particularly with the food bank being in a good position with grants and the restructured food bank system.

“We all agreed this would be a safe way to move forward right now,” she said. “They indicated right now that they are in a good position.

During the two-night food drive in November, firefighters from Black Diamond, Longview and Turner Valley collect food and monetary donations at almost every home in the three communities.

Once the food is collected, volunteers unload, sort and stack it in the basement of the Lewis Memorial United Church in Turner Valley.

“Many of the volunteers are older,” said Hintze. “They also have the Scouts and Beavers give them a hand with stacking. Having that number of people in that area is probably not a really safe idea.”

Hintze said there are safe alternatives.

“We had offered, if they need something in the future, we could try to work something out virtually,” she said. “There are a lot of creative solutions these days."

With Christmas around the corner, the Oilfields Food Bank is accepting registrations for its Christmas hamper program, which provides individuals, couples and families in need with food for Christmas Day, including turkey or ham and all the trimmings, said Milne.

She said the food bank typically gives out around 100 hampers each year.

Registrants will receive a window of time that they can pick up their hamper on Dec. 17.

To register for a Christmas food hamper go to www.oilfieldsfoodbank.com

Anyone wishing to donate food to the Oilfields Food Bank can do so at the drop-off box at AG Foods Country Food Mart in Black Diamond or in the basement of the Lewis Memorial United Church Tuesdays from 11 a.m. to noon.

The Lewis Memorial United Church is operating the Jacket Racket program this year, inviting anyone in the region in need of coats, snow pants, mittens, scarves and other winter gear to drop by and check out the selection Tuesdays from 11 a.m. to 3 p.m. until the end of December.

The clothing will be outside of the church on warmer days and inside, with physical distancing practices in place, during colder temperatures.

Turner Valley author compiles tales of survival and strength
May 5, 2021 10:00 AM