Flags will be flying high on April 9, but there’s one in particular that has special significance this year. Veteran Cde.
0
Apr 4, 2018 12:00 AM By: Tammy Rollie 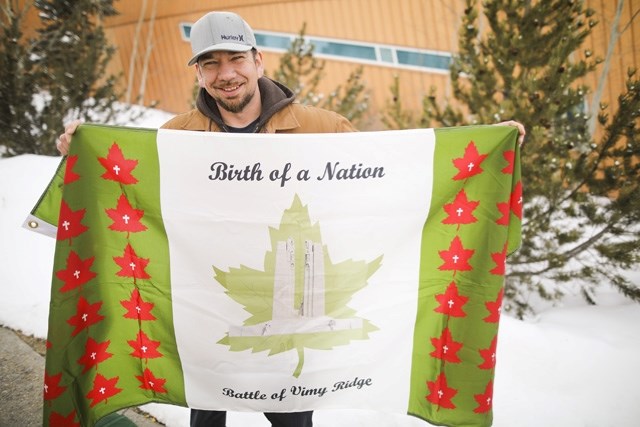 Black Diamond resident Warren Smith created a Birth of a Nation flag that will be featured in the ceremony in Turner Valley on April 9.

Flags will be flying high on April 9, but there’s one in particular that has special significance this year.

Veteran Cde. Gordon Day and Black Diamond artist Warren Smith collaborated on a creating a flag in honour of the Battle of Vimy Ridge, which will be unveiled during the Birth of a Nation ceremony in Turner Valley on Monday.

The celebration begins with a parade at the Dr. Lander Memorial Outdoor Swimming Pool at 5 p.m. that leads to the Flare ‘n’ Derrick Community Hall for a short ceremony at 5:30 p.m.

Day said it all began when Foothills MP John Barlow suggested the idea of a flag two years ago.

“I started thinking why not,” said Day. “I sketched out a design. I knew that Warren was quite an artist. I just planted a seed.”

Smith said he was honoured to be the artist behind the flag’s design.

“We went over what (Day) was looking for,” he said. “I did a little research and tried to get as much in there to represent the day and the battles. I hand-painted a version of what I thought it should include.”

Birth of a Nation Day commemorates the brave Canadians and their achievement at The Battle of Vimy Ridge, a defining moment in Canadian history 101 years ago.

In the spring of 1917, all four divisions of Canada worked together for the first time and won the most complete offensive victory up to that point in the First World War.

The military achievement raised Canada’s international stature and helped earn a separate signature on the Treaty of Versailles.

Canada’s success in the battle followed failed attempts by the British and French forces to take the ridge, and consisted of nearly 1,000 artillery pieces under the command of Lt. Col. H.G. Bing. During the battle, 3,598 Canadians were killed and Canada was recognized as an elite military force.

This monumental piece of history is depicted in the flag, which includes six rows of maple leafs with crosses in the centre of each to represent the six battles that lead up to Canada’s win at Vimy Ridge and the soldiers who died in battle.

While Smith initially added poppies, they had to be removed due to copyright issues, he said.

The centre of the flag depicts the Canadian National Vimy Memorial monument dedicated to the memory of Canadian Expeditionary Force members killed during the First World War in France and the flag features the words “Birth of a Nation” and “Battle of Vimy Ridge.”

The flag also consists of a gold maple leaf, similar to that on the berets worn by soldiers at the time of war. In addition, Smith used green rather than the red in the Canadian flag panels to represent the colour of the soldiers’ uniforms.

When the design was complete, Smith submitted it to Flagworks in Calgary to have it made.

“I just hand painted it on a canvas,” he said. “They changed the design to fit and remastered it on the computer.”

Smith will hold the flag during Monday’s ceremony.

“It’s been a long time coming,” he said. “It was really neat to be a part of it for sure. I would do almost anything for these old vets and the Legion. They’ve done so much for us.

“None of us would be living how we are today if it wasn’t for them. I think we all owe them all of our gratitude.”

“It’s to remember the Birth of a Nation,” said Day. “The more I read about it the more impressed I get. It was the first time the Canadians won on their own as Canadians. They did a tremendous job.”

Despite the efforts by Germans to hold their ground at Vimy Ridge, Day said the Canadians liberated.

“Literally, the Canadians won World War One,” he said. “It was from there Canada got a tremendous reputation. Canada was finally a nation of its own.”

Day has been involved in organizing the Birth of a Nation celebration in Turner Valley the past seven years.

“I can’t get over the support I’m getting,” he said. “It’s overwhelming. The mayors, all the cadet corps, even people on the street. The kids handed out 107 Canadian flags on the street last year.”