Retired businesswoman Erin Hryniuk plans to use proceeds from the thrift store to open a Gleaners society in Calgary.
0
Nov 23, 2019 9:00 AM By: Tammy Rollie 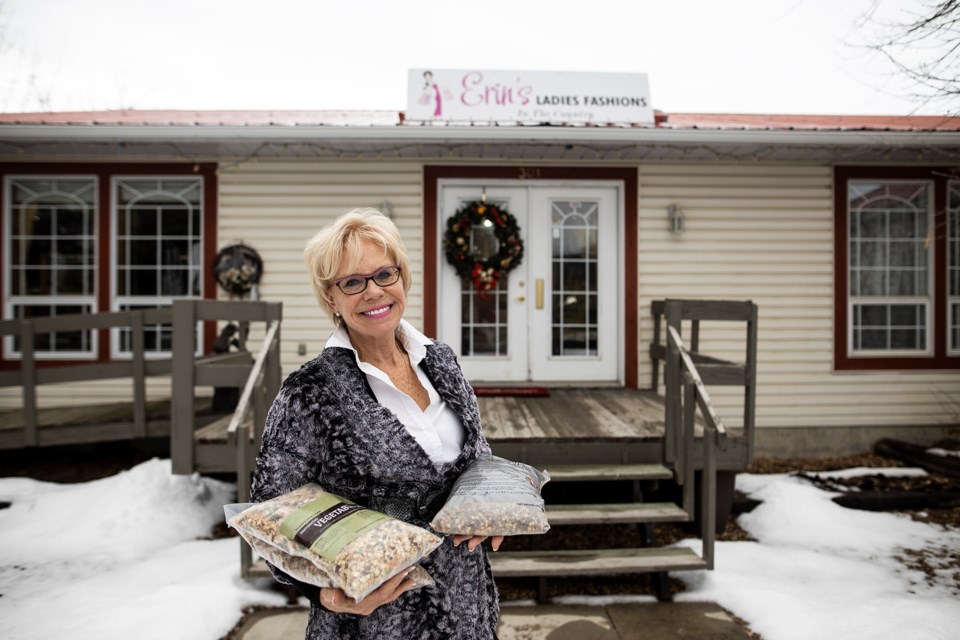 Erin Hryniuk with the freeze-dried food packs she is raising money at her store to distribute through the Gleaners Society charity in Calgary. (BRENT CALVER/Western Wheel)

A retired businesswoman has returned to Black Diamond to turn fashion into a way to feed the hungry.

Erin Hryniuk will open a thrift store on Government Road Nov. 21, where she previously operated Erin’s in the Country, to help pay for a Calgary facility she’s spearheading to feed the hungry in what she hopes will be the next Gleaners Society in Canada.

“Each Gleaners is started by someone like myself,” Hryniuk said in an interview last week. “The Erin’s in the Country building was empty and it seems like thrift stores are now the way people are shopping.”

The retired businesswoman of 35 years is accepting donations of gently used winter clothing for men, women and children at the store, which will be run by volunteers with the goal of raising about $500,000 to purchase equipment for the Calgary facility. A location has not yet been determined.

“We’re helping people find inexpensive clothing while we raise money to get equipment for this building so we can continue to help people by feeding them,” she said. “It’s full circle.”

Hryniuk said she’s currently in the process of getting charitable status for the Foothills Gleaners Society. She established a board of directors, consisting mostly of Calgary business people.

“We have to be a society for a year by government law to apply for charitable status so we’re raising money while we wait,” adding there’s about 10 months left. “The best way for us to do it is to open a thrift store where Erin’s in the Country was. Let’s take care of those who don’t have enough food.”

For the past 30 years, Hryniuk has been a volunteer with the Calgary Food Bank, assisting with such programs as turkey drives and diaper drives.

“I have a huge passion for feeding the hungry,” she said.

Hryniuk said she learned about the Gleaners societies last spring and was enthusiastic about starting her own.

The Gleaner facilities accept truckloads of vegetables that local producers were unable to sell, often due to blemishes and imperfections, and chose to donate instead of disposing.

“There is so many vegetables and fruits that are wasted and the landfills are full of them and it creates huge methane gas, which is bad for the environment,” said Hryniuk said. “We’re trying to encourage people to stop buying too much and throwing it away. That’s just part of it.”

At the facilities, volunteers clean, chop, sort dehydrate, mix and package the vegetables before they’re distributed around the world by charitable organizations. The soup mix bags, which contain 100 servings of soup, go to relief agencies, missionaries and short-term outreach teams doing relief work.

“We’re going to support local, national and international people in need,” she said.

Hryniuk said the term “gleaners” is a biblical reference, referring to people in need who picked up leftover crops farmers purposely left in their fields after harvest.

The Calgary businesswoman said she expects a lot of support in Black Diamond, going by her previous experience as a business owner in town.

“Black Diamond is a wonderful town, it’s very supportive,” she said. “We’re looking forward to continued support from the people of Black Diamond and the surrounding area.”