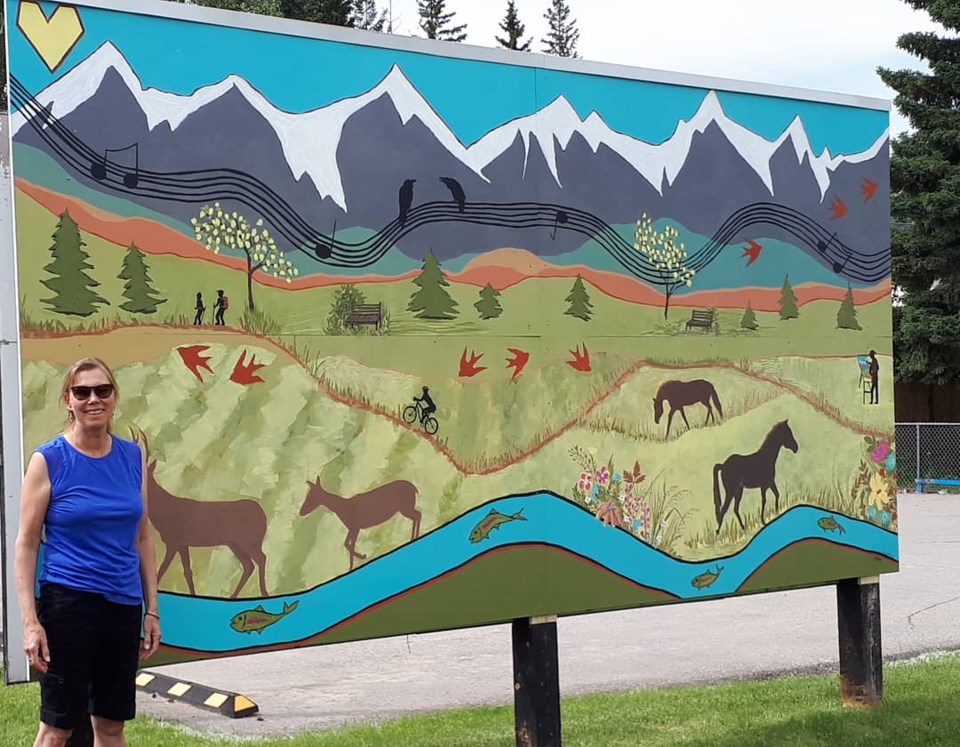 Mady Thiel-Kopstein stands in front of the mural she created for the Town of Black Diamond, located in the municipal building parking lot. (Photo Submitted)

A whimsical portrayal of Black Diamond and all it has to offer is on display for all to see, created at the hands of a local artist.

Thiel-Kopstein was commissioned by the Town to create the mural last spring.

“The art project has been on the Town books for quite a while,” said special events co-ordinator Kelly Tuck. “It was always the intent that we would have a mural on one side and a map of the downtown core on the other.”

Tuck said the Town approached three Foothills area artists with the project before awarding it to Thiel-Kopstein.

“We looked at the work that she’d done and her drawing was very whimsical,” she said. “It just mirrored everything that we were looking for. She did an outstanding job picking up on all the elements the Town was looking for.”

Among them, said Tuck, was featuring wildlife, the arts and the landscape for which Black Diamond is known.

“People love it,” Tuck said of the mural. “They’re taking pictures with it. It’s just adding another element of who we are.”

Thiel-Kopstein said the Town’s interest in her talent was a pleasant surprise, and being awarded the project was an ideal way to spend a few weeks during the COVID-19 pandemic.

“It took a while to get things going because the wood had to be specially ordered and there was a mix up, but it finally came,” she said, adding she got her supplies at RONA Black Diamond.

Thiel-Kopstein cleared out her garage, covered the floor with plastic sheets and drop cloths and got to work.

“I was on my hands and knees for a month, painting,” she said. “I sat in paint a few times and ruined a few pairs of shorts.”

Thiel-Kopstein was tasked to portray Black Diamond’s charms in the mural, but without words.

“I wanted to make it whimsical and happy,” she said. “I feel we need to have that right now because of COVID.”

The mural depicts the mountains, foothills, wildlife, river, music and a diamond-shaped sun – all in bright, cheery colours.

“I was very pleased and happy to do it,” she said. “I had, years ago, done a sign for the library when it was in Black Diamond on a sheet of plywood. It’s sitting behind the library in Turner valley now. I’ve done big projects for schools, but this was the biggest.”

Thiel-Kopstein, who’s lived in Turner Valley for 14 years, said she was honoured to be selected to complete the project during such a challenging time for artists.

“Times are hard for artists right now,” she said. “It was good timing because it’s good to have something to keep you busy.”

Thiel-Kopstein is a participant in The Most Beautiful Art Tour in Alberta and has had her work displayed in the Calgary Stampede’s Western Showcase, Stampede Art Auction and several galleries across Canada.