A Turner Valley committee needs financial support from the Town in order to see its spray park completed this year.
0
May 21, 2014 12:00 AM By: Tammy Rollie 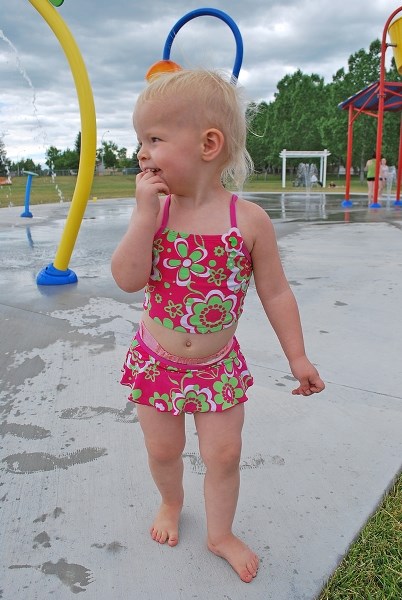 Two-year-old Keanna Young plays in the Okotoks Spray Park in 2011. The Foothills Lions Club Family Spray Park Committee hopes to have a similar park operating in Turner Valley this summer, but are delayed due to unexpected costs.

A Turner Valley committee needs financial support from the Town in order to see its spray park completed this year.

The Foothills Lions Club is facing $110,000 in unexpected expenses for the 31,200 square-foot spray park its been spending the last two years raising money to build east of the Dr. Lander Memorial Swimming Pool. Barry Crane, Foothills Lions Club Family Spray Park Committee chairman and Town councillor, said if the committee doesn’t receive the money from the Town this spring the park won’t be in the ground this year.

“To wait another year would be catastrophic from our point of view, just in the momentum and excitement of the kids,” said Barry Crane, Foothills Lions Club Family Spray Park Committee chairman and Town councillor. “To not see it go in would be heart-wrenching.”

In January town council committed $125,000 to the park if the spray park committee was not approved for a Community Facility Enhancement Program (CFEP) from the Province. The committee learned last week it will receive $75,000 of the $125,000 it requested from the CFEP.

Crane hopes the Town will award the club the money it needs from the $125,000 the Town budgeted for recreation in 2013 and is putting a request to council at an upcoming meeting.

The committee’s decision to include the ultraviolet disinfectant system with the chlorination system came when the committee noticed the last eight spray parks approved in Calgary are installing the same system.

“If we want ahead without it and we had to put it in (later) it would cost us more because we would have to upgrade the system,” he said.

Crane said the committee expects to pay $30,000 for site excavation after a company that volunteered to provide the service at no cost was unable to follow through due to a busy spring schedule.

Work on the spray park began in early spring when Town crews began digging the ground to supply water and sewer to the site.

“To see equipment digging and to know it’s because the spray park is opening this year, there was a whole new energy,” said Crane. “It’s going to be great to see that family time spent here in our own community.”

Minister of Culture Heather Klimchuk announced the $75,000 CFEP grant for the spray park.

“I’m really thrilled with the work council has put in and all the partners that have come together to build this,” she said. “When I see partnership with the city council, with the Lions club, that’s when magic happens. I’m just thrilled that that’s going to go ahead.”

The Foothills Lions Club has been raising money for the park the last two years, collecting $285,500 in donations and fundraising.

“The community support has been tremendous,” said Crane. “We need them to help us finish off this last little push and then we all get to reap the rewards. Hopefully this fall we will be able to play in it and next summer it’s 100 per cent ready to go.”

If the Town approves the funding request, site excavation will begin in June, equipment installation and construction of the washrooms and outdoors showers will occur in July and the park should be operating in September, said Crane. The cost of the first phase of the project is estimated at $486,880.

The park was initially expected to be completed next month, as the committee anticipated receiving the CFEP funding it applied for in December by March 15. The extra expenses and need for additional funding delayed the project another three months.

Fundraising initiatives will continue for the Foothills Lions Club this spring and summer, some of which will go toward the spray park.

Events include a duck derby and barbecues in conjunction with the Diamond Valley Parade and Turner Valley Discovery Days on July 7, a Women’s Wine and Cheese Party on June 28 and the Foothills Lions Club Charity Golf Tournament Aug. 18.

Fundraising in the fall and winter will contribute to the estimated $75,000 needed for the second and final phase of the park including landscaping and the purchase of picnic tables, benches and trees.

For more information about the Foothills Lions Club Family Spray Park or to make a donation to the project contact Barry Crane at 403-933-5385.