More funds needed for Field of Dreams in Black Diamond 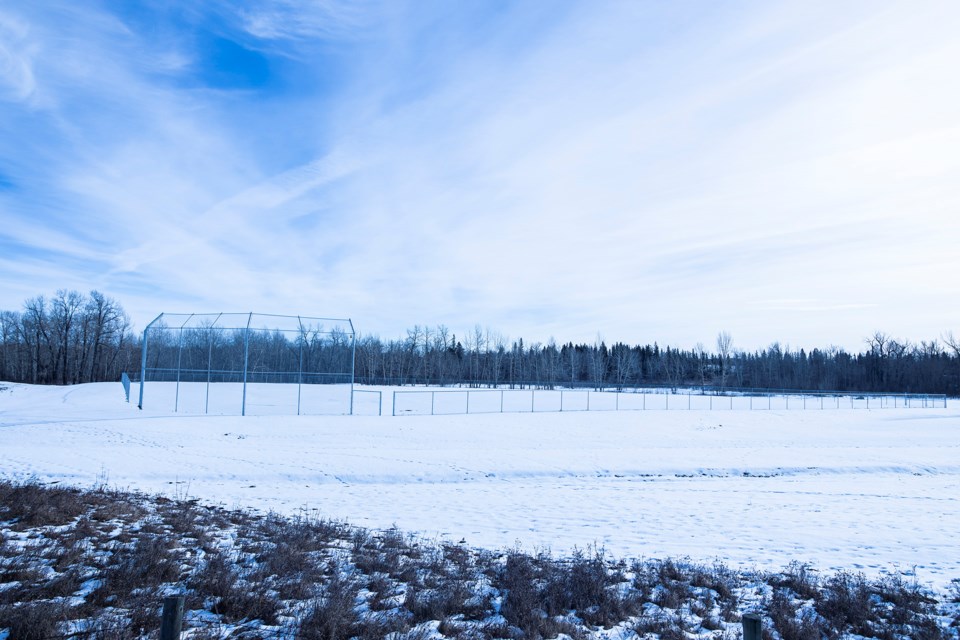 The Field of Dreams baseball diamond between Black Diamond and Turner Valley is expected to be ready for ball in the spring. (BRENT CALVER/Western Wheel)

Baseball enthusiasts could be hitting home runs in Black Diamond’s new ball diamond as early as spring if Mother Nature cooperates this time.

Black bears, endangered cliff swallows, abundant rain and early snow are among the factors that delayed the opening of the $400,000 regulation-sized Field of Dreams ball diamond west of Black Diamond along Highway 22.

If all goes well this spring, Shirley Puttock, chief executive officer of the Boys and Girls Clubs of Foothills, said the ball diamond will open for next season.

“The ball diamond was completed with the exception of the sod, but by the time everything else got done there was frost in the ground,” she said. “For sure we will be playing on it next year.”

The Field of Dreams diamond was made possible after the clubs applied for and received a $150,000 grant from the Jays Cares Foundation, a charitable arm of the Toronto Blue Jays that invests in infrastructure projects through its Field of Dreams grant program to build, enhance or refurbish spaces for youth to play ball, develop skills and learn from positive role models.

The diamond was scheduled to open in summer 2018, but the project was delayed after a bear was in the area for weeks and endangered Alberta cliff swallows were nesting on a pile of dirt in the field.

This year, delays were caused by a wet summer and early frost, Puttock said.

“We have to be patient - weather is something we can’t do anything about,” she said. “We would have loved to have it open for the fall for our children and youth to play on.”

The Boys and Girls Club received $50,000 from Canadian Tire’s Jumpstart Accessibility Grant to construct wheelchair-accessible dugouts, bleachers, pathways and bathrooms, yet Puttock said another $45,500 is needed to cover the remaining cost of the accessibility portion of the project.

“It’s probably an additional $100,000 to build the accessible washrooms, paved accessible parking spots and paved pathways,” she said of the project costs. “It’s a very important part of the project because we want everybody to be able to access the ball diamond. The Boys and Girls Club is inclusive of everyone. To be able to do that you have to have physical barriers removed.”

Puttock said the clubs are working to raise money and apply for grants, and encourage corporate sponsors and donors to assist with covering the outstanding amount. Anyone interested in donating can contact Shirley Puttock at 403-933-7500.

“We will find it, we always do,” she said of the funds. “If we’re unable to raise it we will take it out of our revenue, but now that it’s not ready we have another six months to work on it.”

Puttock said the Boys and Girls Clubs of Foothills pursued the project to make a sports field available for children and youth at no cost for a minimum of 10 years. In colder months, it will be open for snowshoeing and cross-country skiing, she said.

The Boys and Girls Club of Foothills has programs in Black Diamond, Nanton, High River and Blairmore that offer activities to more than 800 youth ages five to 18 from cooking lessons to outdoor play, said Puttock.

During construction, the club received several inquiries from individuals and groups wanting to use the diamond, Puttock said.

“There’s lots of interest,” she said. “We thought it was a good idea here at the Boys and Girls Club and our families thought it was a great idea. To know the majority of the public is interested and pleased about it pleases us.”

Puttock said recreation is an asset in the health of a community.

“Physical health and physical literacy are important for everyone, particularly for our kids,” she said. “They do better in school, their mental health is better. Baseball is something everyone can be included in and play. It’s just another way to connect children and families.”

Black Diamond Mayor Ruth Goodwin said the Town’s parks and recreation department will help with scheduling and maintaining the field once it’s complete.

“I’m excited to find out the scheduling process and who will be the first two teams to play on that new ball diamond,” she said. “It will be up and running for the springtime, I have no doubt.”

A regulation ball diamond behind the Oilfield Regional Arena was removed in 2007 to make room for the Scott Seaman Sports Rink. There are ball diamonds in the town’s two schoolyards, but neither is regulation size.

The Town of Black Diamond provided $77,500 to the Field of Dreams from its recreation reserve fund.