The potential for chain stores opening shop at the east end of Black Diamond resulted in mixed emotions among residents last week.
0
Jul 23, 2014 12:00 AM By: Tammy Rollie 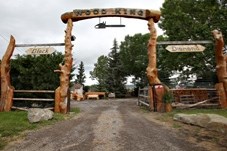 Black Diamond town council voted to rezone the Wood King property as commercial at its regular meeting July 16. A Calgary developer is interested in purchasing the land to build a commercial centre.

The potential for chain stores opening shop at the east end of Black Diamond resulted in mixed emotions among residents last week.

A Calgary developer is proposing to build a commercial centre with a grocery store, retail stores, gas bar, restaurant and commercial space at the existing Wood King property, which is currently for sale. Black Diamond Town council voted at its July 16 meeting to rezone the site from residential to commercial. A direct control designation on the land allowed the existing owner to have a single residence and wood cutting business.

A public hearing held before council’s decision had some residents supporting and others opposing commercial development on the 3.5 acres of land at the intersection of 6 Street and Highway 7.

“It will bring more business to the town and prevent people from leaving town to do their regular shopping,” said Black Diamond resident Audrey Cerkvenac. “If we are attracting people to move here into the beautiful new developments that are being built, we need to be providing them with some services.”

While many residents agreed the potential development would improve business and create jobs, others expressed concerns it could negatively effect independent shops, which represent the majority of businesses in town.

Resident James Lee said he’s not against development, but he doesn’t agree with duplicating businesses.

He questioned how two grocery stores would benefit the community.

“Does the demographics support that?” he asked. “And another gas station? We already had two that packed up their pumps and are gone.”

Sandul’s Pharmacy co-owner Rose Sandul said franchise businesses have a lot of support, while small businesses don’t have that advantage.

“Locally owned businesses invest locally,” he said. “The economic ramification of that is really significant.”

Ryan Darragh, leasing and development manager with Ronmore Developers, interested in purchasing the land, said retails stores would be successful in that location.

“We think it’s a good opportunity to intercept people there,” he said. “It keeps the consumer dollars here, it’s a larger employment base, not to mention providing town residents and some of its patrons with additional product and service offerings.”

Rod Ross, the Town’s planning officer, said the development would not assist in retaining downtown as a primary commercial centre, yet it would capture dollars being spent outside of Black Diamond.

He said the property measures 2,700 square metres and represents 22 per cent of the total commercial area in the downtown and 14 per cent commercial and industrial land within the town’s boundaries.

The Diamond Valley business park is located to the north of the site consisting of retail and service industries and to the south is acreages, condos and houses, he said.

Ross said if the proposal is accepted, a section of Highway 7 would require widening to allow for turning lanes, 6 Street would require paving and infrastructure would need to be upgraded.

“It means that we’re growing and it means that becoming a sustainable and viable community is working,” she said. “It’s good to see growth within the community.”

Brown said it’s critical that residents spend their money in town rather than in Calgary, Okotoks and High River.

“What we need to do is ensure we are all supporting the business community whether it’s going to be a mom and pop downtown or a franchise kind of place,” she said. “Anything to keep dollars in our own local trading area is very important.”