Janelle Mackenzie is stepping out of her comfort zone as Calgary Stampede royalty.
Oct 7, 2019 3:45 PM By: Tammy Rollie 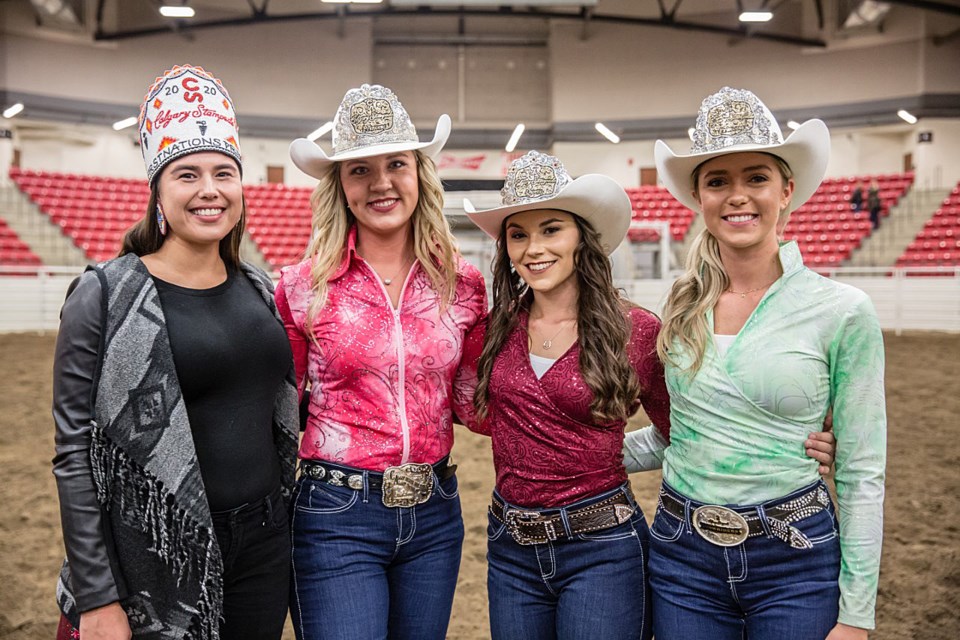 Despite a lifelong dream of becoming a princess, a Millarville heavy-duty mechanic admits it’s not her typical style.

Twenty-four-year-old Janelle Mackenzie, who was crowned one of two 2020 Calgary Stampede Princesses last month, describes herself as a shy tomboy.

“I just thought it would be so cool to do something completely out of my league,” said Mackenzie last week. “I wanted to show young girls out there that they can be a heavy equipment mechanic and a Stampede princess.”

Mackenzie, who enjoys weightlifting, gardening, riding and volunteering at agricultural societies, has wanted to be Stampede royalty since childhood.

“It’s something I had wanted to do since I was a little girl,” she said. “Our family has volunteered for the Stampede for generations. I’m the fourth generation of volunteers in the family and I wanted to carry through that legacy.”

The 2020 Stampede Royalty also includes Kelcey Moore, 22, as queen, Madeline Kerkovius, 22, as princess and Falon Manywounds, 25, as the First Nations princess. They were crowned at a ceremony at Stampede Park on Sept. 23.

Mackenzie, who is on the Stampede Parade Committee’s horse safety subcommittee, said this was her third time vying for the title. She was among 16 contestants this year.

Mackenzie wanted to step out of her comfort zone while being a role model for girls and young women who don't fit the princess stereotype.

“This is completely out of my league and it feels really good to achieve it,” she said. “I really hope I can take that experience and spread it around to someone else out there who is like me shy and a tomboy. I would just advice them to go for it and see what happens.”

Like many Calgary Stampede Royalty contestants, 4-H played a major role in Mackenzie’s life. The Holy Trinity Academy graduate was a member of the Okotoks Outriders for 10 years and the Millarville-Stockland 4-H Beef Club for five years.

It was 4-H that helped Mackenzie overcome a major speech impediment as a child.

“It was not pleasant as a young person, but 4-H makes you prepare and give a speech every year,” she said.

Mackenzie will have plenty more opportunities for speeches and public engagements the next 11 months as Stampede royalty.

Throughout their reign, the queen and princesses make 400 appearances as ambassadors of the Stampede, promoting western heritage and values in Calgary and around the world. Next year’s Stampede takes place July 3-12.

“I’m looking forward to meeting new people, making an impression and showcasing the city with the other ladies,” Mackenzie said. “They have completely different skillsets than I do and I’m very exited to work with them. We’re a very close-knit team already. It’s great to share the role with them and hopefully inspire some young people who are shy like I was.”

Mackenzie entered the competition with advanced horsemanship skills, having showed competitively in breed shows through the American Quarter Horse Association.

The contestants spent an intense month competing, where they were assessed on their ability to interact with the public, speak in public, work as a team and ride. They are awarded their titles based on who has the most points, with the queen having achieved the most.

Tracey Zehl, chair of the Stampede Royalty Committee, said Mackenzie stood out in this group of contestants in many areas, including being kind.

“During the contest when some of the girls weren’t successful she was one of the ones giving a hug and encouraging them,” she said. “With her being a heavy-duty mechanic she’s working in non-traditional roles and is really focused on being open to things and learning and growing.”

“We give them tools to be successful,” she said. “It’s an incredible opportunity to learn and grow both personally and professionally. We want people to feel the hospitality of the Stampede and Calgary.”

For many of the contestants, 4-H has played a huge role.

“4-H is such a great program, especially when it comes to public speaking and engaging with others,” she said. “They have a different confidence because they’ve experienced that. That shows in the contests. We see a lot of ladies coming from that program.”

Zehl said Mackenzie returning to the competition for a third year shows her grit and determination.

“She stuck to her goal and persevered and now she’s about to have what will be one of the most memorable years of her life,” she said. “We want the ladies to take the year and embrace it and learn and grow. To have a little part in helping them become even a better version of themselves is just an amazing experience.”