A Millarville woman is gaining worldwide attention following her decision to give her million-dollar home to the winner of an essay-writing contest.
Jan 22, 2019 1:31 PM By: Tammy Rollie 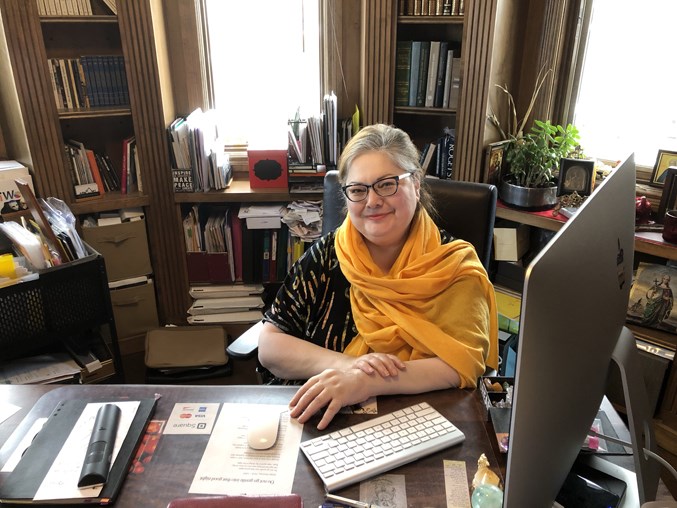 Alla Wagner is inviting people to write letters in a contest to win her approximately $1.8 million Millarville home.

A Millarville woman is gaining worldwide attention following her decision to give her million-dollar home to the winner of an essay-writing contest.

Despite suffering from a chronic illness and being in constant pain, 52-year-old Alla Wagner is spending day and night reading hundreds of letters from people around the world who have responded to her Write a Letter, Win a House contest that began Jan. 5.

“I have read, in three days, 900 letters,” Wagner told the Western Wheel on Tuesday. “I haven’t been able to sleep, I keep getting up and reading. I have over 2,000 at this moment.”

Weeks after a fall in June rendered her unable to walk due to a vertebrae injury, Wagner attempted to sell the million-plus dollar two-storey home she had designed and later moved into in 2011.

“My family is trying to arrange home care for me,” she said. “I’m in my office chair rolling from my bedroom to my office.”

The decision wasn’t easy. The former Calgarian chose the area due to its beauty and abundant wildlife.

“Last year I was fighting not to sell this home,” she said. “I want to be here. It’s painful for me to move away. I’m in love with the wildlife.”

The custom home is about 5,000 square-feet, if one includes the walk-out basement and three-vehicle garage, on an acre of land in Millarville. It boasts three bedrooms, three full baths, two half baths and a wine cellar.

It’s value was assessed at $1.8 million a year ago.

Unable to navigate the stairs without assistance Wagner needs to move into a bungalow but there were no potential buyers for her two-storey home.

“I didn’t get a single offer,” she said. “I was getting so discouraged.”

Then an idea hit her. Wagner recalled her daughter telling her about a contest in the United States a couple years ago that called for people to write an essay to win a historic inn, charging $100 per essay.

She decided to do something similar, requesting a $25 entry fee and hoping for 60,000 entries to recoup the value of the home.

The contest brought Wagner a lot of attention in the form of phone calls, letters and emails. She said she’s been bombarded with questions, applications and even negative comments.

Her realtor experienced the same and cancelled his contract with Wagner, which ended on Tuesday.

Wagner said some people created fake accounts and others sent hateful messages to her, including one who wrote they hope the house falls on her head.

“Friends are telling me, ‘Don’t read them,’ but sometimes it’s impossible not to read,” she said. “People are calling and asking all kinds of strange questions. It’s overwhelming.”

Stubborn and determined, Wagner said she’s not giving up because the contest gets people excited and gives them hope.

“I knew it was going to be a lot of work,” she said. “I’m a workaholic. I love working. I’m not regretting it at all.”

Wagner is running the contest until April 5. Details can be accessed on Facebook by searching for Write a Letter, Win a House.