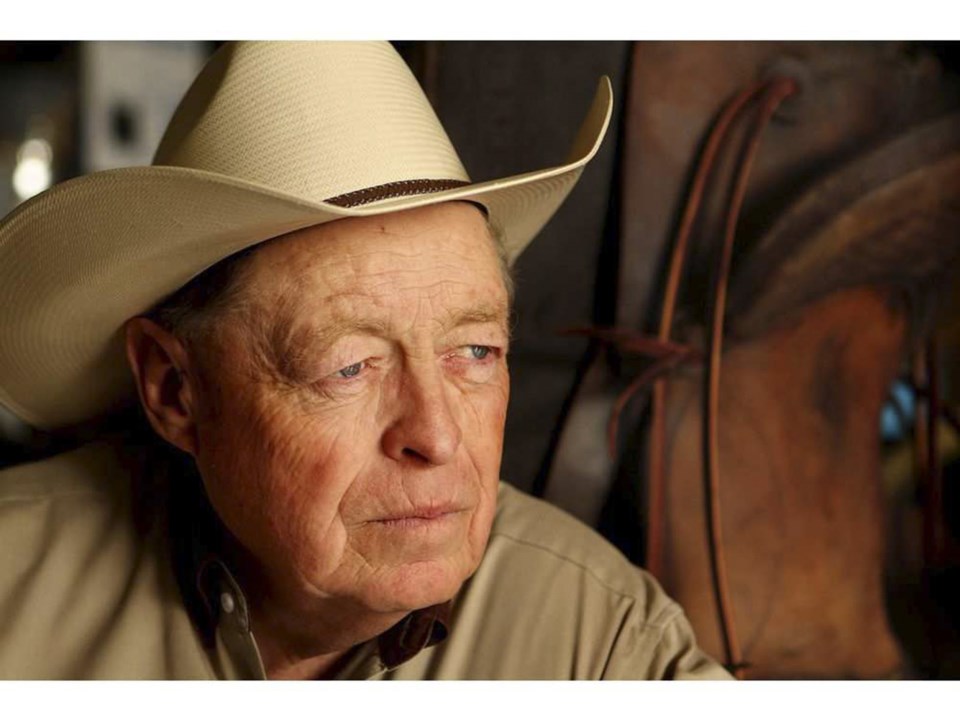 John Scott, whose Longview ranch serves as a western setting for numerous movies, was presented with the Gene Autry Award at the 2019 Wrangler National Finals Rodeo on Dec. 13. (Photo courtesy of Leah Hennel Photography)

A jack-of-all-trades whose Longview ranch has become the setting for numerous motion pictures for decades was given much-deserved recognition last week.

John Scott was presented the prestigious Gene Autry Award for the preservation of western heritage during an awards ceremony at the 2019 Wrangler National Finals Rodeo, the season-ending championship event for the Professional Rodeo Cowboys Association, in Las Vegas Dec. 13. He was presented with a plaque, jacket and shirt.

Scott’s 115-year-old Longview ranch has served as the backdrop for such award-winning films as Days of Heaven, Unforgiven, The Revenant and Legends of the Fall.

For Scott, the award was just icing on the cake.

“It was great to receive it and be acknowledged,” he said. “Over the years I’ve always tried to put a look on the western pictures and try to make it authentic. It’s how we try to preserve the old west, I guess you would say.”

Through his connections in the rodeo circuit, Scott was invited to Hollywood and, in the years that followed, became involved in almost every aspect of the movie industry.

After decades rubbing elbows with famous producers and actors, Scott opened his ranch to the movie industry and served almost every role from supplying and wrangling animals to co-ordinating and performing stunts.

Twenty years ago, he transformed a portion of his ranch into three sets depicting turn-of-last-century settlements.

The first set, built for the movie The Virginian, featuring Bill Pullman and Diane Lane, boasts an old Wyoming-style barn, blacksmith shop, cookhouse and bunk house. A short drive away is a western frontier town complete with several shops and a saloon.

After The Virginian was complete, the cast and crew for Monte Walsh, starring Tom Selleck, descended onto Scott Ranch to add to the sets and to shoot scenes.

A third set was built shortly after for The Legend of Butch and Sundance, about two young outlaws, with rugged buildings that are back dropped by a jagged sandstone cliff above the Highwood River.

The list of movies and television shows shot on Scott’s property exceeds 200. Among them are Hell on Wheels, Diablo and Little House on the Prairie , as well as commercials for Alberta Beef, McDonalds, Red Bull and Travel Alberta. Six films shot on his ranch received Academy Awards.

To Scott, it’s all about preserving the western way of life.

“Western life is under attack by animal activists and people who don’t appreciate the western rural life,” he said. “A lot of these animal activists don’t understand that thoroughbred horses on a chuckwagon want to run. They enjoy it.”

Scott said the impact animal activists have on western heritage is evident, such as when California’s Alameda County passed an ordinance to forbid mutton busting this year.

“When you have an event like that for kids to enjoy and participate in and when that’s taken away from you you’re never going to get it back,” he said. “Those kids are five, six, seven years old, slinging ropes. That’s what they’re raised with and understand and that’s our heritage. If we don’t preserve our heritage it’s going to be lost in the future. Taking mutton busting from the kids, to me, is just criminal.”

With the movie industry slowing down in Alberta, Scott is banding together with others in the industry to revive it.

“We are working very hard with the government right now to try and get our tax credits even with the other provinces and being on an equal playing field to attract the business here,” he said.

“It’s just recognition to the people that are in the western way of life,” Scott said.