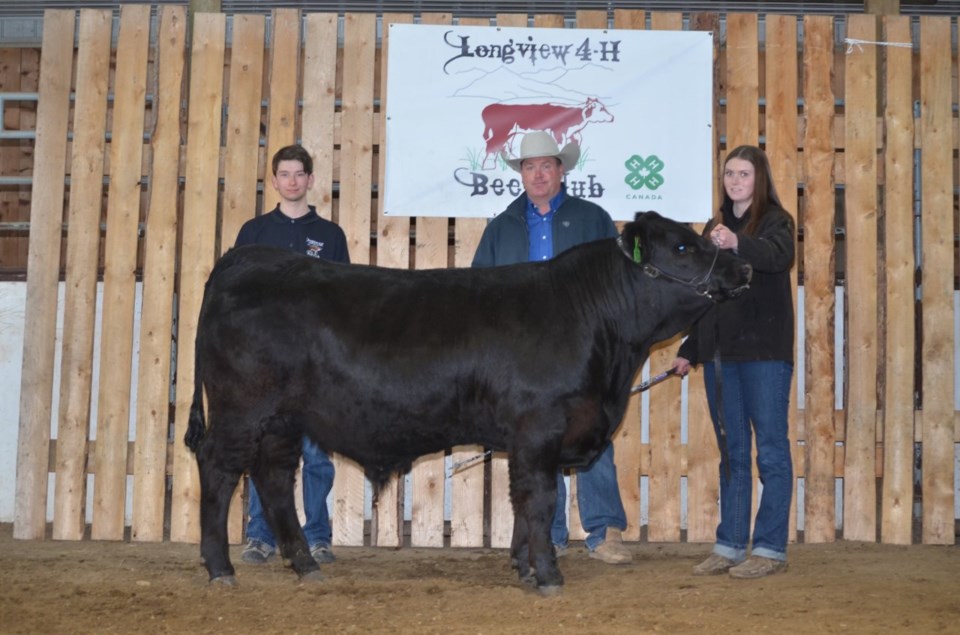 Seven months of hard work paid off for a Longview teen who fervently watched the bids roll in for a steer she raised since last fall.

The 1,405-pound Simmental-Angus - fed, groomed and cared for by Longview 4-H Beef Club member Erin Hughes - raised $42,000 for the High River District Health Care Foundation during the club’s online sale on May 24. The club has raised $440,000 through the donation steer project over the years for the foundation.

The Oilfields High School Grade 12 student raised Big Ed, a steer she and her father Stephen picked out from their Chinook Ranch herd, by putting the 4-H motto into practice: Learn to do by doing.

“I fed him twice a day and cleaned the shed out so he had bedding,” Erin said. “I would also work with him at least three times a week brushing him, blowing him out and bathing him.”

Stephen watched his daughter’s confidence grow as a member of the club the past several years.

“When she was nine and she started, she needed my help, but through the years I helped less and less and this year literally didn’t help at all except picking out animals,” said Stephen, the club’s assistant leader. “She did all the work herself. I’ve seen tremendous growth in her handling the animals and her ability to clip them properly.”

“That’s the reward for all of the hard work she did,” said Stephen. “I’m glad it paid off for her because she put a ton of effort in.”

Easter Slopes Philanthropy, a group within the Longview 4-H Beef Club that collects donations to buy the donation steer each year, paid $36,000 for Big Ed before donating him back to be auctioned off. The winning bid went to High River's Steven Muth with Transcend LLP for $6,000.

“That’s a tremendous story of the community giving back to our health care,” said Stephen Hughes. “It’s a very happy story nowadays.”

This year’s show was a big deal for Longview 4-H Beef Club members after last year’s event was cancelled due to the COVID-19 pandemic.

“There was a lot of pride yesterday,” Stephen Hughes said. “Last year we didn’t get a show at all, but this year 4-H got an exception. We got to run the show and have judges, in shifts, to keep the numbers down.”

The club’s nine to 21-year-old members have raised donation steers since 2003, said Stephen Hughes, whose daughters all went through the program.

“They learn about the production side of raising a food animal,” he said. “They learn the value of it and that it takes a lot of work at home to be ready to be able to show the steer. They’ve got to market the steer, find a buyer, sell it and back up what they sell.”

Each year, a club member is selected to raise the donation steer – a high honour for members.

“It’s a different family every year,” said Stephen Hughes. “Erin was happy to take it on this year. She did a great job with Big Ed.”

He said Cargill Foods contributed the approximate $1,700 cost for Big Ed’s value, feed and bedding the past seven months.

“That’s a way for Cargill to give back to the community,” he said. “That, and the amount of money we raised in donations, speaks to the quality of the people and businesses in our community.”

The Longview 4-H Club was the recipient of the heath-care foundation's  Clifford and Louise Lougheed Award for outstanding philanthropy in 2017.