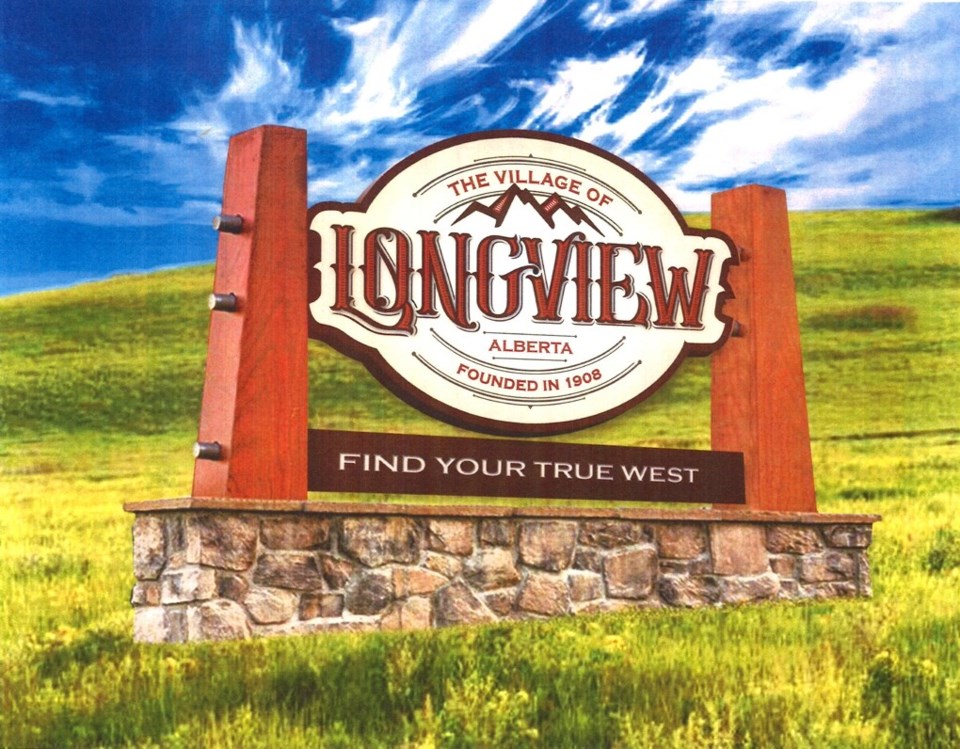 A mock sign using the new Longview logo, which will be used on some promotional material. *Note, the date will be changed from 1908 to 1938. (Image courtesy of the Village of Longview)

With a brand now in place, the Village of Longview is developing plans to make the small Foothills community more appealing to visitors.

“By council unanimously accepting the new brand, it means we now have a professional, inviting, tell-tale brand to use in promoting our village to increase tourism and help Longview remain sustainable,” said Christina Weir, subcommittee member and village councillor. “I’m just very happy and proud that council recognized the need, and the efforts of so many, to bring this initiative to fruition.

The subcommittee unveiled a proposed logo and tagline last fall after gathering feedback from the public via surveys and open houses.

The logo is oval shaped, featuring the mountains, the words “The Village of Longview, Alberta, founded in 1938” and the tagline “Find Your True West.”

Weir said the logo won’t replace the existing cartoon cowboy riding a pump jack with the words “Longview, Alberta,” which was designed by the late Ann Kirk about 30 years ago, but it will be used on some promotional materials.

“In the future, the economic development committee would use the brand and tagline in promotional guides for Alberta, as well we would like to get a tourism website up and running, but with limited resources these things take time,” she said. “We are also discussing new signage for the village. Many think it would make for an amazing sign, but again with our costs going up and government support decreasing this, too, will take some time to execute.”

Branding was identified as a priority in the Village’s Integrated Community Sustainability Plan in 2010, during which time an economic development committee was formed.

In 2016, the committee established an economic development plan listing branding as the top goal and objective.

A subcommittee was created, consisting of nine residents with diverse background and ties to the community, who gathered public perception on Longview’s image and worked with Travel Alberta to develop a brand.

Longview council approved the committee’s brand identifier as “western” in early 2017 and the committee began working with marketing agency Whoville YYC to create a western brand and tag line.

The logo and tagline were unveiled at an open house last fall.

Jeff Nelson, a member of the economic development committee, said the next step is putting up new signage at Longview’s four entrances.

“Black Diamond has nice signs at the entrances, so we want something similar, but it’s going to take us a while to get funding for that and get them built,” he said. “I don’t even know if we can do all four at once.”

Nelson said the existing signs are plain and don’t speak to the village’s uniqueness.

“One sign says ‘Gateway to the Kananaskis,’” he said. “We don’t like the word ‘gateway’ because we don’t want people to dive through, we want them to stop.”

The role of the economic development committee is to find ways to get people out of their vehicles, rather than passing through Longview, Nelson said.

“A lot people came through Okotoks, Black Diamond and Longview to access the Cowboy Trail, but now when you do your GPS from Calgary it skirts you around Longview,” he said. “We’ve lost a bit of traffic.”

Nelson said he’s excited about the brand being approved by council.

“It will make a bit of difference to the image and make it a little bit more professional, a little bit stronger,” he said.