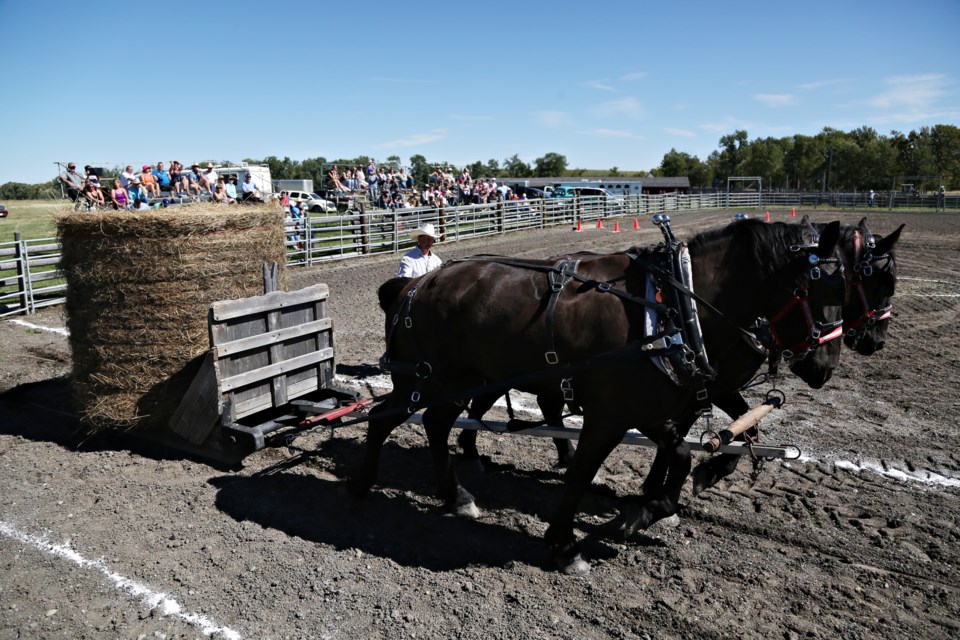 After years of taking home belt buckles and cash prizes from inside the arena, a Calgary cowboy is taking a turn as a judge.

Dwight Beard will scrutinize the skills of teamsters from across southern Alberta as one of two judges in the Bar U Ranch National Historic Sites’s chore horse competition this month after competing in the challenge for almost two decades.

The event, a timed obstacle course that challenges cow folks to perform tasks relating to chores one would complete on a farm or ranch like loading materials and hitching and moving wagons, takes place Sept. 20 at 1 p.m.

“I found myself this year without a new team that was fitting and I thought I would see if they needed a judge,” said Beard. “I enjoy watching other teamsters and I enjoy watching the guys getting better.”

Having been in the arena many times, Beard said he took into consideration what he liked about past judges and what he didn’t before deciding to focus on communication.

“I will explain to them at the start exactly what we’re looking for and at the finish why they may have won or not,” he said. “I think that’s what anybody ever wants in the long run.”

Beard estimates he won about half of the Bar U Ranch's chore horse competitions, but never with the same team.

“You can be a heck of a lot prouder if you go back and win with a brand new team,” he said. “I think it’s just fair and helps entice people to come and join in if it doesn’t look like one guy is cleaning house all the time.”

Beard said one of his secret weapons is mules.

“I’ve competed quite a few times with mules,” he said. “I’ve had a lot of mules over the years and they drive every bit as good, if not better, than horses. I won one year with a one-horse, one-mule team.”

Beard sees the competition as a test of skills in controlling one's animals.

“It’s a very good challenge to people that have regular type farm pleasure horses to figure out how precise they can get on their driving,” he said. “A lot of people don’t realize how precise you can get with a team of horses.”

In his years of experience, Beard found the biggest challenge wasn't handling animals but nerves.

“I’ve competed with horses in crowds for years, but you still have to fight your own nerves so that you don’t telegraph that to the horses,” he said. “I’ve seen some very good drivers get into a competition and their nerves end up controlling the horse and they look like they’re brand new. It’s learning how to relax.”

The competition is one of the few events the Bar U Ranch has held this summer in light of the COVID-19 pandemic, said product development officer Mike McLean. Most events were cancelled this summer due to Alberta Health regulations, but McLean said they held off on bumping the chore horse competition as it was near the end of the season.

“We were going to wait and see how things unfolded,” he said. “We can hold it with physical distancing in place. As per the provincial guidelines we’re limited to gatherings of less than 200 people.”

McLean said the chore horse competition demonstrates the partnership between animal and handler, with many teamsters returning year after year to compete.

“The team that can get through the obstacles with the least amount of penalties and the best time is usually the winner,” he said.

This year’s winner will receive a 25th anniversary belt buckle to commemorate 25 years since the historic site opened to the public. McLean said the chore horse competition began in the early 2000s.

The silver anniversary marks an unusual year for the ranch amid a pandemic.

With no international visitors, bus tours, school groups or seniors groups this season, McLean said attendance has dropped considerably. For instance, the month of August saw 1,940 visitors compared to 5,630 the same month in 2019.

Despite the decline, McLean said those who did drop by the historic site this year enjoyed two new additions: the Pekisko Creek hiking trail that leads visitors through parts of the ranch often unseen and the Stoney Nakoda encampment featuring teepees and Indigenous storytelling. A ceremony to take the camp down is scheduled for the afternoon of Sept. 27.