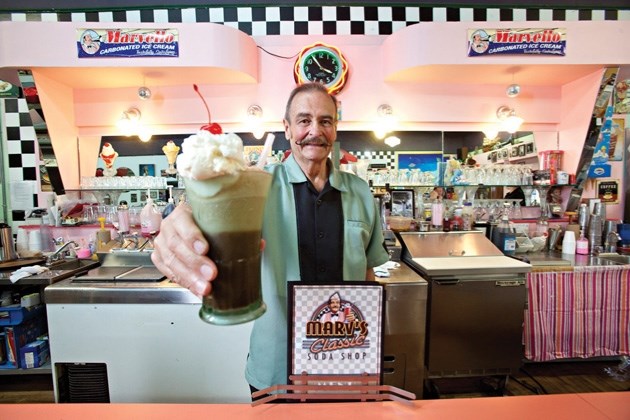 A foothills merchant is bringing the ’50s back to Black Diamond for one day this summer.

Marv Garriott, owner of Marv’s Classic Soda Shop, is celebrating his favourite decade with an Elvis impersonator, vintage vehicles, ’50s tunes and ’50s food to share with his community in his annual Marv’s Rock ‘n’ Roll Classic July 27 from 11 a.m. to 4 p.m. in downtown Black Diamond.

The day’s activities will be similar to past years with Calgary Elvis impersonator Will Reeb serenading crowds, more than 50 hot rods, custom cars and other original vehicles lining a block of First Street West, ’50s cover band Marty Antonini of Calgary entertaining and burgers and hot dogs for sale behind the restaurant.

Marv’s Rock ‘n’ Roll Classic is a collaboration of more than half a dozen merchants in an effort to bring residents and visitors downtown, said Garriott.

This year organizers are trying to spread out the events to benefit other businesses in the area.

With activities stationed at or near his restaurant in past years, Garriott said some merchants were concerned they were contributing money to help fund the event, but weren’t getting any business.

To spread things out, Reeb will perform as Elvis across the street in front of ATB Financial rather than in front of Garriott’s shop.

“I’m trying to encourage businesses along the main street to have a sidewalk sale or anything just to get people when they come to the end of the road so it doesn’t look like Dodge City,” he said. “I’m hoping if we can get people out there on the street it will get people moving down the street and hopefully generate a little bit more traffic going through and people driving through town will see something going on and stop.”

Nelson St-Pierre, owner of the Soft Rock Bistro, began supporting Garriott’s event last year, but said it didn’t attract anyone into his restaurant across the highway.

“Everybody goes to Marv’s and everybody goes to his barbecue after and they have a band playing behind, but nobody is on this side of the street,” he said. “I said I will pay if they do something on the street because otherwise everything happens on that corner and nothing will happen on my street.”

With Elvis performing next door to his restaurant, St-Pierre expects to see some customers on Sunday.

Garriott said he is partnering with the Diamond Valley Chamber of Commerce to revamp the event so more businesses can benefit from Marv’s Rock ‘n’ Roll Classic in upcoming years.

“This will be probably the last year of this particular format,” he said. “We are going to see if there is something we can do for next year that would be a little more collaborative towards business and expanding it to see what else we might be able to do. Hopefully somebody will come up with some bright ideas and add some more to it next year.”

With last year’s event less successful than previous years following the devastation southern Alberta communities experienced during the 2013 flood, Garriott has high hopes for this year.

Many Black Diamond merchants suffered losses when Highway 22 was closed for repairs, and although the highway reopened to traffic three weeks later tourism in the area was down drastically from previous years – something many merchants and town activities felt in 2013.

“Attendance last year was down somewhat,” he said. “The year before was quite a bit better.”

Garriott expects that will change this year. He said Marv’s Rock ‘n’ Roll Classic is advertised in a car show calendar and he already received emails from various car clubs expressing an interest in posting the event on their websites.

“I think we’re going to wind up with a pretty good turnout this year,” he said. “It just gives us more exposure and more people come to town.”

To learn more about the event go to www.marvsclassicsodashop.com