A group of local firefighters can’t imagine not having the proper safety gear before venturing into a burning building, but in Mexico that is the reality.
0
Mar 8, 2017 12:00 AM By: Tammy Rollie 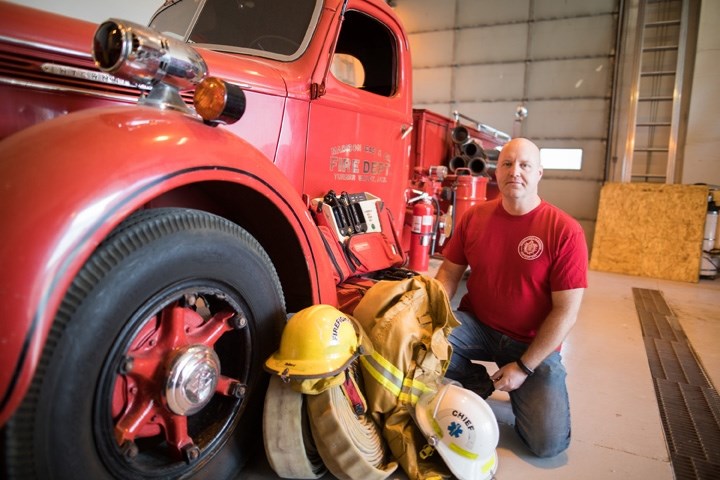 A group of local firefighters can’t imagine not having the proper safety gear before venturing into a burning building, but in Mexico that is the reality.

Turner Valley Fire Chief Glenn Baxter was shocked to learn how ill-equipped Mexican firefighters are. Nine years ago he learned about the Angels for Mexico non-profit charity, which supplies emergency service equipment to fire halls in impoverished regions.

Baxter saw for himself how little they have when he joined Angels for Mexico volunteers on a trip to Puerto Vallarta in 2009 to outfit a fire hall.

“They had one bunker jacket so the first guy there gets the jacket,” he said. “They have very little. Since we started helping they are fully equipped, the next community over is fully equipped and it’s spreading in the outlining areas.”

The Turner Valley Fire Department has supported Angels for Mexico for all of its 10 years by donating equipment that’s surpassed its regulated shelf life. The Black Diamond department has also contributed.

Each year, Baxter joins volunteers to provide supplies and train firefighters. This fall he will travel to Zacualpan.

“If we have the skills and resources, why shouldn’t we share what we have and the knowledge and ability to help them along,” he said.

The experience for Baxter, who is now on the Angels for Mexico board of directors, has been both humbling and rewarding.

“I like watching how the firefighters down there have grown and improved over the years we’ve been working with them,” he said. “It’s very rewarding to watch them all grow and change and their sense of pride makes it all worth it. Their pride and worth is tenfold since we started.”

Equipment is currently being collected to equip the Zacualpan fire hall, which Baxter said is a 10-by-12-foot chicken coop with a tin roof and chain-link fence. His department is supplying some fire hose, rescue rope and a breathing apparatus, he said

“The volunteer firefighters use their own personal vehicles as the fire trucks,” he said. “They have no gear at all. We will bring gear and training to better service their communities and we’re going to try to build them a more substantial fire hall.”

Before heading south, volunteers create a wish list based on the needs of the recipient fire hall and puts out a request to fire departments across southern Alberta that have those items in surplus, said Baxter.

This includes ropes, vehicle extrication equipment, nozzles, hand tools and bunker gear like helmets, boots, jackets and pants and even trucks deemed no longer safe in Canada due to age, he said.

“Some of the things we need are tough to find,” he said, adding some municipalities have policies requiring the equipment be disposed of a certain way.

Angels for Mexico founder Christena Callaghan said the Zacualpan fire hall has no equipment, no gear and nine volunteers.

The first fire hall Angels for Mexico assisted had 44 firefighters, one firefighting coat, no gear and no helmets, she said.

The fire chief in Puerto Vallarta approached Callaghan while she was participating in a clothing drive. Callaghan had collected 71 boxes of winter clothing.

“I went to the fire hall and I thought it was insane,” she said. “These guys are walking into burning buildings in T-shirts. I though this is wrong on so many levels. These guys have literally nothing.”

What began as an initiative to help one fire department turned into a charity event.

“The word has spread,” she said. “In the 10 years, we’ve probably sent down $10 million worth of equipment and gear. To watch these guys put on the uniforms that they should have anyway, it’s like watching them grow two feet. They all have Canadian flags on them and they wear them so proudly. I could see the pride as they put this stuff on.”

In one case, repelling gear was donated, which resulted in saving the lives of occupants in a vehicle that went over a cliff, Callaghan said.

Many firefighters donate equipment needed each year and provide critical training and support to their southern colleagues, he said.

“One of the neat things to see is the brotherhood that immediately exists,” she said. “I see these friendship form. These firefighters are so excited that our firefighters even care.”