Legion of monsters to give residents a scare

Foothills residents daring to enter the Turner Valley legion this Halloween might want to hold on tight to a loved one.
0
Oct 22, 2014 12:00 AM By: Tammy Rollie 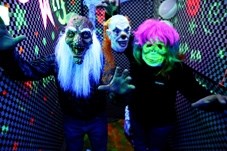 A group of frightening creatures prepare to scare the hundreds of people expected to file through the Legion of Monsters spook house in the Turner Valley Legion Oct. 25-30 from 6 p.m. to 10 p.m.

Foothills residents daring to enter the Turner Valley legion this Halloween might want to hold on tight to a loved one.

The Royal Canadian Legion Turner Valley Branch basement is being transformed into a haunted house, complete with a maze, falling ceilings, graveyard, creepy doll room and frightening characters, with tours taking place Oct. 25 to 31 from 6 p.m. to 10 p.m.

The mastermind behind the Legion of Monsters is Black Diamond’s Jessie Friesen, who has been directing her group of minions since mid-September to create the freakiest spook house yet.

“We’ve made it really big this year,” she said, adding it will take 20 to 25 minutes for viewers to go through. “When you walk through that door instantly you have a scare and it is nonstop until you get to the end. It’s an 85-year-old building – it’s spooky enough.”

Friesen, the legion’s event chairperson and bar manager, has always had a love of playing pranks on her coworkers and scaring people senseless on Halloween.

“My dad and I used to set up our house every Halloween,” she said. “Since he passed away it seemed like that’s what I should be doing. I think it’s in my nature.”

Friesen has been hosting the event the last six years. Last year, more than 1,000 brave souls from across southern Alberta toured the dark depths of the basement.

“We just know how to scare,” said Friesen of herself and her volunteers. “We’ve almost become professionals at it.”

Twenty volunteers are adding to the creep factor dressed as a doll maker, werewolf, hunchback, grave digger, witch, clowns and other characters lurking in corners and reaching out to grab at people working their way through the basement.

“We built it up so the adults get more of a scare,” she said. “The money we raised from last year we were able to buy theatrical lighting and more in-depth props. It’s a little more hair-raising. When you scare an adult and see their reaction it is worth it every time.”

Creating the spook house can be a challenge as volunteers find themselves limited as to what they can do in the legion’s basement.

“You’ll have an idea and it gets kyboshed because the ceilings are so low and it doesn’t fit,” she said. “You can’t do much to the maze because the drywall is too old.”

Among those creating the Legion of Monsters is Dannie Webster and her husband Ron.

“It’s not for the faint of heart, let’s put it that way,” said Webster. “There are some pretty gruesome things that take place. It’s so pitch black you can’t see until you go to walk by and someone touches you or steps out in front of you.”

This being her first year involved with creating the spook house, Webster is impressed with the detail that goes into it.

“Jessie does a superb job of it,” she said. “She can make something out of nothing. She’s got it set up pretty good.”

Webster, who plays the grave digger on the spook nights, said she would be surprised if anyone going through the basement doesn’t get freaked out.

“I’ve heard a few have gone through and come out absolutely screaming,” she said of last year’s spook house.

“You might think you’re pretty darn brave, but there are some pretty scary areas, even though you know it’s not real. It’s so dark then all of a sudden you’ve got something that grabs you around the ankle or the back of your neck or walks behind you.”

“We are never in the same place twice,” she said.

The Royal Canadian Legion is hosting a free family dance and costume party in conjunction with Legion of Monsters on Oct. 25 from 6:30-10:30 with carnival games, prizes and spooky food specials.

Community members interested in donating candy to be handed out during the Legion of Monsters, or for those wanting a day tour can call the legion at 403-933-4564.