A Black Diamond merchant looking to improve his grocery store had his community backing him at a meeting last week.
Jul 23, 2014 12:00 AM By: Tammy Rollie 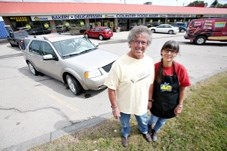 Country Food Mart Ag Foods owners Mark and Rachelle Muller stand on land they plan to purchase so they can expand their store&#8217; s parking lot. Black Diamond council designated the land as commercial at its July 16 council meeting.

A Black Diamond merchant looking to improve his grocery store had his community backing him at a meeting last week.

The property going up for sale is the north half of the grassy area, measuring 1.5 metres wide and 135 metres long, south of the grocery store.

“It’s not being used for a park purpose, but it does provide a separation of land use from the highway to the adjacent mall,” said Rod Ross, the Town’s planning and development officer.

“I had a fender bender in that parking lot,” said Black Diamond resident Terry McBride. “There wasn’t enough room and I hit the corner of a car.”

Dave Brown called the parking lot cramped and said he would also like to see it expanded.

Deputy Mayor Jim Deacon said when the strip mall the grocery store is located in was built the vehicles were smaller than they are today.

“That’s why we had to get rid of angle parking on main street,” he said. “I think it’s totally appropriate to make the parking lot larger.”

Muller said the parking situation has been an issue for years and expanding the lot is part of a bigger plan that includes expanding the store to the west and changing the storefront to fit with the boomtown motif of downtown Black Diamond.

Ross said the next step is to have the property appraised to determined its value before selling it.

Council also approved the removal of municipal reserve designation for the former Water Tower Community Garden at the south end of First Street S.E. It is now designated as residential.

The lot has been vacant since 2008 and a new garden was constructed at a larger site in the northeast part of town in 2009.

Ross told council the property, although in a residential part of town, wasn’t previously designated as such due to a gas pipeline running diagonally through the site. He said the pipeline was since removed and when repairs were done to the street last year water and sewer services were added to the lot.

Rezoning of the property allows for a residential building measuring 30 feet tall, or two storeys which raised concerns for a neighbouring resident.

Terry McBride, who lives south of the lot, wrote a letter and approached council at last week’s public hearing requesting the height restrictions be one storey.

Councillors responded that restricting the height to one storey on only one residential property in town wouldn’t make sense.

Coun. Michel Jackson agreed and asked Ross if someone purchasing a property neighbouring the lot could construct a two-storey home if they chose, to which Ross replied they could.